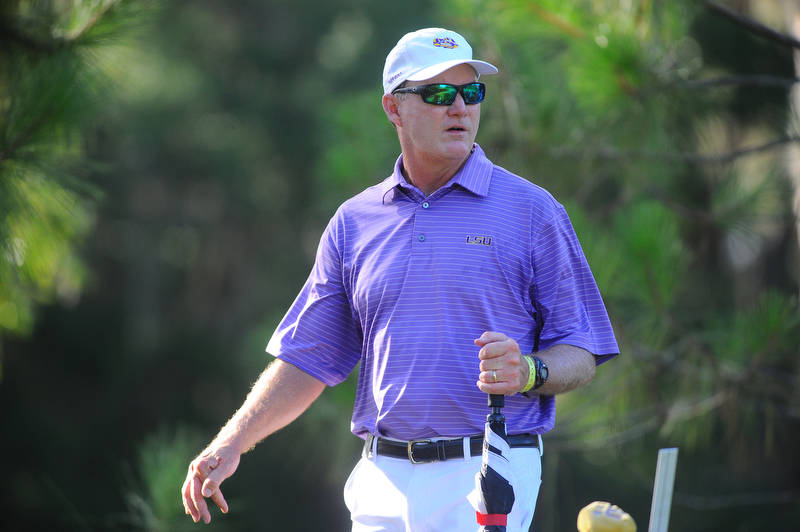 BATON ROUGE – The honors continued to roll in for members of the national champion LSU Men’s Golf program on Thursday morning as head coach Chuck Winstead was chosen as the National Coach of the Year and sophomore All-SEC performer Brandon Pierce also received the title of All-American as a third-team selection by Golfweek.

Pierce added the title of Golfweek Third-Team All-American to an already impressive resume this spring in which he has also been awarded Second-Team All-SEC honors as one of the top players nationally.

Winstead has coached a team that equaled LSU’s program record with five tournament wins during the 2014-15 season, including a sweep of SEC and NCAA championships in recent weeks. The Tigers won a three-shot victory at the SEC Men’s Golf Championships held April 15-17 with a winning score of 13-under par 827 at Sea Island Golf Club in St. Simons Island, Georgia. They followed with a run to the team title at the NCAA Division I Men’s Golf Championships held May 29-June 3 at Concession Golf Club in Bradenton, Florida.

After capturing their 16th SEC championship in the team’s history with their first win at the conference tournament since 1987, the Tigers were then crowned national champions for the fifth time in program history and the first time in 60 years after also winning the NCAA team title in 1940, 1942, 1947 and 1955.

They matched the school’s single-season record of five wins from 1959-60 as they also took home the title at the Golfweek Conference Challenge, David Toms Intercollegiate and Talis Park Challenge in 2014-15.

Pierce broke the previous single-season low scoring average of 71.27 previous set by the great David Toms in 48 rounds played during his senior season in 1988-89. Among Pierce’s eight tournament starts were his total of three top-10 and seven top-20 finishes, including a tie for ninth place at the SEC Championships and a tie for 11th place at the NCAA Championships.

Pierce was unbeaten at 2-0-1 in his three matches to help spearhead the Tigers’ charge toward the national championship including a 2 and 1 win over USC’s Rico Hoey in the NCAA Championship Match.