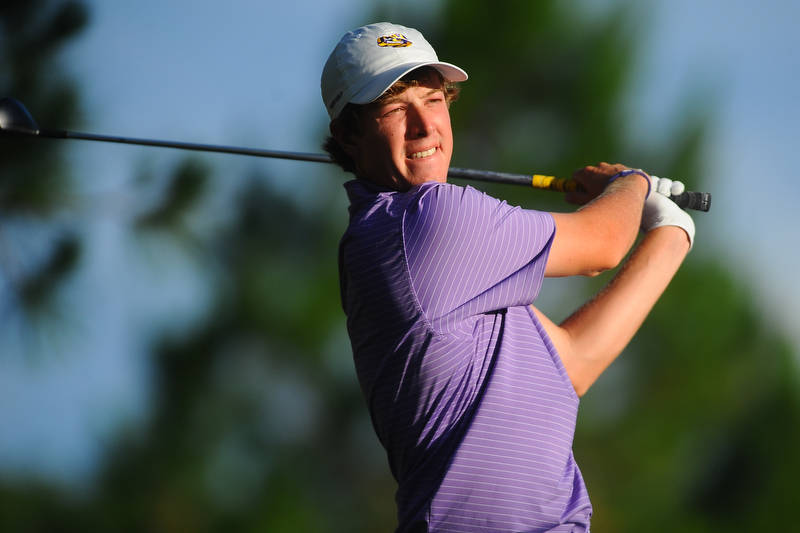 BATON ROUGE – Not only have senior Stewart Jolly, junior Zach Wright and sophomores Brandon Pierce and Eric Ricard each been honored as Second-Team All-SEC selections for their performance in 2015, but each has also been chosen as a PING All-Southeast Region performer by the Golf Coaches Association of America this spring.

The GCAA announced this year’s PING All-Southeast Region team during the recent 2015 NCAA Division I Men’s Golf Championships in which the Tigers were crowned national champions with a 4-1 win over Southern California in Wednesday’s NCAA Championship Match at Concession Golf Club in Bradenton, Florida.

LSU’s All-SEC and all-region quartet was instrumental as they teamed with senior All-American Ben Taylor to win the Tigers their fifth national championship in program history and their first since 1955.

Jolly is a repeat selection as a PING All-Southeast Region performer for the second-straight spring, as he was also recognized by the GCAA for his efforts as a junior in 2013-14 when he was also tabbed a Third-Team All-American by both PING and Golfweek. Jolly ended his collegiate career this spring as one of the Top 100 players in all of college golf as the No. 91-ranked player nationally in the final Golfweek player rankings.

A native of Birmingham, Alabama, posted the second-lowest scoring average of his collegiate career as a senior with an average of 72.68 stroke per round while earning three top-10 and four top-20 finishes in 11 starts in 2014-15. His senior season was also highlighted by defending his individual title at the Golfweek Conference Challenge and tying for fourth place as the top Tiger at the SEC Championships.

Pierce broke the previous single-season low scoring average of 71.27 previous set by the great David Toms in 48 rounds played during his senior season in 1988-89. Among Pierce’s eight tournament starts were his total of three top-10 and seven top-20 finishes, including a tie for ninth place at the SEC Championships and a tie for 11th place at the NCAA Championships.

Pierce was unbeaten at 2-0-1 in his three matches to help spearhead the Tigers’ charge toward the national championship, including a 2 and 1 win over USC’s Rico Hoey in Wednesday’s championship match.

Wright joined Pierce in cracking the Top 50 of the final national player rankings by Golfstat as the No. 44-ranked collegiate player for the 2014-15 season. Wright’s season was certainly highlighted by an unbeaten run in match play at the NCAA Championships where he posted a perfect 3-0 mark in leading the Tigers to the national championship.

Wright enjoyed a breakout junior season in which he posted a career-low scoring average of 72.03 strokes per round for his 11 tournament starts to rank second on the team. He also captured three top-10 and a team-leading nine top-20 finishes on the campaign, including tying for sixth place at the SEC Championships and matching Pierce as the top Tiger at the NCAA Championships by tying for 11th place in stroke play.

Ricard matched Pierce’s effort with an unbeaten 2-0-1 record in match play at the NCAA Championships as one of four Tigers to remain unbeaten through the match play tournament for the national championship. He secured a Second-Team All-SEC and PING All-Southeast Region honor for the first time in his career while posting a career-low 72.11 scoring average to rank third on the team.

Ricard, who ended the 2014-15 season as the No. 61-ranked player nationally by Golfweek and the No. 62-ranked player nationally by Golfstat, was the only Tiger to start all 12 tournaments on their SEC and NCAA title campaign. He earned a team-leading four top-10 finishes along with five top-20 finishes in his 12 starts, including a tie for 27th place individually in stroke play at the NCAA Championships.

The Tigers not only made history by winning their fifth national championship on the links in school history, but they also tied a team record with five wins in a season as they matched their single-season mark with five wins that was previously set during the 1959-60 season. The 2015 SEC Champions and NCAA Champions also took home the title from the Golfweek Conference Challenge (Sept. 14-16), David Toms Intercollegiate (Oct. 4-5) and Talis Park Challenge (March 15-16) during the 2014-15 campaign.