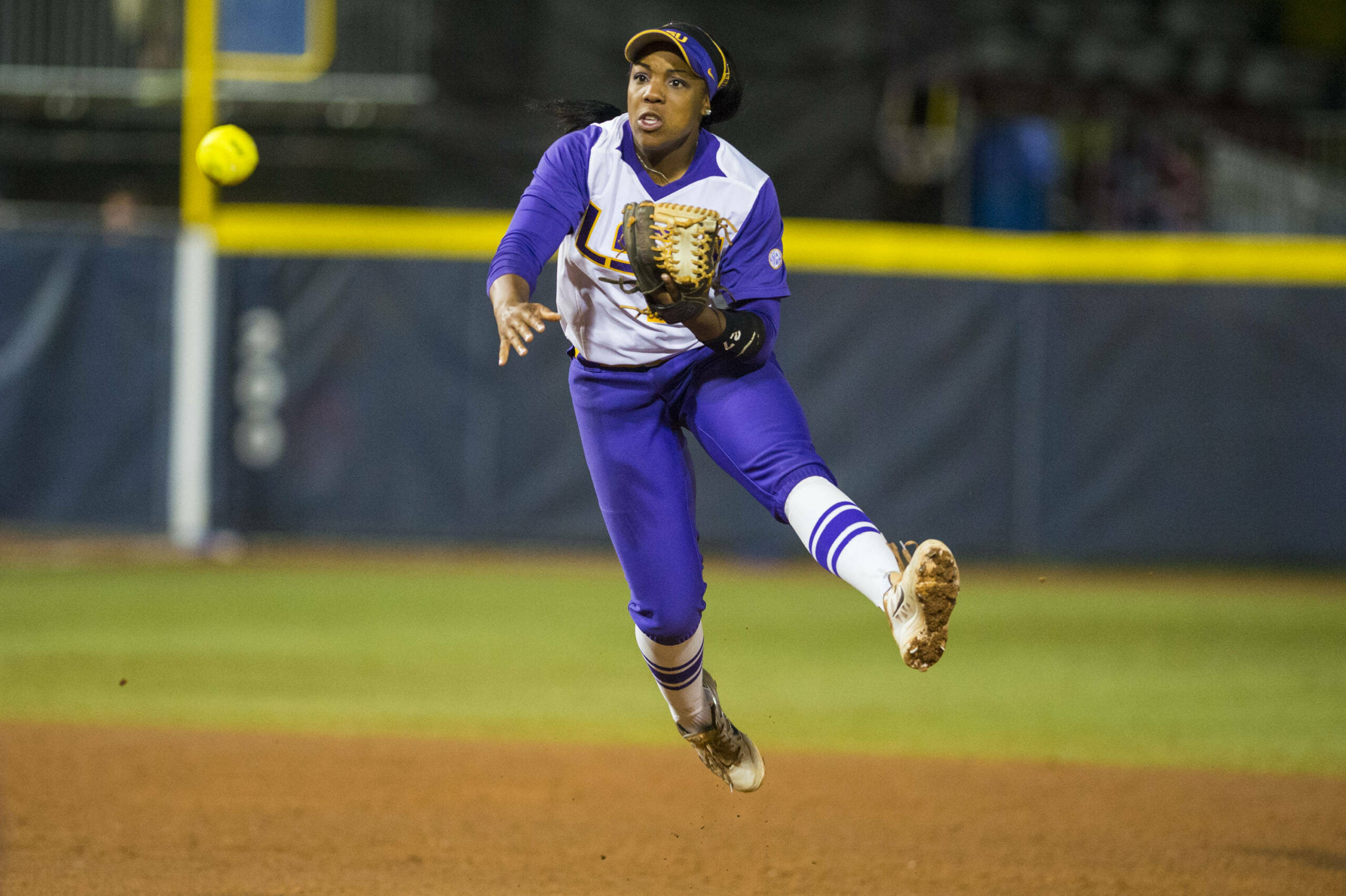 For the third consecutive year, LSU shortstop Bianka Bell is on the All-Louisiana collegiate softball first team. But 2015 was Bell’s breakout season, and as a result she was selected the state’s Hitter of the Year.

Bell, a junior from Tampa, Fla., hit .342 her first two seasons and was the state’s Freshman of the Year in 2013. But this year she hit .459 with 16 home runs and 66 runs batted in. She had 36 extra-base hits, nine fewer than her first two seasons combined, and became the Tigers’ career leader in home runs. Bell led LSU to its first Women’s College World Series appearance since 2012 and its fourth overall.

“She’s finally in the right spot mentally,” LSU coach Beth Torina said of Bell after the NCAA regionals, “and it’s just been fun watching her be one of the best players in the country.”

A Louisiana Sports Writers Association panel of media and sports publicists selected the All-Louisiana team, based on statistics and performances through the teams’ conference tournaments.

LSU, which finished third in the WCWS and 52-14 overall, won three of the state’s five major awards. Freshman right-hander Carley Hoover was chosen Pitcher of the Year, and Torina was named Coach of the Year for the first time. LSU is the first to win the hitting, pitching and coaching awards since Louisiana-Lafayette in 2008. LSU also swept those three awards in 2007.

LSU and Louisiana-Lafayette — an NCAA Super Regional qualifier — tied for the most first-team selections for the second straight year. Each had five, one more than in 2014. It’s the eighth straight year that the Ragin’ Cajuns lead the state in first-teamers.

Hoover, from Clemson, S.C., was the only freshman to make the All-Louisiana first team. She was 14-4 with a 1.85 earned-run average and 147 strikeouts in 125 innings. She pitched four shutouts and had four double-digit strikeout games. Hoover pitched 11 complete games, winning 10 of them.

Torina, in her fourth LSU season, led the Tigers to their best-ever start, 25-0, and their first No. 1 national ranking, which they held for three weeks.

Piancastelli, from Carlsbad, Calif., hit .430 with 18 home runs and 54 RBI, slugged .905 and had a .541 on-base percentage. She was Player of the Year, Hitter of the Year and Freshman of the Year in the Southland Conference.

Tutsch, from Davenport, Iowa, and a transfer from Kirkwood Community College in her home state, outpolled LSU-Alexandria pitcher Marci West 9-6 to win Newcomer of the Year. Tutsch missed 15 games because of injury but hit .341 with nine home runs and 28 RBI and a .500 on-base percentage. She threw out 15-of-31 runners attempting to steal.

LSU’s other first-team selections are outfielder A.J. Andrews, outfielder Bailey Landry and designated player Sahvanna Jaquish. UL Lafayette has three-fourths of the first-team infield — Kelsey Vincent at first base, Haley Hayden at second and Samantha Walsh at third — and the Cajuns also placed Jordan Wallace, the 2013 Pitcher of the Year and a three-time first-team selection.

Andrews made the first team for the third consecutive year. Hayden, an outfielder a year ago, and Jaquish are repeat first-teamers.

Elkins entered nationals with 29 home runs and finished the season with 32, which led all levels of collegiate softball and tied for second on the NCAA all-division season list.

The second team includes three apiece from LSU-Alexandria, which reached the NAIA World Series for the second straight year, and Southland Conference regular-season champion Northwestern State. The Lady Generals’ honorees are Taylor Simon at second base, Kelsey Hollier at third and, for the second straight year, Brooke Thomas in the outfield. The Lady Demons’ selections are pitcher Kaylee Guidry, Brittney Jones at first base and designated player Cassandra Barefield.

Barefield is All-Louisiana for the fourth time and the third time on the second team.

This is the 30th year of All-Louisiana softball selections and just the second time that the Cajuns were shut out on the major awards. The other time was in 2007.