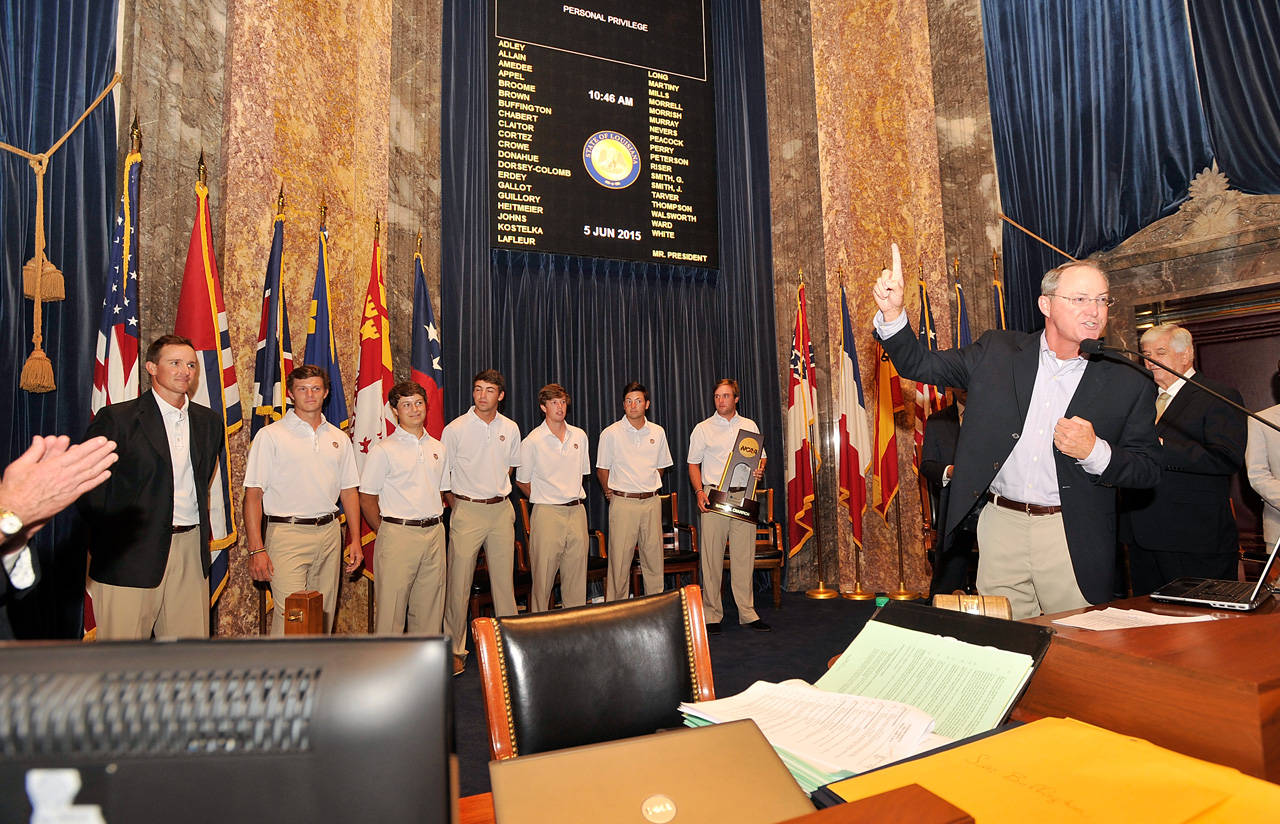 BATON ROUGE – The national champion LSU Men’s Golf team made the trip to downtown Baton Rouge and the Louisiana State Capitol Building on Friday morning where they were honored by the State Senate for bringing the NCAA Championship trophy back to Baton Rouge with their 4-1 win over the USC Trojans in the title match on Wednesday.

The Tigers captured their first national championship in 60 years and their fifth NCAA title all-time on the golf course after also being crowned champions during the 1940, 1942, 1947 and 1955 seasons.

Not only were the Tigers crowned NCAA Champions for the fifth time on Wednesday, but they also kicked of the championship season in April by taking home the SEC Championship for the 16th time in program history and the first time in 28 years since the sophomore season of the great David Toms in 1986-87.

LSU President and Chancellor Dr. F. King Alexander was the first to address the body as he spoke of the team’s achievement and what it means to the University and the State of Louisiana.

“Behind me today are some students who also just so happen to play a little bit of golf,” Alexander said. “These are the national champions of (NCAA) Division I who defeated USC two days ago. We’re all certainly very proud of them. Since the 1950s, it’s been 50 years since we brought this back to Louisiana, and it’s now ours!”

Winstead then introduced his team and shared a few words to the State Senate as they were greeted with a rousing reception from those in the body and the people seated in the gallery above the senate floor.

“Thank you very much for all you do for LSU,” Winstead said. “These guys, they don’t come to LSU just to play golf. They come to LSU for their academics, for the social part of it, everything about it. We know that what makes Louisiana are the people, and we thank you for everything that you do. I’m an LSU guy, I graduated from LSU. It’s a special place as we all know. We can’t thank you all enough for all the support you give us.”

Wright, Pierce, Ricard and Caldwell will return to the squad next season along with sophomore Rhyne Jones as they look to defend their national championship again in the 2015-16 season. LSU will cope with the loss of both Jolly and Taylor to graduation with arguably the nation’s No. 1-ranked recruiting class for 2015, including the No. 1-ranked junior golf prospect nationally in Sam Burns (Shreveport, Louisiana) and top-10 and top-20 ranked prospects nationally in Nathan Jeansonne (Keithville, Louisiana) and Luis Gagne (Orlando, Florida).