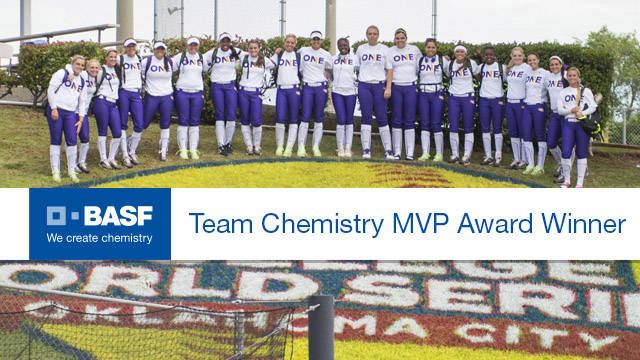 BATON ROUGE – The LSU softball team matched its best finish in program history at the Women’s College World Series with a third-place tie and has been chosen among the university’s athletic programs with the BASF Team Chemistry MVP Award for the month of May.

The Tigers garnered a 52-14 record, the program’s 10th season with 50-plus wins and the first since 2007. LSU also racked up a single-season mark with 21 victories over Top 25 opponents.

LSU had a program record five players secure NFCA All-America honors in 2015 under fourth-year coach Beth Torina headed by Bianka Bell on the NFCA’s First Team. She tallied a .415 batting average and smacked 18 home runs which was a program single-season mark. Sahvanna Jaquish delivered a program single-season record of 76 RBIs, while Bailey Landry registered a team-leading .426 batting average on 89 hits which ranked tied for second place on the LSU single season list. Landry and Jaquish came away with NFCA All-America Second-Team accolades.

In the circle, Carley Hoover and Allie Walljasper notched NFCA All-America Third-Team honors. Hoover posted an 18-7 record and tied a program single-season record with five saves. The 18 wins for Hoover were tied for fourth place for a freshman in LSU history. Walljasper secured a 16-5 mark with 12 of her victories coming against NCAA Tournament opponents.

LSU became the 18th team to win multiple games in the championship round to advance out of the NCAA Regionals since 2005. The Tigers overcame a 3-2 deficit against Arizona State in the 7th inning courtesy of a Landry double down the left field line. Two innings later, Bell delivered the regional-winning RBI single to left LSU to a 4-3 walkoff win.

LSU dispatched of Arizona in the NCAA Super Regionals. The Tigers collected convincing 8-0 and 10-5 victories to clinch its fourth WCWS appearance. Sandra Simmons was the super regionals MVP after she amassed five RBIs in game two to tie a program single-game postseason record.

LSU earned wins over Auburn and Alabama at the WCWS. The Tigers received homers from Bell and Kellsi Kloss coupled with a complete game gem from Hoover during the Auburn win. LSU exploded for five runs over the first two innings, and Walljasper fired six-plus solid frames in the Alabama victory. The Tigers losses in Oklahoma City came against Florida and Michigan who ended up playing in the WCWS Championship Series.