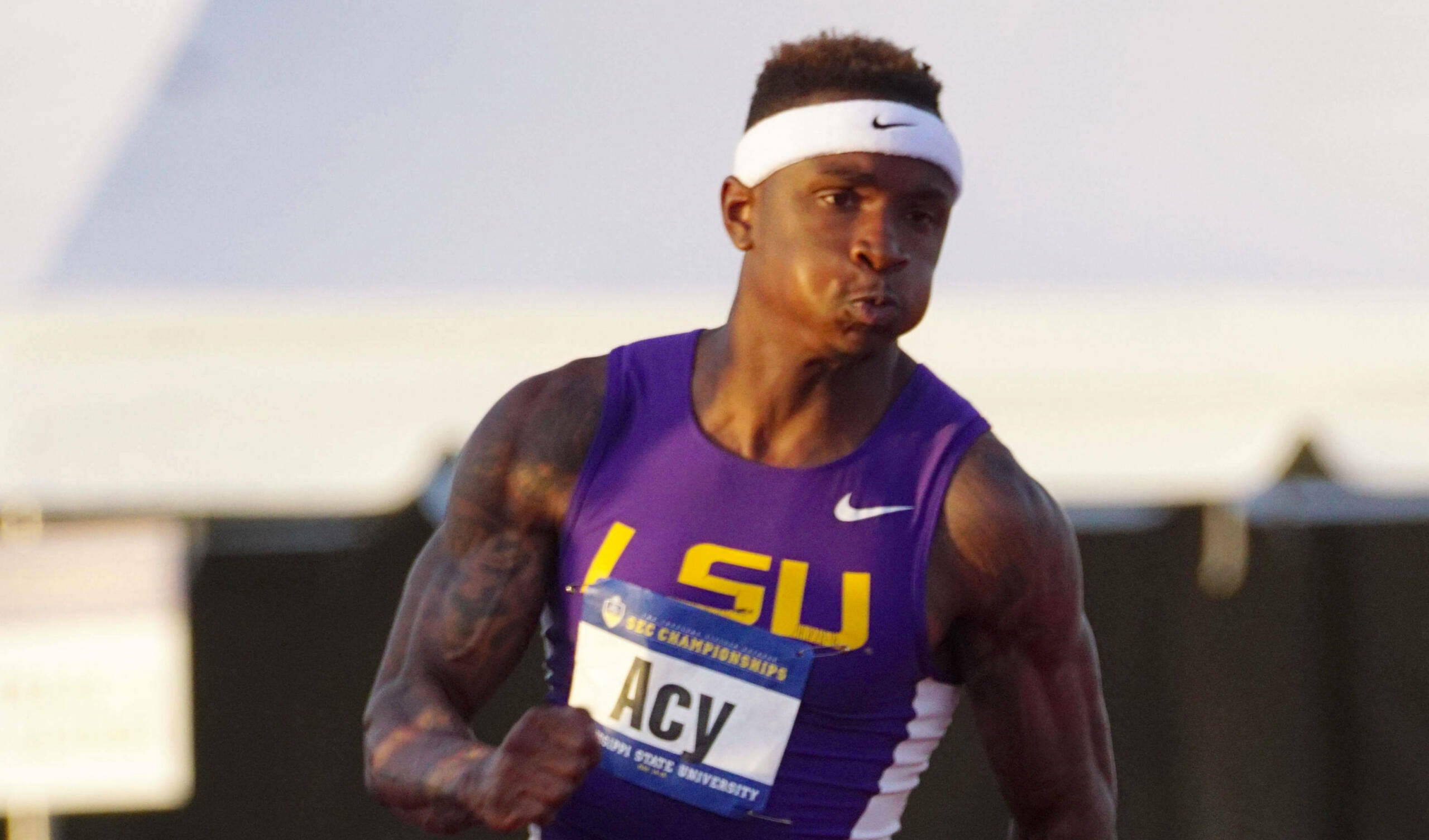 JACKSONVILLE, Fla. – Led by a quartet of heat-winning performances in Friday’s quarterfinals on the track, the LSU Track & Field teams added 10 semifinalists to their squad making the trip to Eugene, Oregon, in two weeks to highlight another successful day of qualifying at the 2015 NCAA East Preliminary Rounds being held at North Florida’s Hodges Stadium.

The Top 12 finishers in each event earn the right to compete in the semifinals at the 2015 NCAA Division I Outdoor Track & Field Championships being held June 10-13 at Oregon’s Hayward Field in Eugene.

Norwood turned in the top performance of the day when he sprinted to an easy victory in the first quarterfinal heat of the men’s 400-meter dash. After qualifying fourth with a heat-winning time of 46.03 on Thursday, Norwood turned up the heat on the rest of the field on Friday afternoon as the only sprinter in the quarterfinal round to break 45 seconds in the event.

Running out of lane No. 6 in the first of three quarterfinal heats, Norwood was fast out of the blocks and took control of the race with a steady rhythm on the backstretch. After making up the stagger on the rest of the field at the 220-meter mark, he powered down the homestretch and through the finish line with a winning time of 44.94 seconds for his third sub 45-second time in five races this season.

Notre Dame’s Christopher Giesting finished nearly a full second behind Norwood in the first heat with a time of 45.66, while Florida’s Najee Glass followed in second place overall with a time of 45.51.
LSU’s reigning NCAA Indoor Champion will certainly be a favorite to complete the NCAA title sweep at Oregon’s Hayward Field in two weeks as his seasonal-best and personal-best time this season of 44.44 is second in the NCAA for the 2015 outdoor season. Only Texas A&M’s defending NCAA Outdoor Champion Deon Lendore (44.41) has run faster than Norwood’s 44.44 this spring.

With his performance, Norwood became the second LSU athlete to set a new Hodges Stadium record on the weekend as his 44.94 smashed the previous facility record of 45.08 set by George Mason’s David Verburg at the NCAA East Preliminary Rounds during the 2012 outdoor season. Lady Tiger senior Tori Bliss threw a stadium record of 57-9 ¾ in a qualifying effort in the women’s shot put back on Thursday afternoon.

“At this time of the year, I’m in great shape. I just wanted to run what I needed to run to get to Eugene. That’s pretty much what I was trying to do here today,” Norwood said following his race. “I knew I needed to try to win my heat to get the best lane possible in Eugene. I did that and had the fastest time, so I’m happy with that.”

Joining Norwood in the quarterfinals of the men’s 400-meter dash were juniors Fitzroy Dunkley and Cyril Grayson they lined up together in the third heat. Dunkley clocked 46.18 for fourth place in the heat followed by Grayson at 46.80 for sixth place in the race as they missed advancing to the national semifinals on time. Dunkley actually missed cracking the Top 12 by one place as he was the 13th-place finisher for the event.

Following Norwood’s qualification, Acy and Ernest joined their teammate on the plane to Eugene with two of the quickest efforts of the day in the quarterfinal round of the men’s 100-meter dash. Acy actually raced to a wind-legal personal best of 10.18 (+0.6) to take the tape in the first heat, while Ernest followed with a sprint of 10.21 (+0.4) for second place in the second heat.

LSU’s sprint duo later wrapped up Friday’s qualifying on the track with a pair of heat-winning performances in the opening round of the men’s 200 meters, as Ernest matched his wind-legal seasonal best of 20.53 (+0.4) to win the fifth heat and Acy clocked a blistering 20.61 (+0.3) to win the second heat with the third-fastest and fourth-fastest times of the round.

Brown, the NCAA’s leading discus thrower in 2015, has given himself an opportunity to compete for the national title in the event, despite leaving it late with his third and final throw of the day.

After opening with a mark of 152-3 on his first attempt and fouling his second attempt, Brown went into the final round of throws in the third flight in 48th place out of 48 competitors in the event. But that’s when LSU’s All-American stepped into the circle one final time and unleashed a throw of 201 feet, 2 inches to catapult himself into second place overall and earn his qualification for the NCAA semifinals in two weeks. He followed only Virginia’s Jordan Young (204-3) in the final qualifying standings in Jacksonville this weekend.

Brown, the fourth-place finisher nationally in the discus final at the NCAA Championships as a sophomore in 2013, will now set his sights on becoming only the second LSU Tiger in program history to win an NCAA title in the men’s discus with a national-leading mark of 213-5 this spring. John Nichols is the only Tiger to be crowned the NCAA Champion in the event during the 1989 season.

“(My heart) definitely stopped two or three times today,” Brown said of needing a big final throw to qualify. “Going into that last throw, I was just like, ‘I guess I can’t mess up any more than I have, so just go out there and think of it like practice.’ I felt good all through my whole practice and through my first two throws. I just kept ripping on it way too early. I needed to stay patient with myself after that.

“I’ve been throwing 200 (feet) all year, so I’ve been doing it long enough to where I knew I had it in me to get one. I just dug deep, and it really clicked at the right time. It was a relief for sure.”

Also adding his name to LSU’s growing list of national semifinalists was Downing, who emerged from the NCAA East Preliminary Rounds as the top qualifier overall in the men’s 400-meter hurdles with his No. 2 time for the season at 49.89. Downing, the reigning NCAA Outdoor Bronze Medalist in the event, scored an easy victory in the second quarterfinal heat with his fourth-straight sub 50-second clocking of the year.

Lady Tiger hurdlers Chase and Gordon continued their outstanding weekend with a pair of qualifying performances on Friday night, advancing to the NCAA semifinals in the 400-meter hurdles and securing a spot in the quarterfinal round of the 100-meter hurdles to lead the charge for the Lady Tigers on the second day of competition.

The duo actually lined up against one another in the third of three quarterfinal heats in the 400 hurdles where they pushed one another all the way to the finish line. Chase edged Gordon at the line in a photo finish for two spots into the national semifinals as Chase earned automatic qualification with a time of 57.51 for third place and Gordon advanced on time with a personal best of 57.52 in the event.

Gordon was not the only Lady Tiger freshman to run a personal best in the event as Kymber Payne missed qualifying on time at 58.14 to place 14th overall as the No. 10-ranked performer in school history.

Chase and Gordon not only lined up in the quarterfinal round of the women’s 400-meter hurdles on Friday night, but they also opened the afternoon by running in the first round of qualifying in the 100-meter hurdles. They cruised into Saturday’s quarterfinals with a pair of second-place finishes in their heats as Gordon clocked a new wind-legal personal best of 13.15 (+1.0) in the second heat for the 10th-fastest time of the day in the and Chase followed with a run of 13.29 (-0.3) in the third heat for the 14th-fastest time of the day.

Not only will two Lady Tigers feature in the semifinal round of the 400-meter hurdles when they arrive in Eugene two weeks from now, but two Lady Tigers also punched their ticket with qualifying performances in the women’s 100-meter dash during Friday action as Hobbs won the second heat in 11.41 (-1.4) and Brisco took third in the first heat in 11.45 (+1.4) to place third and fifth, respectively, in the quarterfinals.

Schuetz will also line up in the NCAA semifinals in the 800 meters for the first time in her collegiate career after advancing on time with a run of 2 minutes, 3.93 seconds as the day’s seventh-fastest qualifier.

Two Tigers lining up in the first round of qualifying in the men’s 110-meter hurdles also cruised into the national quarterfinals as sophomore All-SEC standout Jordan Moore took the tape in the second heat with his run of 13.64 (+1.8) for the second-fastest time of the day and senior Joshua Thompson clocked a windy 13.71 (+2.3) for the fifth-fastest time of the opening round.

Also advancing to Saturday’s quarterfinals on the track was Lady Tiger sophomore Jada Martin, who was the first to cross the finish line in the fifth heat of the women’s 200 meters as she ran a wind-legal 23.08 (+1.3) as the sixth-fastest qualifier on the day. Like all quarterfinalists this weekend, Martin will run for a top-12 finish in the quarterfinal round to earn her spot in the national semifinals in the sprint race.

“We’re continuing to do the things we need to do to give ourselves the best opportunity we can to compete when we get to Eugene,” said LSU head coach Dennis Shaver of his team’s performance on Friday. “There is still another important day for us here tomorrow, and we need to go out and compete as well as we have to this point to finish strong here in the prelim rounds.”

In addition, senior Tori Bliss opened Friday’s events with an appearance in the women’s discus throw as she posted a top throw on the day of 156-3 for 31st place in the competition. Bliss has already scored her ticket to the NCAA semifinals in Eugene as the top qualifier in the women’s shot put during Thursday’s opener with a mark of 57-9 ¾ to her credit.

Senior Andreas Duplantis wrapped up his collegiate career on Friday by just missing out on a Top 12 spot to qualify in the men’s pole vault as he cleared the bar at 16-10 ¾ on his first attempt to tie for 13th place.

Like Duplantis, Lady Tiger sophomore Nataliyah Friar missed qualifying for the national semifinal by one place when she jumped a series-best of 19-10 ¾ on her third attempt to finish in 13th place overall in the women’s long jump. Friar will have an opportunity for redemption in Saturday’s finale at the NCAA East Preliminary Rounds when she returns to the runway for the triple jump.

The Tigers and Lady Tigers will have 14 more opportunities to add to their rosters heading to Eugene in two weeks when they return to Hodges Stadium on Saturday to finish off the 2015 NCAA East Preliminary Rounds in Jacksonville. The action begins at 3 p.m. CT with their first field events of the day, followed by the first quarterfinals on the track beginning at 5 p.m. CT.