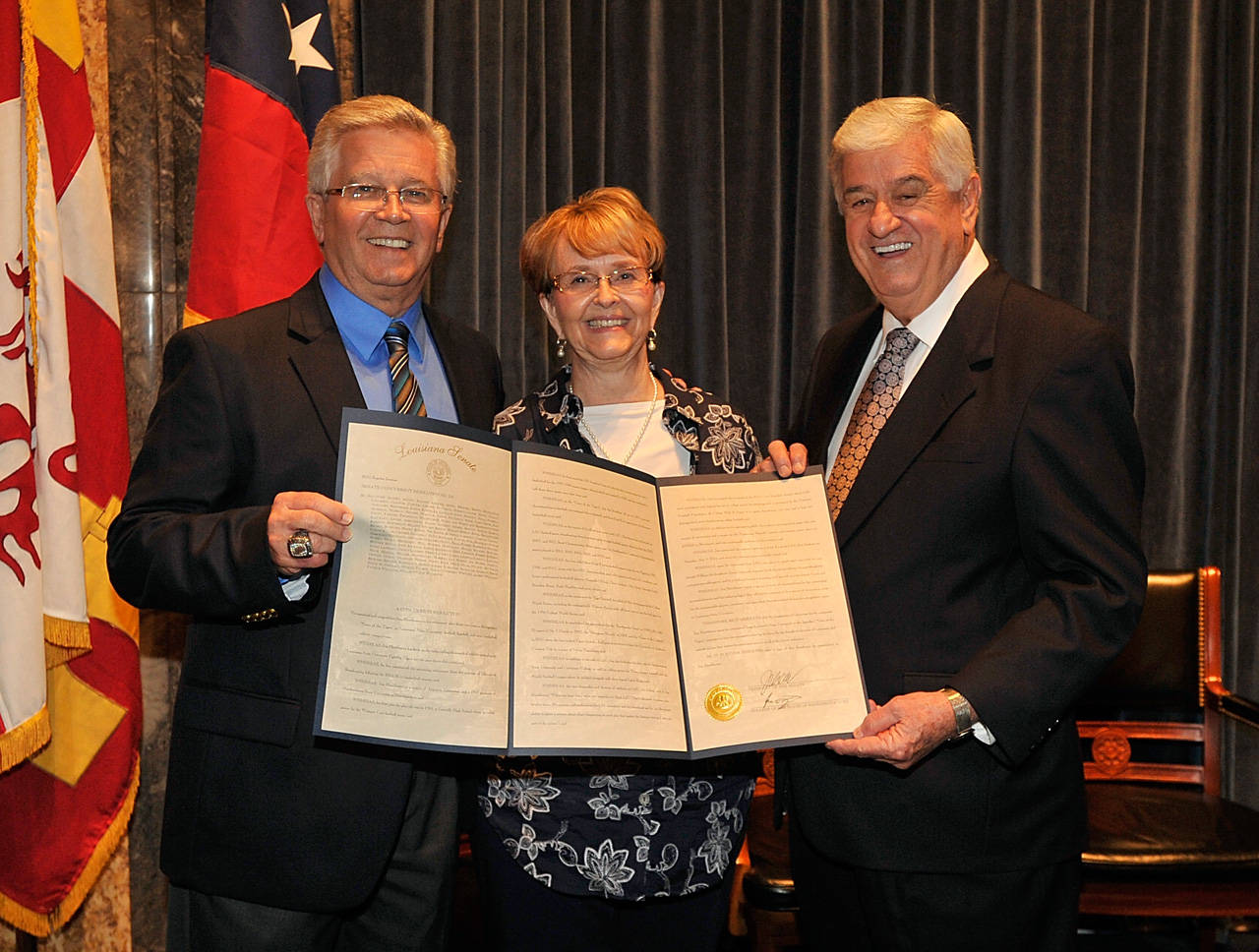 BATON ROUGE — “The Voice of the Tigers” Jim Hawthorne sang “God Bless America” for the Louisiana House of Representatives, addressed both houses of the legislature, and was honored with a concurrent resolution on Wednesday at the State Capitol.

On Feb. 11, Hawthorne announced that he will retire following the 2015-16 LSU Men’s Basketball season.

Along with his wife Carol, Hawthorne, who has been a radio play-by-play voice for the LSU Sports Radio Network since 1979, met privately with Speaker of the House Rep. Charles E. “Chuck” Kleckley before being introduced to the Louisiana House of Representatives.

Hawthorne sang for the body and was allowed to address the members before the resolution (below) was read by Rep. Frank Hoffmann of District 15 in Monroe. Hoffmann also serves as the radio play-by-play voice of Louisiana-Monroe football.

Along with a similar message to the House, Hawthorne mentioned that he wished the late Rep. Donald Ray Kennard – who was Hawthorne’s spotter on LSU football broadcasts until his death in 2011 – was able to be present for this special occasion.

A video compilation of Hawthorne’s LSU baseball national championship calls was played for the representatives, and Hawthorne took photos with many of the members before moving across the Capitol to the Senate.

The video was again showed to the senate before President of the Senate, Sen. John A. Alario, suspended the rules to allow Hawthorne to address the chamber.

Highlight video played for both chambers of the Louisiana Legislature:

View the text from the Senate Concurrent Resolution honoring Hawthorne below.

A CONCURRENT RESOLUTION
To commend and congratulate Jim Hawthorne on his retirement after thirty-two years as the legendary “Voice of the Tigers” at Louisiana State University football, baseball, and men’s basketball athletic competitions.

WHEREAS, Jim Hawthorne has been on the radio calling thousands of athletic events for the Louisiana State University Fighting Tigers for the past thirty-five years; and

WHEREAS, he has announced his upcoming retirement from the position of Director of Broadcasting following the 2015-2016 basketball season; and

WHEREAS, Jim Hawthorne is a native of Anacoco, Louisiana, and a 1967 graduate of Northwestern State University in Natchitoches; and

WHEREAS, his first play-by-play job was in 1961 at Leesville High School where he called games for the Wampus Cats football team; and

WHEREAS, he first joined the LSU broadcast team as a play-by-play commentator for men’s basketball for the 1979-1980 season, began calling football and baseball in 1984, and has continued to call those three sports since that time; and

WHEREAS, as the “Voice of the Tigers”, Jim has broadcast all six of LSU’s national championships in baseball, two national titles in football, and three Final Four appearances for the men’s basketball team; and

WHEREAS, in the course of his illustrious career with LSU, Hawthorne has not missed an LSU football game, broadcasting three hundred eighty straight football games, which include the 2003, 2007, and 2011 Bowl Championship Series games and the Southeastern Conference championship games played in 2001, 2003, 2005, 2007, and 2011; and

WHEREAS, Jim has called three Final Four basketball competitions for the Tigers in 1981, 1986, and 2011, along with five SEC championships, and called games involving LSU standouts, and future professional basketball players, Shaquille O’Neal, Chris Jackson, Glen Davis, Stromile Swift, Brandon Brass, Rudy Macklin, and many others; and

WHEREAS, he was behind the microphone for the “Earthquake Game” in 1988, LSU’s 28-21 upset of No. 1 Florida in 1997, the “Bluegrass Miracle” in 2002, and the “Game of the Century” in 2011 when the top-ranked Tigers kicked a field goal in overtime to beat the University of Alabama Crimson Tide by a score of 9-6 in Tuscaloosa; and

WHEREAS, in addition to his role at LSU, Jim has held play-by-play jobs at Northwestern State University and Centenary College, as well as calling games for Texas League baseball and the World Football League where he worked alongside talk show legend Larry King; and

WHEREAS, the vice chancellor and director of athletics at LSU, Joe Alleva, said of Jim Hawthorne, “When you hear Jim’s voice, you immediately think LSU. That’s the mark of a great play-by-play man. His passion and enthusiasm for LSU translates into his broadcast and he has the innate ability to paint a picture about what’s happening on each play that makes the listener feel as if they are part of the action.”; and

WHEREAS, Jim was named the recipient of the 2015 Chris Schenkel Award, which is the most prestigious and highest honor in college sports broadcasting and is presented by the National Football Foundation & College Hall of Fame to a sports broadcaster who has had a long and distinguished career broadcasting college football; and

WHEREAS, in addition to his announcing skills, he is also an accomplished singer who was master of ceremonies and a singer on the “Louisiana Hayride” country and western music show on KWKH in Shreveport, and who occasionally performs at local venues; and

WHEREAS, Jim performed the national anthem in front of a packed Alex Box Stadium on Saturday, May 9, 2015, and received a rousing ovation from the crowd; and

WHEREAS, upon his retirement from LSU, Jim plans to spend more time with his son, Joseph William; his daughters, Jaime Lynn and Amanda Ruth; his two grandsons, two granddaughters, and great-granddaughter, and he is looking forward to traveling with his wife and best friend, Carol; and

WHEREAS, Jim Hawthorne merits a special measure of commendation for his outstanding accomplishments and his enduring legacy that will forever continue to be a source of tremendous pride for the innumerable players, coworkers, and fans whose lives he touched during his unforgettable career at Louisiana State University.

THEREFORE, BE IT RESOLVED that the Legislature of Louisiana hereby commends Jim Hawthorne upon his retirement from Louisiana State University as the legendary “Voice of the Tigers”, expresses to him sincere appreciation for the honor he has brought to the state of Louisiana, and extends to him best wishes for continued success in all of his future endeavors.

BE IT FURTHER RESOLVED that a copy of this Resolution be transmitted to Jim Hawthorne.

PRESIDENT OF THE SENATE
SPEAKER OF THE HOUSE OF REPRESENTATIVES