Men's Golf to Tee Off at NCAA Championships 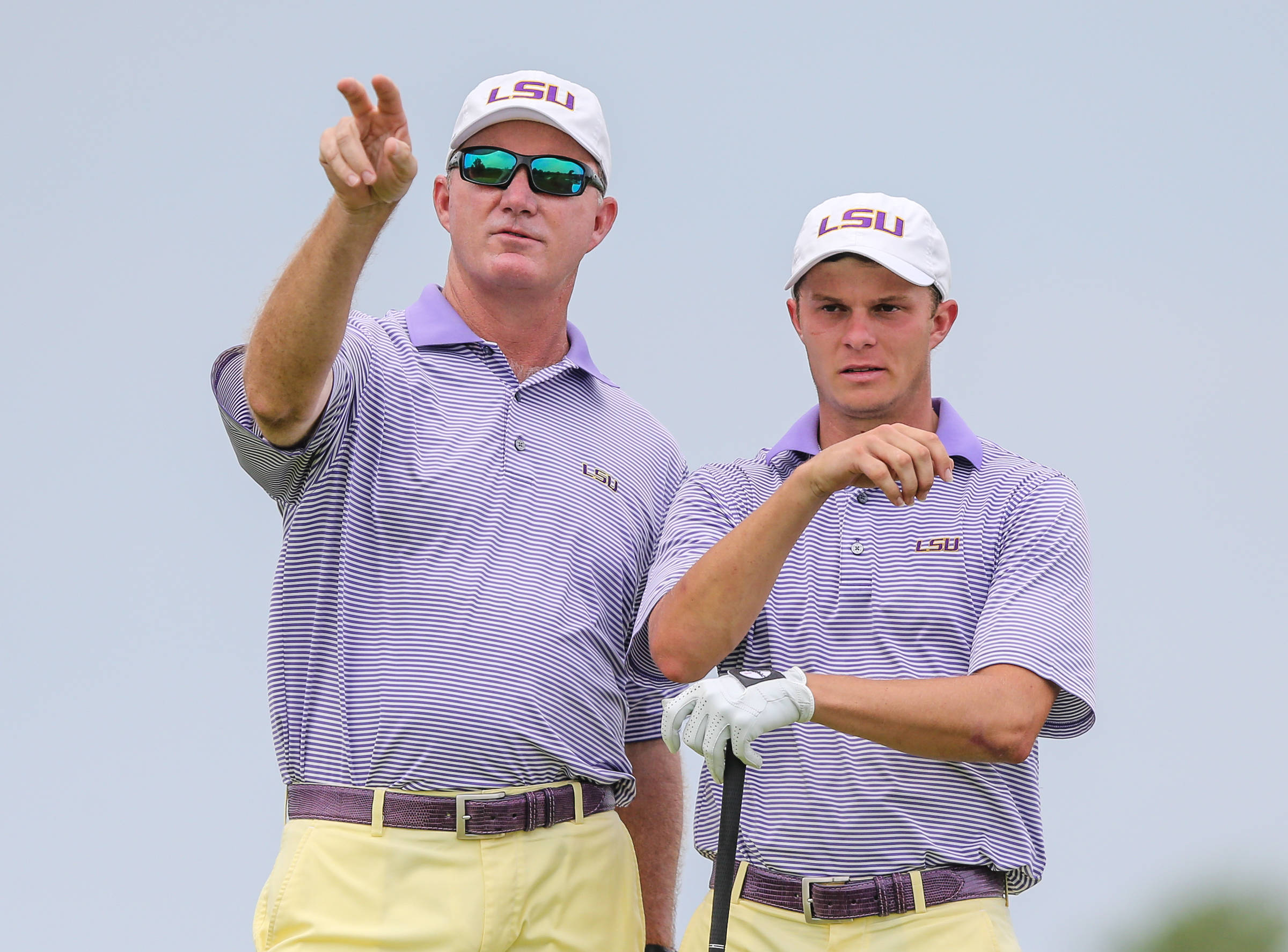 BATON ROUGE – Following a dramatic conclusion to the NCAA New Haven Regional two weeks ago, the No. 9-ranked LSU Tigers will tee off at the NCAA Division I Men’s Golf Championships for the 36th time in their history this weekend as the tournament will run through Wednesday’s national championship match at Concession Golf Club in Bradenton, Florida.

The Tigers will compete as the No. 7 seed in the field of 30 teams at the 2015 NCAA Division I Men’s Golf Championships after claiming a fifth-place finish at the NCAA New Haven Regional held May 14-16 at The Course at Yale. That’s where they earned qualification to the championship for the fifth time in six seasons with a 54-hole team score of 9-over par 849 for fifth place.

Thanks to a blistering 12-under par 268 in the final round, LSU overcame an 11-shot deficit to move from 10th place to fifth place and claim the final qualifying spot from the NCAA New Haven Regional.

They will now tee off in Friday’s first round at the NCAA Championships as the course will play to a par 72 and 7,483 yards for the tournament. The field of 30 teams will be cut to 15 following 54 holes of stroke play with those teams then looking to finish among the Top 8 advancing to the match-play tournament for the national championship after a fourth round of stroke play qualifying on Monday.

Teams advancing to match play will be re-seeded and paired based on their finish in stroke play with the leading team earning the No. 1 seed and taking on the eighth-place team playing as the No. 8 seed. The squad in second place will earn the No. 2 seed to take on the seventh-place team as the No. 7 seed, with the No. 3 seed facing the No. 6 seed and the No. 4 seed facing the No. 5 seed in the match play quarterfinals.

The quarterfinal and semifinal rounds of the single-elimination match-play tournament will be held on Tuesday followed by the national championship match on Wednesday of next week at Concession Golf Club.

Golf Channel will once again broadcast live coverage of the NCAA Division I Men’s Golf Championships beginning with the final round of stroke play on Monday from 3-6 p.m. CT. The network will also broadcast each of the three rounds of match play live, including Tuesday’s action with the quarterfinals from 9:30-11:30 a.m. CT and the semifinals from 2:30-6 p.m. CT. Wednesday’s national championship match will then be aired live at Concession Golf Club from 2-6 p.m. CT with pre-match and post-match coverage featured in each round.

It is the third-straight season and the fifth time in six years that the Tigers will compete at the NCAA Championships as they have certainly become tournament regulars under the direction of 10-year head coach Chuck Winstead. LSU has recently finished in 24th place in 2010, 21st place in 2011 and 23rd place in 2013 while competing for the national championship in the finale of the collegiate season.

They made history at Prairie Dunes Country Club in Hutchinson, Kansas, last spring by qualifying for the match play tournament for the national championship for the first time since the format was first introduced back in 2009. The Tigers earned the No. 3 seed in match play after tying for second place overall in stroke play with a final score of 4-under par 836.

LSU then defeated the No. 6-seeded UCLA Bruins by a 4-1 margin in the quarterfinals before falling to the No. 2-seeded and eventual national champion Alabama Crimson Tide by the same score in the semifinal round of match play. By officially tying for third place, the Tigers earned their best NCAA Championship finish in 47 years when they last took home a third-place national finish to finish off their 1966-67 season.

Teams finishing in the Top 5 of the final team standings in each of the six NCAA Regionals held two weeks ago have qualified for this year’s championship with the Tigers owning the No. 7 seed in the field.

The Florida State Seminoles have been rewarded with the No. 1 seed in the field thanks to a spring season in which they have been the nation’s No. 1-ranked team nearly throughout. Among the favorites to qualify to match play include No. 2 seed Texas, No. 3 seed Arizona State, No. 4 seed Illinois, No. 5 seed Vanderbilt, No. 6 seed South Carolina, No. 8 seed Oregon, No. 9 seed Texas Tech and No. 10 seed Georgia Tech.

After advancing to the NCAA Final Four a year ago, the Tigers have carried their momentum into the 2014-15 season while capturing four team titles in their 11 tournament appearances, including a three-shot victory at the SEC Championships to claim LSU’s first conference crown in 28 years since 1987 and their 16th SEC team championship in program history.

The Tigers have also taken home the team title at the Golfweek Conference Challenge (Sept. 14-16), David Toms Intercollegiate (Oct. 4-5) and Talis Park Challenge (March 15-16) during the 2014-15 season. It marks just the sixth time in program history and the first time since 2010-11 that the Tigers have won four tournaments in a single season.

The 2015 SEC Champions will compete with the same five-man lineup that has carried the team for much of the 2015 spring season, highlighted by a title-winning performance at the SEC Men’s Golf Championship from April 15-17 and a qualifying effort at the NCAA New Haven Regional from May 14-16 in recent weeks.

Winstead, the 2015 SEC Coach of the Year, has named a team that features senior All-American Ben Taylor, along with a quartet of Second-Team All-SEC selections for 2015 in senior Stewart Jolly, junior Zach Wright and sophomores Brandon Pierce and Eric Ricard as one of the most talented rosters teeing it up at the NCAA Division I Men’s Golf Championships this weekend.

Taylor is the top returning Tiger from the NCAA Championships a year ago as he tied for sixth place on the final stroke-play leaderboard with a score of 4-under par 206 at Prairie Dunes Country Club. Taylor is tied as the team’s second-leading scorer this season with a career-low 71.93 scoring average in 10 tournament starts to enter the weekend as the No. 96-ranked player in the country by Golfweek.

Three Tigers return to the lineup this season after leading the team into the NCAA Final Four a season ago after Jolly tied for 55th place and Wright tied for 105th place in stroke play at the 2014 NCAA Championship. Jolly is tied with Taylor as the team’s second-leading scorer with a 71.93 scoring average, while Wright follows with a career-low 72.03 scoring average as each has made 10 tournament starts in the 2014-15 season.

Pierce is the team’s leading scorer with a career-low 71.00 scoring average while starting all seven tournaments for the Tigers during the 2015 spring season. In those seven appearances, Pierce has ended up in the Top 20 individually on six occasions with three Top 10s. That includes a tie for ninth place individually at the SEC Championships while leading the Tigers to the team title.

Ricard is the only Tiger to appear in all 11 tournaments during the 2014-15 season, and like his teammates, has posted a career-best 72.00 scoring average to follow as LSU’s fourth-leading scorer in the lineup during this season. Ricard, who leads the Tigers with four top-10 finishes on the season, ranks No. 74 in Golfweek and No. 92 in Golfstat as one of the top players nationally heading into the championship.