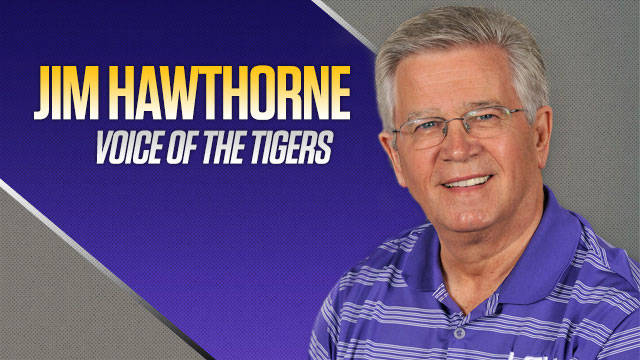 IRVING, Texas — The National Football Foundation (NFF) & College Hall of Fame announced today that LSU play-by-play announcer Jim Hawthorne will be the 2015 recipient of the NFF Chris Schenkel Award. Presented annually since 1996, the award recognizes individuals who have had long, distinguished careers broadcasting college football with direct ties to a specific university.

“Jim Hawthorne has had an exceptional broadcasting career with the Tigers, spanning more than thirty years, and during that time, his voice has become synonymous with one of the greatest college football traditions in the country,” said NFF President & CEO Steve Hatchell. “We are pleased to honor Jim Hawthorne with the 2015 NFF Chris Schenkel Award as he finishes his remarkable career this fall.”

Hawthorne begins his 33rd and final season as the play-by-play voice of LSU football this fall (1983-2015). Hawthorne began calling play-by-play for the Tigers in 1983. Hawthorne also plays host to weekly, one-hour live call-in shows with the football and baseball head coaches, as well as serving as the host for “Inside LSU Baseball.”

An Anacoco, La., native, Hawthorne took his first job in 1961 at Leesville High School, where he called play-by-play for the Wampus Cats football team. His broadcasting run continued as a DJ and commercial radio broadcaster for KNOC in Natchitoches while he attended school at Northwestern State before moving on to Shreveport’s KWKH.

His sports announcing career received a big boost when he began broadcasting games for the Shreveport Steamer, a World Football League squad that had moved from Houston to north Louisiana. The opportunity led to a 10-year stint broadcasting Centenary College (La.) sports, which in turn lead to an opening to call games for the LSU men’s basketball team in 1979-80. He added LSU football games in 1983 and Tiger baseball games the following year.

Hawthorne will accept the Schenkel Award Dec. 8 at the 58th NFF Annual Awards Dinner alongside the yet-to-be-announced recipients of the other NFF Major Awards, including the NFF Gold Medal, the NFF Distinguished American Award, The NFF Outstanding Contribution to Amateur Football Award, and the NFF John L. Toner Award for excellence in athletics administration. The event will take place at the historic Waldorf Astoria in New York City.

In addition to the presentation of the NFF Major Awards, the 58th NFF Annual Awards Dinner will provide the stage for the induction of the 2015 College Football Hall of Fame Class; the presentation of the 2015 NFF National Scholar-Athlete Awards, presented by Fidelity; and the bestowing of the 26th NFF William V. Campbell Trophy, presented by Fidelity Investments and displayed at its official home inside the New York Athletic Club, to the nation’s top scholar-athlete.

For ticket information regarding the 58th NFF Annual Awards Dinner, please contact NFF Director of External Relations Will Rudd at 972.556.1000 or wrudd@footballfoundation.com.