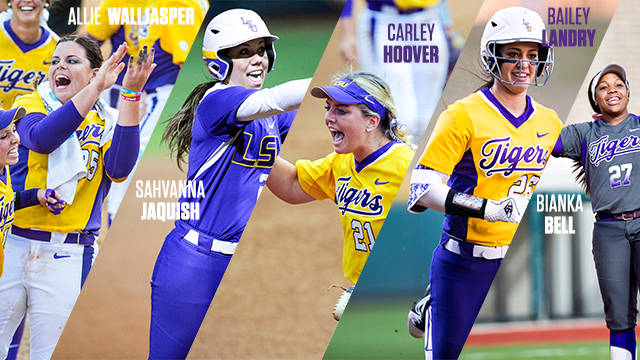 OKLAHOMA CITY, Okla. – On the eve of its Women’s College World Series opener, the LSU softball team learned on Wednesday afternoon that five of its players were named NFCA All-Americans in a press conference announcing the three teams, the most the program has had in a single season.

Tigers Bianka Bell, Carley Hoover, Sahvanna Jaquish, Bailey Landry and Allie Walljasper were bestowed with the honors on Wednesday, giving the 2015 squad one more honoree than the 2000 team that held the record with four selections. Bell, Hoover, Landry and Walljasper are earning NFCA All-America honors for the first time in their careers, while Jaquish becomes just the seventh player to earn multiple honors, the first since Rachele Fico to be an All-American in back-to-back years.

Among the three teams, LSU and Michigan, two of the eight teams that open play on Thursday, tied for the most selections in the country with five each, as a Tiger represented their position and were not at-large selections.

“Having an All-American in your program is a dream for any coach, but to have five named as some of the best players in the entire country is an unbelievable honor,” LSU head coach Beth Torina said. “Bianka, Bailey, Sahvanna, Carley and Allie have all had amazing seasons individually, while helping this team achieve new heights as a group together. From day one they’ve realized how important their teammates are to not only individual accolades, but group accomplishments as a whole, and they never lost sight of the team’s true goal and ‘Power of One” motto that has helped us get here to Oklahoma City and the Women’s College World Series.”

Bell caps her junior season where many thought she would eventually wind up, etching her spot as one of the best 18 players in the nation as a first team selection. The Tampa, Florida, native has produced one of the most prolific offensive seasons in team history as coming into the tournament she leads the team in doubles, runs, total bases, on-base percentage and slugging, tied for the team lead in home runs and second overall in total hits and RBIs.

One of the most feared hitters in all of the Southeastern Conference, second to Bell in intentional walks with two on the season, Jaquish can now be considered one of the top hitters throughout the nation after tying her own home run mark well before the end of the regular season with 17 as the first of two claiming second team honors. Her 73 RBIs and 21 multi-RBI games are both single-season records as well, accumulating 14 multi-hit games over the course of the season.

Although not a surprise after coming on strong toward the end of her freshman season, Landry has expounded on her stellar debut as a sophomore as she earns second team honors as an outfielder. Leading the team right now in both hits (84) and batting average (.431), the Louisiana native has been productive all year going on a program record-shattering 21-game hitting streak, while reaching base in 43 straight games. In the postseason alone she’s hit both of her home runs and turned two double plays in the field.

Tigers claimed two of the three pitching spots on the third team, as the duo that have garnered a combined 22 wins, 11 shutouts and five saves in freshmen hurlers Hoover and Walljasper.

A first team All-SEC performer, as well as being a top ten finalist for the NFCA Division I National Freshman of the Year award, Hoover has made the most of her return to the circle in 2015 as she’s amassed a 17-5 pitching record in 31 appearances and 19 starts for LSU, earning a 1.59 earned run average with a staff-leading 161 strikeouts. Her four saves this year is one away from tying the single-season record, as she’s entered games with runners on base 15 times in relief, allowing just one to score.

Winning her first nine decisions was just one of the ways that Walljasper burst on to the scene in her rookie campaign, going into the week at 15-5 with a 1.75 ERA. The Manteca, California, product led the pitching staff with 21 starts, where in 123.2 innings of work walked a miniscule 29 batters and allowed just 31 total earned runs. She finished the season with six seven-inning complete game wins, mixing in a pair of one-hitters and three consecutive shutout outings to open her career, with two of those coming in starts.