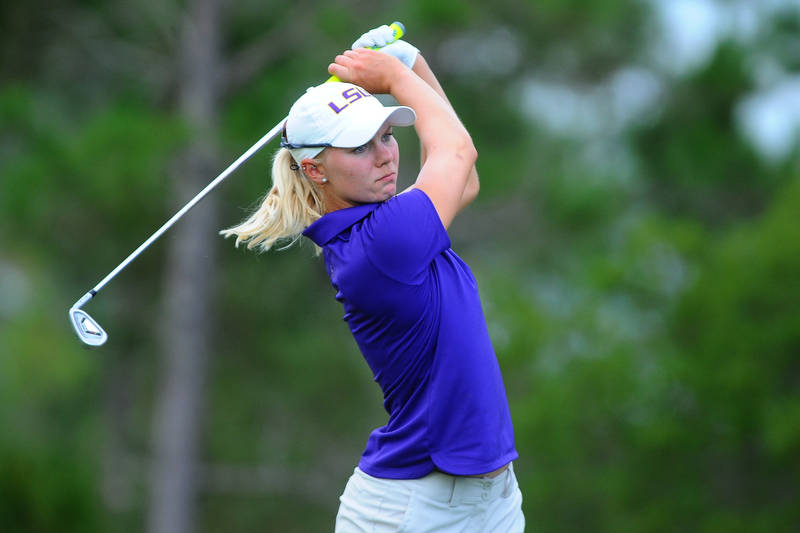 BATON ROUGE – The Women’s Golf Coaches Association announced its first-team All-America squad for 2015 and two members of LSU’s golf team, Madelene Sagstrom and Caroline Nistrup, are joined together for another honor.

The twosome becomes just the second duo to earn first-team A-A honors from the coaches association and that came as recently as 2011 when freshman Austin Ernst and senior Megan McChrystal were named for the same honor.

It has been that way all season for Sagstrom and Nistrup: one-two on the team in stroke average, co-winners of the Allstate Sugar Bowl in New Orleans, both first-team All-SEC and both first-team All-NCAA Region after going 1-2 in the Raleigh Region.

Senior Sagstrom of Sweden concluded her career on Sunday at the NCAA Championships by becoming the first LSU player in the 36-years history of the program to average under 72 strokes for a season of golf, finishing at 71.48 for her 33 rounds. The previous season best was set by Megan McChrystal in the 2010-11 season of 72.35. Sagstrom was the SEC Player of the Year and finalist for the national ANNIKA Foundation Award.

Nistrup, the sophomore from Denmark, completed her second season with a 12th place finish in the NCAA Championships out of a field of 132 golfers at 8-over par (72-74-76-74). She finished with a 72.41 stroke average which will be the third best stroke average for a season in program history and ironically she will go into her third season with the career stroke average at LSU at 72.94 for 63 rounds.

In all, there have now been eight golfers win First-Team All-American honors from the WGCA once in their careers.

The criteria used to determine the WGCA All-American teams include:

The complete WGCA All-America First Team (the second team and honorable mentions will be named after the conclusion of the NCAA title match Wednesday):