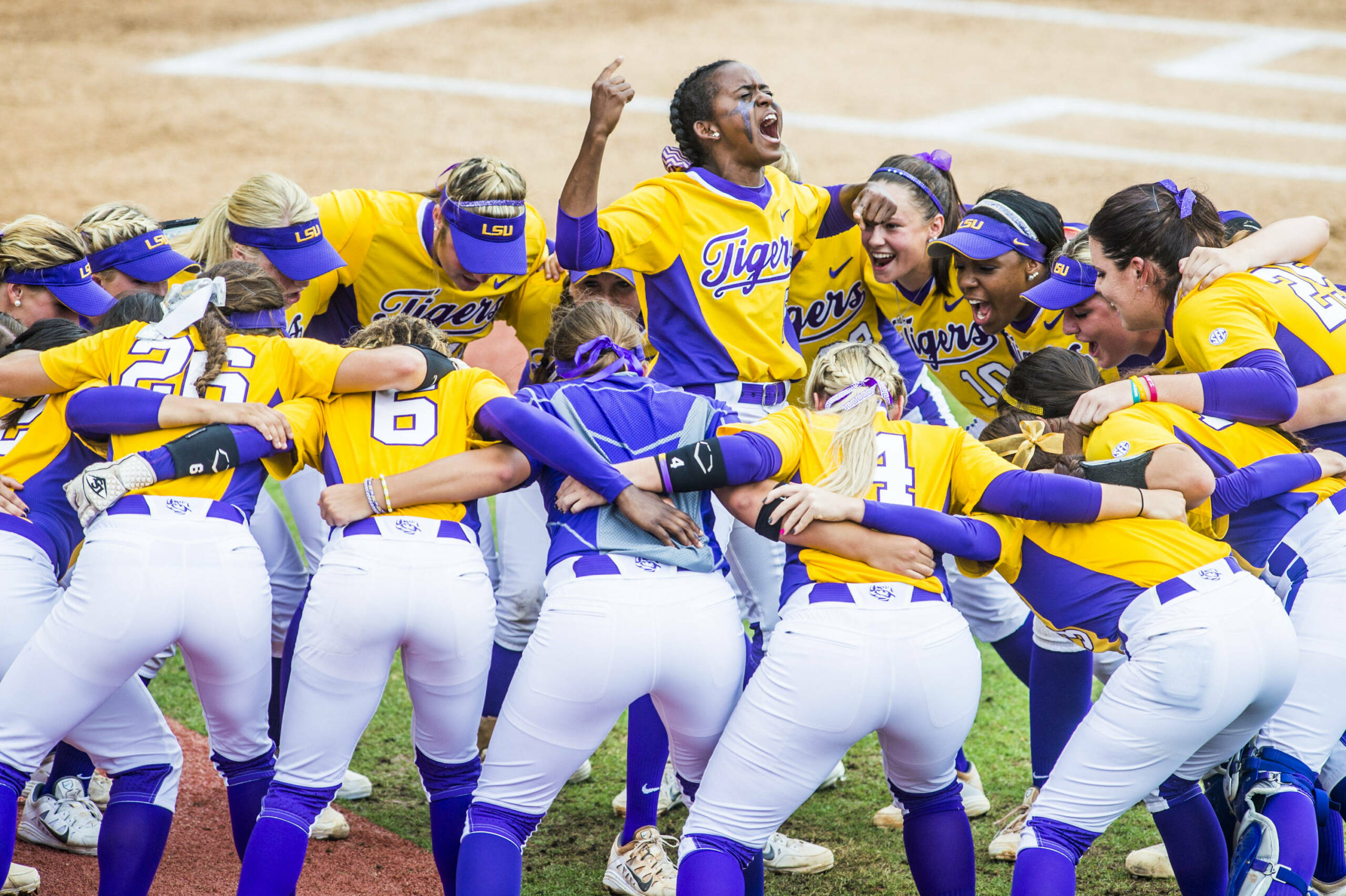 BATON ROUGE, La. – After a thrilling comeback that allowed the team to continue its record-breaking season, the No. 8 LSU softball team, seeded fifth overall, returns to Tiger Park for the final time in 2015 to host the No. 16 and 12th-seeded Arizona Wildcats in the 2015 Baton Rouge Super Regional beginning Saturday at 2 p.m. in Baton Rouge.

The best-of-three series will be played over two days beginning Saturday afternoon at Tiger Park, airing live on ESPNNews with Pam Ward and Cheri Kempf. Sunday’s action begins at 4 p.m. on ESPN, with the if-necessary game being played 45 minutes after the conclusion of the first game on ESPN2.

Individual general admission and standing-room-only/berm tickets remain for this weekend’s event, which can be purchased online at LSUTix.net or by calling (800) 960-8587, or in-person at the main LSU Ticket Office Thursday, at Tiger Park Friday from 10 a.m. to 2 p.m. or on game day.

Fans unable to watch or make it out this weekend can listen to all of the action courtesy of ESPN 104.5/104.9 in Baton Rouge or online in the Geaux Zone at LSUsports.net.

For the first time in the illustrious history of LSU softball, the Tigers will host a Super Regional with the team’s fourth-ever trip to the Women’s College World Series just two wins away. As one of the top eight national seeds to earn the right to host each of the first two rounds of postseason play, this record-breaking group of players will be able to add one more notch to the list when they step foot on the field for first pitch come Saturday.

“I think this whole season has been historic,” head coach Beth Torina said. “The first No. 1 ranking, you name it, a lot of the things they’ve done and the records they’ve set have led to this and I think it’s fitting that this group gets to host an event like this.”

This is the fourth time since the Super Regional format was adopted for softball in the mid-2000’s that LSU has made it this far, earning a spot among the remaining 16 teams in the nation for the first time since 2012. All three previous times leading up to now have been on the road, with that 2012 year coming at Missouri before advancing to Oklahoma City that next week.

Before getting to this point, the Tigers had to advance out of its own regional last week, enacting a little revenge along the way in going 4-1 with wins over Texas Southern, Nebraska and Arizona State twice, both of those wins coming on Sunday, to advance to this week and continue play. It was just the 19th time ever that a team has won both games on a regional final day to advance, as the last time that happened, the Sun Devils ousted LSU in 2009 in Tempe in that regional.

The Tigers had to stave off elimination three times, needing extra innings to do so in two of the three, defeating Nebraska 3-2 in 10 innings, before winning the finale against Arizona State 4-3 in nine. LSU had not played an extra-inning game at all before last weekend, although going past seven isn’t anything new for LSU in the postseason with 15 of their NCAA tournament games all-time going extras.

LSU bookended different types of euphoria from start-to-finish last weekend, exploding for 15 runs against Texas Southern, before the jubilation of a walk-off single to advance after fighting through various weather delays and late game starts throughout the tournament.

The battle-tested group saw that winning hit come from none other than Bianka Bell, whose game-winning single in the ninth pushed LSU over the top on her second hit of the day after going hitless in her previous three previous games before that. Although she only hit .222 with four of her five RBIs coming on Friday, the junior first team NFCA All-South Region selection came through big in a clutch situation, while also posting a solid fielding percentage in the infield.

The offensive output for the team came in spades from the top of the order in senior A.J. Andrews. Andrews hit .471 in the regional, earning eight hits and driving in two, while scoring five times with three stolen bases and receiving three walks for a .550 on-base percentage.

Sandra Simmons was next hitting .467, going 7-for-15 with a double, two RBIs and a run scored, while Bailey Landry also finished with seven hits and led the team in slugging at .813, with a double, triple and hitting her first home run of the year, driving in three and scoring three times with three walks and a sacrifice hit.

Although not seeing significant starts are batting opportunities until the end of the season, freshman Sydney Bourg has made the most of her recent time in the order, finishing last weekend with five hits for a .385 average, as she was also walked and hit by pitch twice to finish second to Andrews in on-base percentage at .529. Sahvanna Jaquish also had five hits, finishing second in RBIs and runs scored with four.

Earning MVP honors for the tournament was freshman pitcher Carley Hoover, amassing a 2-1 record in the circle after appearing in four of the five games on the weekend. She had an earned run average of 0.40 after allowing just one run with two complete games and a shutout, while also picking up her third save of the season in 17.1 innings of work.

Fellow freshman Allie Walljasper was also named to the All-Regional Team after earning two starts and earning one decision, striking out six and walking just three in 15.2 innings. Kelsee Selman helped keep that staff ERA under 1.00 after she set the tone with firing LSU’s 18th career postseason shutout, Hoover having the 19th, in the opener, as she struck out seven and scattered just three hits against TSU.

It’s fitting that the two teams meeting have been very familiar with each other, not just in the regular season but in the postseason as well in Arizona, as the Wildcats are the third-most played opponent in LSU’s postseason history leading into this year. Behind Arizona State and Louisiana-Lafayette, the Tigers have played no other team more than Arizona, including last year’s wild Tucson Regional.

Although it seemed as if LSU enacted its bit of revenge earlier this season at the Mary Nutter Collegiate Classic in a 4-3 win amid the desert mountains, the two sides will renew its rivalry with a little more at stake than the previous contest.

“I think it’s nice that we have some knowledge of them already, and we are familiar with them just based off last year’s regional and playing them this year,” Torina said. “They have a great offense, and they bring a ton of power. They’ve been swinging the bat well all season long and have one of the best offenses in the country.”

This is the second time the two teams have played each other in a Super Regional, with the last coming in 2006 in Tucson. The Wildcats took the first game 5-0 over the Tigers, but LSU responded by winning game two 3-2 to force the deciding game three. That third game ended the team’s season, falling 14-5 in five innings.

Last year, traveling to Tucson for the first time since that Super Regional, It was a little bit of déjà vu, as the two sides squared off on the final day with the chance to advance, as after falling to UA 9-8 just missing the comeback attempt, LSU won the first game that Sunday 5-1, before running out of gas in the final and falling 13-5 in five innings to end the season.

“I think the win against Arizona in Palm Springs was as much about pride it was about as anything else,” Torina said. “I think remembering what happened last year is going to be a factor in our favor this weekend too. Our team remembering that they ended our season last year, and I think that’s going to play into how they approach this weekend as a whole, and avoiding having what happened last year happening again.”