Women's Golf Preps to Tee Off at NCAA's 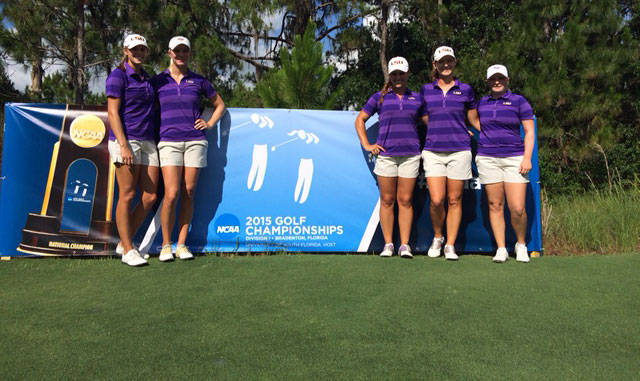 BRADENTON, FLA. – The sixth-ranked LSU women’s golf team toured “The Concession” golf course on Thursday, playing their one practice round prior to the start of the stroke play portion of the event which begins on Friday.

It is a new world for women’s golf this year as a winning team will have to play seven rounds over six days to win the national championship. The format is the same for the men’s golf championship which will also be played on the same course beginning two days after the conclusion of the women’s event next Wednesday.

LSU is one of 10 schools to have both their men’s and women’s teams both in the NCAA Championship.

The magic numbers for this year’s event are simple in a format that has some complications:

1 – The individual champion will be crowned in a final stroke play round on Monday after 72 holes.

8—in the same round, the field of 15 will become 8 that will advance for the first ever match play battle for the team national championship that begins on Tuesday.

For the first time in over a decade, the event will be televised on Monday, Tuesday and Wednesday by Golf Channel.

LSU is part of the top 12 seeds, based on Golfstat rankings, and will have the seemingly advantageous morning-afternoon start times on Friday and Saturday and in fact will tee off Friday morning at 7:30 a.m. ET with No. 4 Duke and No. 5 Arizona.

The top three seeds, Southern California, South Carolina and UCLA will follow the LSU wave off No. 1 with Washington, Arkansas, Texas A&M and Virginia, Wake Forest and Tennessee off No. 10 in the morning.

LSU began its day on the fourth hole in the shotgun start that put all 132 players on the course at the same time. The seventh showed its teeth with a back green pin placement and just past that a drop that sent the ball rolling into a deep valley.

The greens are full of interesting slopes and are shaved tightly on the collars allowing for runoffs that will provide significant chipping and/or putting opportunities up hills. Also the sand traps are of irregular size and shape and some run right into the hard packed sand cart paths.

Bahnsen feels the redo of The University Club a few years ago will help her Lady Tigers get through some of the course issues.

“As far as our girls, you saw the greens have a lot going on. When we redesigned the University Club, we had in mind preparing our teams for championship courses. That change we made to the University Club will help us I believe.”

The latest forecast calls for a high of 91 with a 20 percent chance of rain on Friday.

While there is no television in the early rounds, live scoring will be available at golfstatresults.com and ncaa.com with updates beginning shortly after 7:30 a.m. ET on the LSU round at www.Facebook.com/LSUwomensgolf and on Twitter @LSUWomensgolf.

The course was designed by golf legends Tony Jacklin and Jack Nicklaus and is named “The Concession” based on the premise of a legendary act of sportsmanship at the 1969 Ryder Cup, when Nicklaus conceded a 2-foot putt that Jacklin needed on the final hole for the British team to tie the Americans. Nicklaus’ concession still enabled the U.S. to retain the cup, having won it in 1967, but his sportsmanship resonated with fans.

This marks the 13th time overall that LSU has made an NCAA Championships appearance since the NCAA took over the team championship in 1982 … LSU’s last two appearances were in 2011 and 2012, finishing third each year with freshman Austin Ernst winning the individual title in 2011.

LSU is one of six teams from the Southeastern Conference to make the final 24, tying the Pac 12 for most qualifying teams.

Duke is the defending champion, winning last year in Tulsa by two shots over Southern California. Duke’s six total championships is one shy of the best total of seven by Arizona State, which did not make this year’s final 24.

While walking down a cart path, Sagstrom called the course “tough, but it’s going to be a lot of fun.”