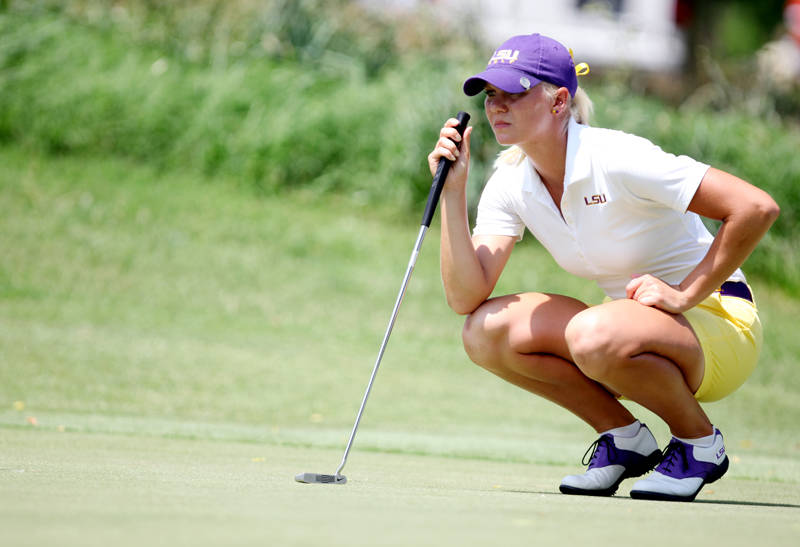 BRADENTON, Fla. – When the nation’s No. 2 golfer Madelene Sagstrom of LSU tees off a little after 8 a.m. ET Friday in the first round of the NCAA Women’s Golf Championships, she will be the one Lady Tiger with the knowledge of what is about to happen.

She can also relate to the rest of her teammates what lies ahead as she was a freshman on the 2012 Lady Tiger team that finished third in the NCAA Championships, just two shy of winner Alabama.

Sagstrom, on the watch list for the two major Player of the Year awards from the ANNIKA Foundation and the Women’s Golf Coaches Association, will lead the sixth-ranked Lady Tigers on a possible quest for a title that could take them through seven rounds in six days including three in match play.

In 2012, Sagstrom proved to be vital for LSU’s finish as the freshman had her score counted three times (70 in the first round, 72 in the second round, 74 in the pivotal final round) in the play five, count four 72-hole format of women’s stroke play competition.

“My freshman year I was not nervous going into the tournament because I had no idea what it meant,” said Sagstrom when she remembered back to 2012. “I knew it was the biggest tournament in college but I did not know what to expect. Once I was there I was super excited and really enjoyed it. I felt more pressure and I was more nervous when I got there. This year it is different because I do not feel any pressure. I am just going to go out there and have fun.”

That has been one of the mantras of this LSU team, recognized by the NCAA on Wednesday for academic success, which has posted three wins and posted one of the better years in the 36-year history of the program. Sagstrom and her teammates enjoy each other’s company on and off the course and Karen Bahnsen’s belief of one shot at a time, one hole at a time, don’t worry about what others are doing, don’t let a bad shot or bad hole linger along and ruin the round has worked well for this group of Lady Tigers.

Three team rounds to determine the top 15 teams and nine individuals who will play a fourth round to give a 72-hole individual champion and then eight teams to a women’s first-ever match play for the title. The stroke play goes from Friday through Monday. Then Tuesday two rounds of match play to get to a championship final in one week on Wednesday. The last three days, for the first time in a decade, will be played under the watchful eye of Golf Channel.

Lots of golf. Lots of decisions. Lots of fun? In many way, yes.

But in some respects at least for a few days it’s just another tournament.

“What I would say to my teammates going there for the first time is that yes it is a big deal, we can’t hide the fact it is the biggest tournament of the year,” she said. “Once we are on the course, though, we are not going to do anything differently. We are just going to play our play and then whatever happens happens.”

In many ways, it is what propelled the Lady Tigers to third place finishes in both 2011 and 2012, the last two times they made it to the big event.

Sagstrom has been on her game almost the entire year in earning Player of the Year and earning not only second in the nation but third in the world amateur rankings. It was a plan that was in place from when she came back to Sweden from America after the end of the 2013-14 season.

“When I was home I made sure that I got some time off and spent a lot of time with my parents,” the 22-year-old who is scheduled to graduate in December, said. “Other than that I prepared by seeing my coaches at home a lot. I worked hard on what I needed to work on and that paid off.”

One thing noticeable last summer was all five of the players on this championship lineup (Sagstrom, Caroline Nistrup, Elise Bradley, Carly Ray Goldstein, Nadine Dreher) had great summers of golf. Probably the most impressive summer of record since 2001 when Meredith Duncan won three major women’s amateur events including the U.S. Women’s. That work and competition did include some match play just to put that out on the table.

We mentioned Bahnsen’s plan of attack, well Sagstrom has had one of her own for a while and it has led her to this point.

That process will end up with her on the verge of school single season (70.90) and career stroke average records (72.84). She will be the first golfer to average under 72 for a season in the 36 years of the program. That process has earned her national respect and recognition and we as fans will have the opportunity to watch the top two players in the nation tee it up together in the opening two rounds of this event.

As a side note, whatever she posts, Nistrup after two years will be right on her heels with a 72.86 average for 59 rounds going into the championships.

There’s a pro tour down the road waiting for her after she gets her degree. But first there is this little old NCAA Championship to be contested.

The Lady Tigers landed at the Sarasota-Bradenton airport close to 2:30 p.m. ET Wednesday afternoon and will get their first look at The Concession Golf Club Thursday morning after 7 a.m. when participants are allowed on the property. A shotgun start for the teams at 9 a.m. is set as this year the team’s will have just one practice round before play begins on Friday.

I am pleased to be on site for this year’s event and we will tomorrow tell the story of The Concession Club and its two designers place in Ryder Cup history along with previewing the opening round of the event. Live updates will begin early Friday morning from the tournament on both Facebook (www.Facebook.com/LSUwomensgolf) and Twitter @LSUwomensgolf and complete recaps every night throughout the LSU run in the event at LSUsports.net.