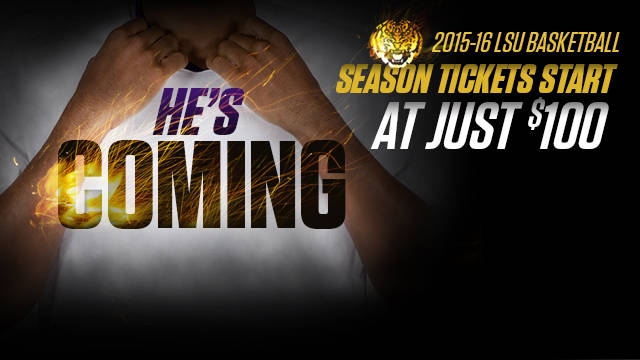 This year’s campaign will focus on the arrival of the nation’s No. 1 recruit, Ben Simmons, and his chosen jersey number “25.”

The campaign will be featured throughout the Baton Rouge community via print, billboard, online and social media advertising.

LSU is coming off a 22-win season, a tie for third in the SEC with 11 victories and its first appearance in the NCAA Tournament since 2009.

Coach Johnny Jones and the Tiger coaching staff has signed in some recruiting circles the nation’s top recruiting class with Simmons, No. 14 Antonio Blakeney and Louisiana Mr. Basketball Brandon Sampson of Madison Prep in Baton Rouge. Simmons, from Australia, has led Montverde (Florida) Academy to three straight National High School championships, while Blakeney hails from Oak Ridge HS in Orlando. Sampson led Madison Prep to the state title in Class 1A in 2015 after winning the Class B title in 2013 with former Tiger Jarell Martin.

Jones, who has won the most games of any LSU coach in their first three years in Baton Rouge (61), returns players who had big impact on the 2015 season including seniors Keith Hornsby and Josh Gray, junior Tim Quarterman and freshman Jalyn Patterson. Also in the mix, is New Orleans native and Arizona transfer Craig Victor, who joined the team in mid-season.

The campaign began on www.LSUtix.net on Wednesday. For further information, contact the LSU Athletics Ticket Office at (225) 578-2184.