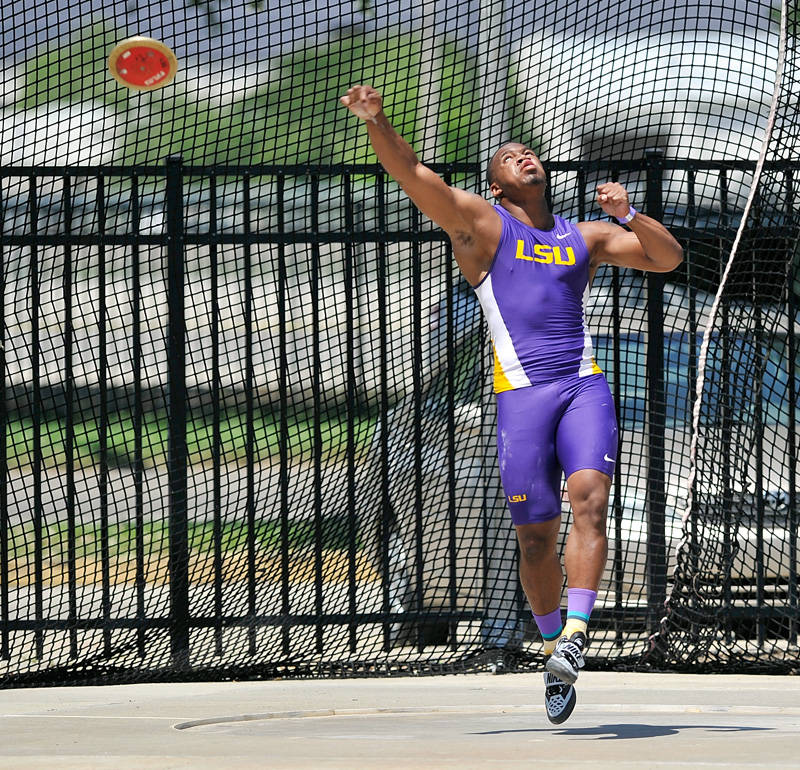 BATON ROUGE – Not only were the LSU Track & Field teams among the top performers on the track at the SEC Outdoor Championships in Starkville this past weekend, but 10 Tigers and Lady Tigers emerged from the weekend as college graduates after receiving their degrees during Friday’s commencement exercises across the LSU campus.

Rodney Brown and Julian Parker were among LSU’s graduates competing at Mississippi State’s Mike Sanders Track Complex over the weekend, and each was crowned an SEC Champion in Saturday’s finale to guide the Tigers and Lady Tigers to a sweep of fourth-place team finishes at this year’s SEC Championships.

Brown, who earned his degree in sport administration, was crowned the SEC Champion in the men’s discus throw for the second time in his collegiate career with a dominant performance on Saturday.

Brown opened with a throw of 200-11 on his very first attempt to take a lead he would not relinquish over the rest of the competition. Alabama’s reigning NCAA Champion Hayden Reed closed the gap with his best for the day at 198-4 in the third round, but Brown put the title out of reach for his competitors as he improved to 203-11 in the fourth round and 208-4 in the final round to regain the SEC crown he last won as a sophomore in 2013. He became the fifth LSU Tiger all-time to be crowned the SEC’s discus champion twice in a collegiate career.

A native of Chappell Hill, Texas, Brown remains the NCAA’s leading discus thrower for the 2015 season with a school-record mark of 213-5 set in defending his Penn Relays title back on April 25. After winning his second SEC title on Saturday, Brown is now a perfect 8-for-8 on the year while winning all eight discus competitions in which he has entered during his senior season this spring.

Parker set the track alight with an improbably victory in the men’s 800-meter final for yet another SEC-title-winning performance on the final day of this year’s SEC Outdoor Championships on Saturday evening.

The senior from Baton Rouge turned in the fastest 800-meter race of his life in the SEC final, crossing the finish line first in 1 minute, 46.17 seconds to claim the SEC Outdoor title for himself while posting 10 big points on the scoreboard for his team. He was crowned the SEC’s 800-meter champion while lining up in his first career final at the conference meet.

After lining up with a previous personal best of 1:47.33 set earlier this season, Parker dropped his top time by more than one full second as his winning 1:46.17 moved him into a tie for the No. 6 spot nationally for 2015. Parker also vaulted six spots up the school’s all-time performance list as the No. 3-ranked 800-meter runner in school history. He became the first LSU Tiger to be crowned the SEC Outdoor Champion in the event since former All-American Richard Jones in 2010 and is LSU’s fifth winner of the event all-time.

Quincy Downing also earned All-SEC honors in Saturday’s finals after being recognized as a college graduate during Friday’s commencement while earning his LSU degree in sport administration.

Not only did Downing race to a personal best of 49.63 seconds in a career-best fourth-place finish in the men’s 400-meter hurdles final at the SEC Championships, but he also led off the Tigers to a silver-medal-winning second-place finish in the men’s 4×400-meter relay in Saturday’s finale. He helped lead the Tigers to a seasonal-best time of 3:01.63 in the relay to score the SEC silver medal.

Other graduates running for the Tigers and Lady Tigers at the SEC Outdoor Track & Field Championships this past weekend were Travis Pope (history), who was the eighth-place finisher in the men’s 10,000 meters final on Thursday night, as well as Andria Aguilar (international studies), Philip Dempsey (interdisciplinary studies), Chaiss Matthews (biology) and Philip Primeaux (mechanical engineering).

Those taking part in Friday’s commencement exercises at the Pete Maravich Assembly Center on campus were distance runners Meghan Charbonnet and Bryan Mutell. Charbonnet took part in the ceremony with the College of Human & Social Sciences while receiving her degree in psychology, and Mutell participated in graduation exercises with the E.J. Ourso College of Business while getting his degree in economics.