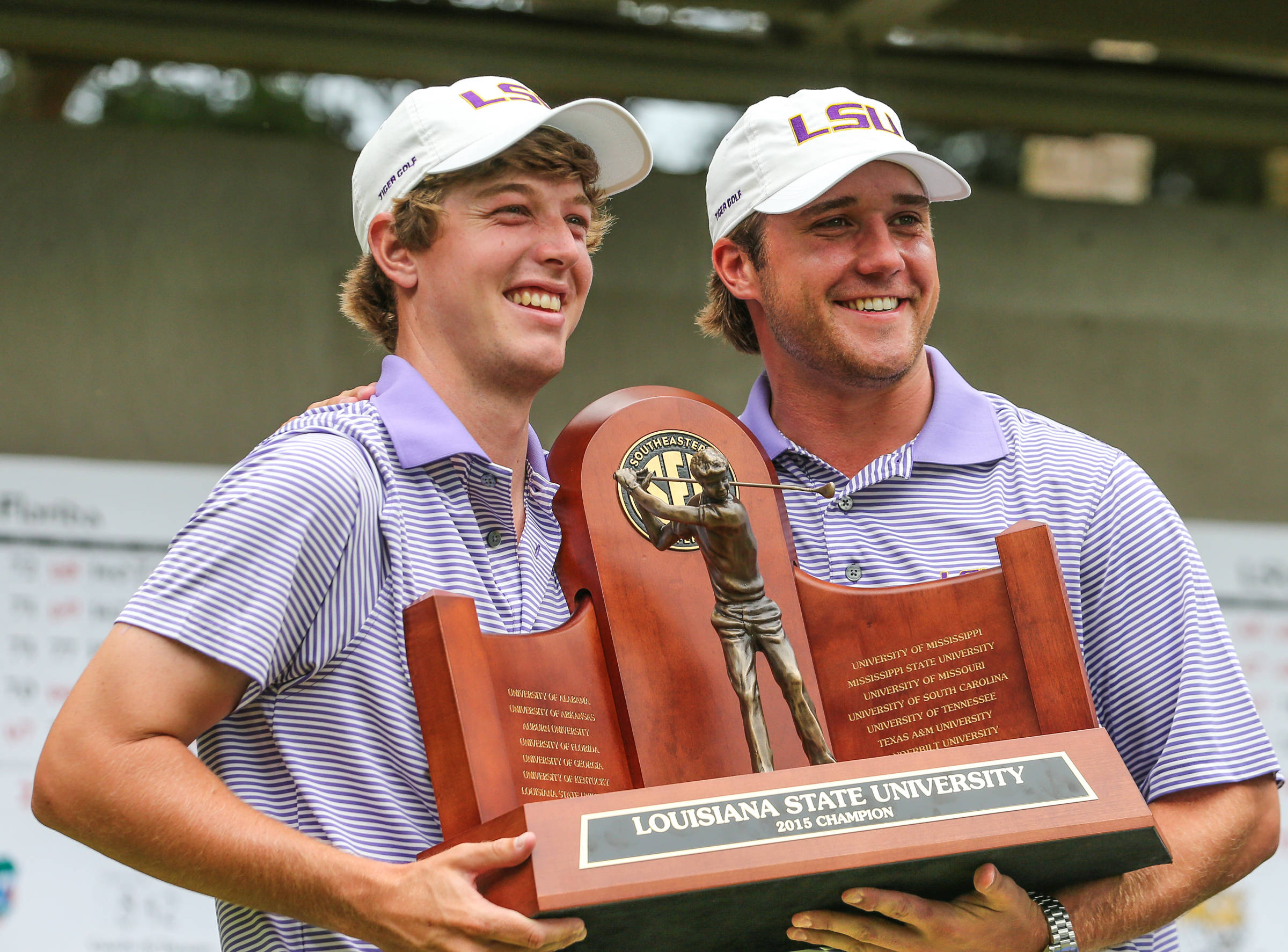 BATON ROUGE – While leading the LSU Tigers back into the NCAA Division I Men’s Golf Championships with a qualifying performance at the NCAA New Haven Regional last weekend, senior All-Americans Stewart Jolly and Ben Taylor were also recognized as college graduates during Friday’s commencement exercises across the LSU campus.

They were absent from their respective graduation exercises on campus on Friday while helping the Tigers qualify from the NCAA New Haven (Conn.) Regional at The Course at Yale this past weekend.

Jolly and Taylor are among four members of the LSU Men’s Golf team to receive their degrees following the 2015 spring semester as they are joined in graduation by fellow senior Myles Lewis and former LSU standout Austin Gutgsell, cementing the program’s outstanding performance on the course and in the classroom.

Jolly received his degree in general business and Taylor received his degree in sport administration on the same weekend in which they helped lead the Tigers into the NCAA Championships for the fifth time in the last six seasons. LSU earned a fifth-place team finish at the NCAA New Haven Regional with a final tournament score of 9-over par 849, including a 12-under par 268 in Saturday’s final round to storm back from 10th place for the start of the day to claim a Top 5 qualifying spot after 54 holes of regional play.

They were also instrumental in guiding the Tigers to the team’s first SEC Championship in 28 years with a three-stroke win at the 2015 SEC Men’s Golf Championships held on April 17-19 at Sea Island Golf Club’s Seaside Course in St. Simons Island, Georgia. Jolly even earned his best career SEC finish with a tie for fourth place overall to solidify his Second-Team All-SEC status this season.

Their success in 2014-15 comes just one season after leading the Tigers to the NCAA Final Four of match play at the NCAA Championships last spring. It was a junior season in which Jolly secured a First-Team All-SEC and Third-Team All-America honor from both PING and Golfweek and Taylor joined his teammate in achieving All-America status as a Golfweek Honorable Mention All-American in 2014.

Lewis has also enjoyed a distinguished collegiate career with the Tigers, highlighted by winning the individual title at the 2014 Louisiana Classics in Lafayette last spring. His senior season has been highlighted by tying for fourth place on the leaderboard in LSU’s spring season opener at The Prestige at PGA West back in February. Lewis walked across the stage at the Pete Maravich Assembly Center on Friday to pick up his marketing degree as part of commencement exercises with the E.J. Ourso College of Business.

Gutgsell, who previously graduated in four years in May 2012 with his undergraduate degree in marketing, joined Lewis as part of the ceremony with the E.J. Ourso College of Business on Friday afternoon as he picked up his Master of Business Administration. And Gutgsell didn’t just graduate with his MBA, but he did so while ranking No. 1 among all of LSU’s MBA graduates this spring.

Gutgsell wrapped up his collegiate career with the Tigers in the 2011-12 season as a three-time SEC Academic Honor Roll selection in the classroom and champion golfer on the course in the purple and gold.

Making 34 tournament appearances with the Tigers over four seasons, Gutgsell ended his playing career with a 74.40 scoring average while earning five top-10 finishes and eight top-20 finishes as an LSU Tiger. Gutgsell won two tournament titles in college golf as champion of the 2010 David Toms Intercollegiate and 2012 LSU National Invitational.