Lowe: Softball Gets to 'Play On' 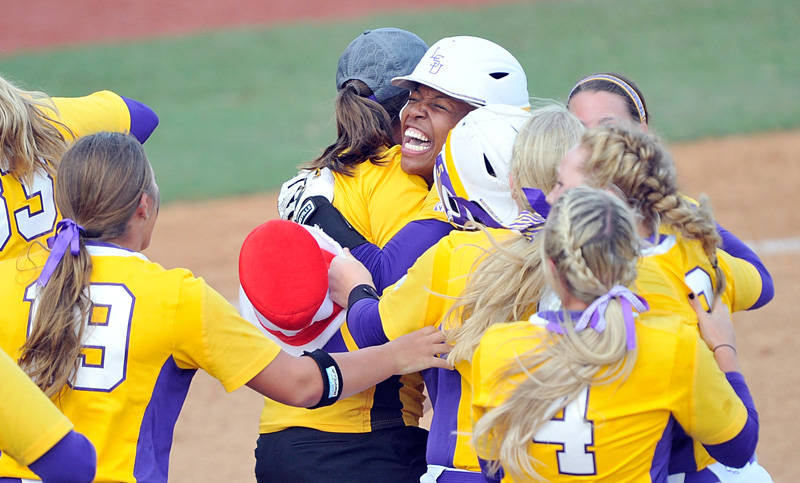 Well, the missing atmosphere at Tiger Park is still around after all.

Thank to one of the most epic NCAA Regional Championship Sundays in softball in Baton Rouge since 2000 in the old Tiger Park, the LSU softball team will play on next weekend in the NCAA Super Regional with two wins standing between LSU and a return to the Women’s College World Series.

After a Saturday when the atmosphere was subdued at best for most of two games and the park seemed relatively empty after various delays because of rain and lightning made figuring out when the games would be played difficult at best, the LSU players had to create their own excitement and found a way to get past Nebraska in extra innings.

Two wins over a very capable Arizona State, a team that handled them 1-0 appeared to be doable but extremely difficult.

But there was something different when I arrived at the park. Tiger players were buzzing all over the stadium it seemed. There was jumping and shouting on the field and the stands at Tiger Park were filling up as well. Not only were they filling, but fans were loud and there was a buzz that sounded very familiar.

I knew the sound. It was the sound I remembered in the years since the park was built. Tiger Park was alive and raucous. It was just what this Tiger team needed.

But the Tigers needed to raise the decibel level early to keep the fans feeling there was a good chance of two wins alive. A.J. Andrews singled to open the first game and then Bailey Landry bunted for a hit. To me, this may have been the most important part of the game. If LSU doesn’t score, the crowd would have had second thoughts and maybe the atmosphere would have been lost.

As Coach Beth Torina said after the game: “I feel like a sleeping giant has been awakened.”

You knew it was a big day when the celebrity count was taken. Too many to name all, but Yvette Girouard was there and just for good measure put one of her lucky visors on the ledge of the LSU Sports Radio Network booth. Skip Bertman and his wife Sandy were in the house as were several members of the LSU coaching fraternity and Joe Alleva watching from a perch under the scoreboard. Man, even LSU Sports Network baseball analyst Charles Hanagriff was in the house.

But one game was something. Could they muster up the drive to do it again? Breanna Macha was going to be in the circle for ASU again. LSU though got the fans fired up early with two in the first but this game would have plenty of twists and turns that had the fans holding their breathe on every pitch entering the seventh inning.

It was very much like a six-team regional in 2000 at the old Tiger Park that featured Southern Miss and a pitcher named Courtney Blades. Glenn Moore had pitchers named Britni Sneed and Ashley Lewis and by Saturday night of that event, LSU with a loss was facing Southern Miss late into the night and into the early morning. LSU got out of there with a 1-0 win in 13 innings putting three teams with one loss into Sunday.

Southern Miss won an early game to meet LSU for all the marbles and Sneed and Blades went at each other in a game that packed the old erector-set of a ball park and amazingly a group of college students that found themselves up on the roof of a now torn down apartment complex over the left field fence. As Patrick Wright and I soon found out, they also had a radio listening to our broadcast and waving frantically every time we mentioned them.

Neither team could penetrate the pitching and every little threat was received with a crescendo of noise from the Tiger faithful. In the ninth, Southern Miss put together a threat and Coach Moore elected to load the bases in hopes of getting a force out to get out of the jam. But it didn’t go LSU’s way and USM won, 1-0, leaving both teams and the crowd literally spent.

That same tense atmosphere permeated the new park when Arizona State took a 3-2 lead in the seventh on an unearned run. Were we going to go all this way and come up just short again?

Nope. Tiger Park exploded when Landry doubled to drive home the tying run in the bottom of the seventh and then the place just came unglued when Bianka Bell gave the Tigers the walk-off win.

It’s true in baseball and it’s true in softball. The loud, nutty LSU crowd can drive these teams and it happened again on Sunday. Tiger Park on Sunday like it was on Saturday would have been a disservice to the coaching staff and players who have worked so hard. Now it’s time to do it again. The first Super Regional in Tiger Park. Gee, that sounds so good to write.

“Ultimately, I’m so proud of the team. I’m proud of their fight,” said Torina, who every game and every day with her staff has shown their knowledge and ability to coach this game. “Hopefully, we can continue to roll this into the next weekend, and hopefully this is just the beginning of a great postseason run.”

Play on ladies, play on.

Frankly the softball wins Sunday were just the concluding salvo of a nice weekend for LSU. First of all, are you kidding me? That final round by the LSU men’s golf team in the NCAA Regional in New Haven was sick. Four counting scores of 12-under par? Our headline on the web site said it was “stunning.” I would call it “shocking.” Not improbable, but coming from 11 strokes down when most teams are shooting under par is nuts.

Chuck Winstead’s guys are going to nationals getting the final qualifying spot from there concluding a final hour of ebbs and flows. LSU is one of 10 schools that will send both their men’s and women’s golf teams to Bradenton, Florida, starting this week when the No. 6 women’s team will take their shots. Both tournaments are on Golf Channel and if things go right, there could be some good things ahead for them.

Then there is baseball. Didn’t some media types things LSU wouldn’t win a league championship anywhere? I thought I heard that somewhere, I think. Maybe I was dreaming. But the Tigers wrapped things up in fine fashion to take the West and the SEC titles and now it’s on to LSU’s favorite place, Hoover, Alabama for the league tournament. The Tiger baseballers love that place and the pitching alignment should be ready to go starting Wednesday. Then, get ready Alex Box, we are coming home for regional play.

Finally, the track teams had some great individual performances this past weekend in taking fourth place in the league championships. That league meet is a little strange because it seems like quantity rather than quality is necessary to win the SECs, while quality seems more important in the NCAAs.

For track and field, it’s on to the early rounds of the NCAAs and then the championship rounds with the new made for TV format of all men’s finals on one day and all women’s finals the next. Should make for a lot of exciting action.

And that’s what Sunday was all about. Exciting action. Exciting play and for LSU a very good time indeed. Now don’t go anywhere and hide Tiger Park atmosphere. We’ll be looking for you next weekend.