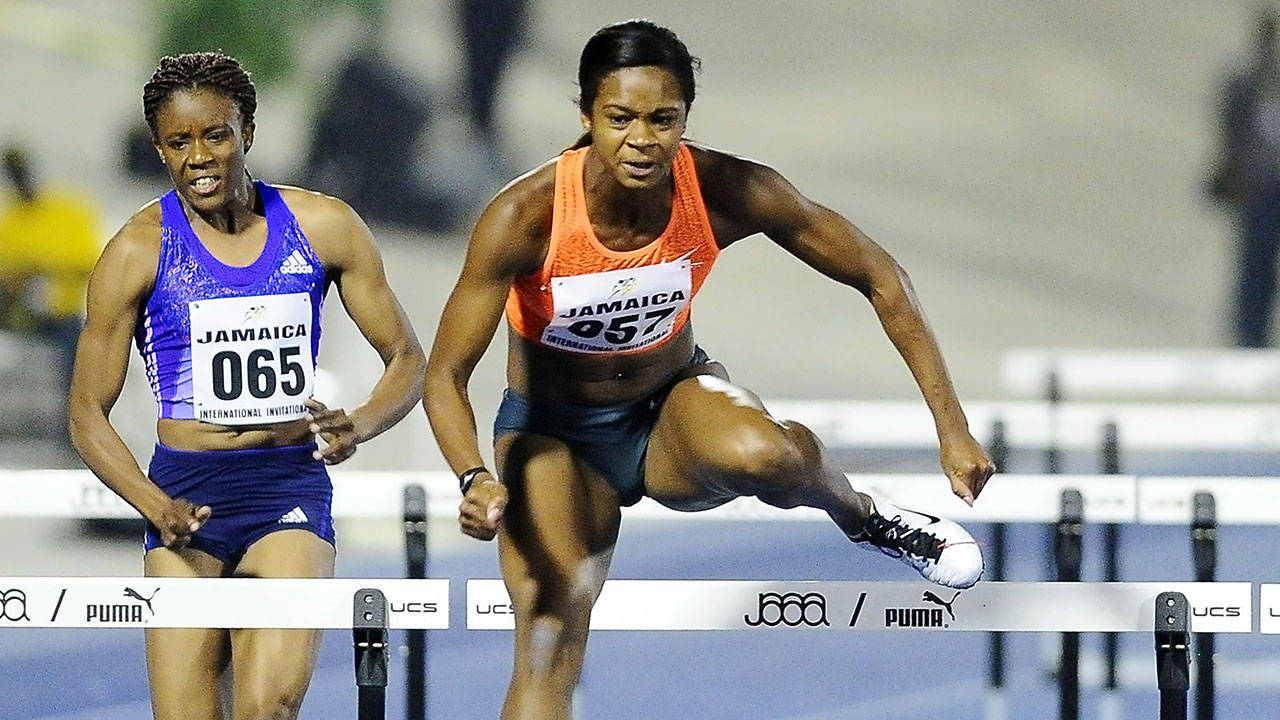 BATON ROUGE – Lady Tiger alum Jasmin Stowers continues to set the track alight in her rookie season as one of the world’s emerging hurdle stars as she dropped her own world-leading time for 2015 with a new IAAF Diamond League record of 12.35 seconds in blitzing the field at the IAAF Diamond League meeting at the Qatar Sports Club in Doha on Friday night.

Stowers announced herself as one of the world’s top young talents in the 100-meter hurdles in recent weeks while posting back-to-back world-leading times of 12.40 at the 106th Drake Relays and 12.39 at the Jamaican Invitational in a pair of meet-record performances while becoming one of the world’s 10 fastest sprint hurdlers in history.

She added another chapter to her 2015 season on Friday when she ran a world-leading time for the third-straight race with a winning run of 12.35 in her first ever IAAF Diamond League appearance.

Taking charge midway through the race, Stowers powered through the finish line nearly two tenths of a second ahead of the field as her former collegiate rival Sharika Nelvis, formerly of Arkansas State, took second in the event with a personal best of her own at 12.54 for the second-fastest time in the world in 2015.

Now in the sixth season of the IAAF Diamond League circuit, Stowers is the fastest hurdler to ever run the 100-meter hurdles at any Diamond League meet. Her winning time of 12.35 on Friday smashed the 3-year-old IAAF Diamond League record of 12.40 set by Australian starlet Sally Pearson in Paris in 2012, just one month before winning Olympic gold as the 100-meter hurdles champion at the 2012 London Games. It also set a new meet record in Doha while eclipsing the previous time of 12.52 run by Canadian Priscilla Schliep six years ago in 2009.

Great Britain’s Tiffany Porter followed Stowers (12.35) and Nelvis (12.54) in third place with a time of 12.65, while Pearson trailed in fourth place across the finish line with her time of 12.69. Pearson, who owns a season best of 12.59 for 2015, is not only the reigning Olympic Champion in the event, but she is also a former World Champion in 2011 and Olympic Silver Medalist in 2008.

Rounding out the field in the women’s 100-meter hurdles in Friday’s IAAF Diamond League meeting in Doha were Americans Queen Harrison (12.72) in fifth, Kristi Castlin (12.80) in sixth, Tenaya Jones (12.86) in seventh and Dawn Harper-Nelson (13.24) in eighth. Jones is also a former All-SEC hurdler with the Lady Tigers during her collegiate career.

With her third-straight world-leading time of 12.35 on Friday, Stowers is now the No. 7-ranked sprint hurdler in world history and the No. 3-ranked American all-time as she trails only the likes of American record holder Brianna Rollins (12.26) and former three-time Olympic Gold Medalist and World hurdle champion Gail Devers (12.33) on the USA’s all-time performance list.

The only other hurdlers to run faster than Stowers in the history of the sport include Bulgaria’s world-record holder Yordanka Donkova (12.21), Bulgaria’s Ginka Zagorcheva (12.25), Russia’s Ludmila Engquist (12.26) and Pearson (12.28).