SEC Champs to Tee Off at NCAA Regional Thursday 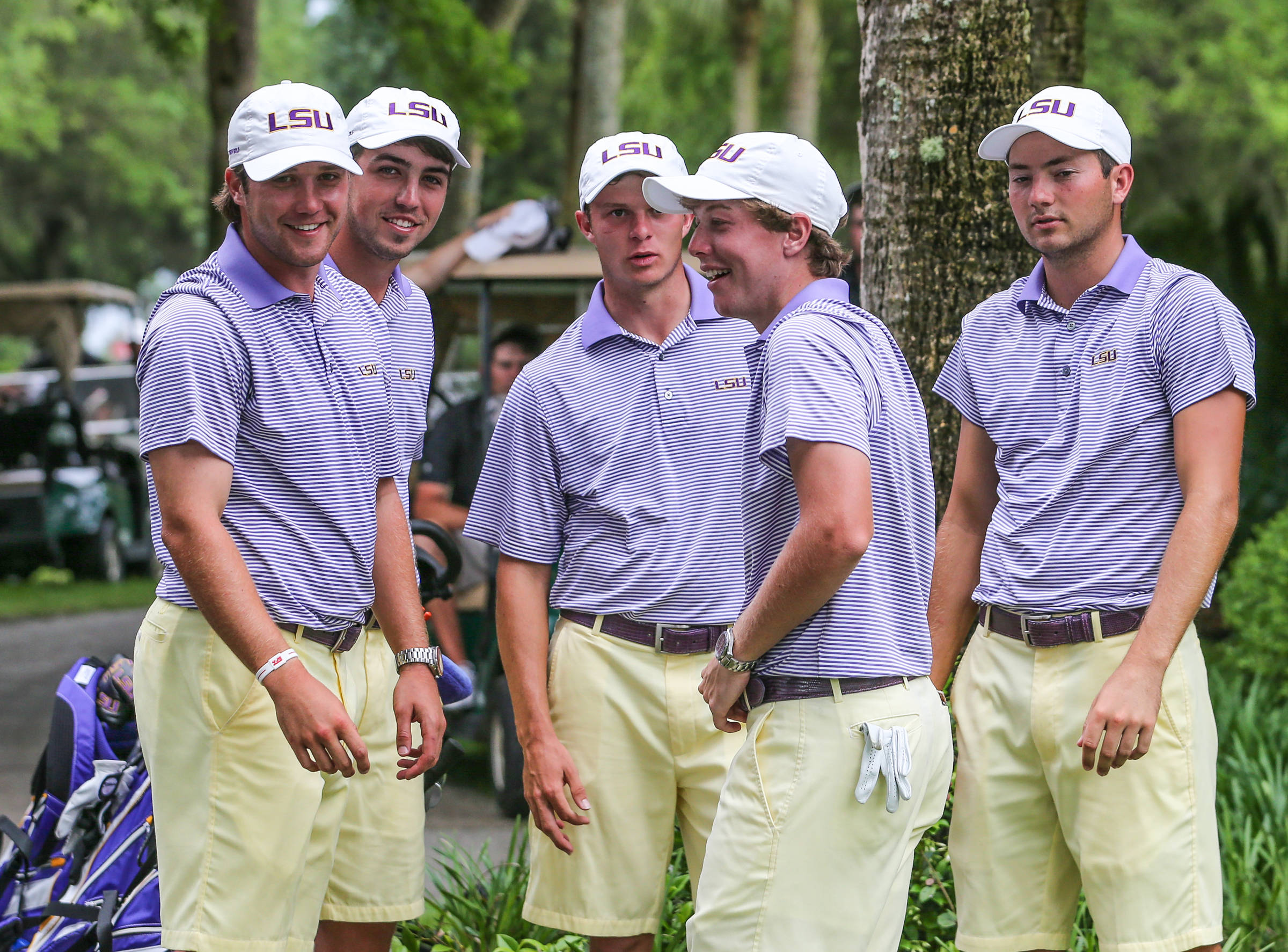 BATON ROUGE – The SEC Champion LSU Tigers have now set their sights on qualifying for the NCAA Division I Men’s Golf Championships for the fifth time in six seasons this weekend as they have made a trip to New Haven, Connecticut, to tee it up at the 2015 NCAA New Haven Regional beginning with Thursday’s first round at The Course at Yale.

In the wake of their title-clinching performance at the SEC Men’s Golf Championships a month ago, the No. 7-ranked Tigers were awarded the No. 2 seed in the 14-team field at the NCAA New Haven Regional with the regional announcements broadcast on Golf Channel’s Morning Drive show on Monday, May 4.

This marks the fifth time that The Course at Yale will play host to an NCAA Regional as the course will play to a par 70 and 6,753 yards for the three-day, 54-hole championship that begins Thursday.

The Top 5 teams at each of the six regional tournaments across the country will qualify for the 2015 NCAA Division I Men’s Golf Championships being held May 29-June 3 at Concession Golf Club in Sarasota, Florida.

As the No. 2 seed at the NCAA New Haven Regional, the Tigers have captured their highest regional seed in 10 seasons under the direction of head coach Chuck Winstead. They are joined in the field by No. 1 seed and No. 5-ranked Vanderbilt, No. 3 seed and No. 16-ranked South Florida, No. 4 seed and No. 20-ranked Oklahoma State and No. 5 seed and No. 29-ranked Arkansas.

The Tigers are paired with Vanderbilt and South Florida in Thursday’s opening round as the top three seeds are set to tee off in the first wave off of the front nine beginning at 7 a.m. CT. The pairings for the second and third rounds will be determined following the conclusion of each round. Golfstat will provide live scoring throughout the tournament as fans can follow the Tigers in action at http://www.golfstat.com.

LSU made program history last spring by qualifying for the eight-team match-play tournament for the national championship for the first time in the six seasons of the current format of the NCAA Championships. After tying for second place in stroke play and securing the No. 3 seed in match play, the Tigers advanced to the NCAA Final Four with a 4-1 defeat of No. 6-seeded UCLA in the national quarterfinals before falling to eventual national champion Alabama by the same scoreline in the semifinal round of match play.

By officially tying for third place as a team a year ago, the Tigers picked up their best finish at the NCAA Championships in 47 years when they last earned a third-place finish in the championship way back in 1967.

The Tigers have carried that momentum into the 2014-15 season in which they have captured four team titles in their 10 tournament appearances, including a three-shot victory at the SEC Championships to claim LSU’s first conference crown in 28 years since 1987 and their 16th SEC team championship in program history to rank second among all Southeastern Conference programs all-time.

The Tigers have also taken home the team title at the Golfweek Conference Challenge (Sept. 14-16), David Toms Intercollegiate (Oct. 4-5) and Talis Park Challenge (March 15-16) during the 2014-15 season. It marks just the sixth time in program history and the first time since 2010-11 that the Tigers have won four tournament titles in a single season.

Winstead, the 2015 SEC Coach of the Year, has named an unchanged lineup from the one that captured LSU’s SEC Championship nearly one month ago as senior All-American Ben Taylor joins a quartet of Second-Team All-SEC selections for 2015 in senior Stewart Jolly, junior Zach Wright and sophomores Brandon Pierce and Eric Ricard as one of the most talented rosters teeing it up in NCAA Regional play this weekend.

Three Tigers cracked the Top 10 of the final SEC Championships leaderboard in leading the Tigers to the conference title with Jolly setting the pace in a tie for fourth place at 5-under 205 in his fourth and final start as an LSU Tiger at the championship. Wright followed in a tie for sixth place at 4-under 206 for his best finish in three SEC appearances and Pierce ended in a tie for ninth place at 3-under 207 in his debut.

Pierce is the team’s leading scorer with a career-low 71.11 scoring average while starting all six tournaments for the Tigers during the 2015 spring season. In six appearances, Pierce has cracked the Top 20 individually on five occasions with three Top 10s. He fired a career-low of 7-under par 209 to tie for 10th place at The Prestige at PGA West before also tying for sixth place at the Valspar Invitational at Floridian.

Wright has posted a career-low of his own with a 71.85 scoring average in nine tournament appearances on the season as the team’s second-leading scorer. He has finished among the Top 20 of the final leaderboard in eight of his nine starts this season, while also earning a trio of top-10 finishes in 2014-15. That includes back-to-back Top 10s with a tie for fifth at the Aggie Invitational and tie for sixth at the SEC Championships.

Ricard is the only Tiger to appear in all 10 tournaments during the 2014-15 season, and like his teammates, has posted a career-best 72.03 scoring average to follow both Pierce and Wright as LSU’s third-leading scorer in his sophomore season. Ricard, who leads the Tigers with four top-10 finishes on the season, ranks No. 65 in Golfweek and No. 71 in Golfstat as one of the top players nationally.

Ricard earned his best career finish when he placed second overall at the Golfweek Conference Challenge back in the fall where he fired a career-low tournament score of 5-under par 211 to help lead the Tigers to first place in the team standings. He also tied for eighth place at the U.S. College Championship to close the fall season before tying for seventh place at The Prestige at PGA West in LSU’s spring season opener and tying for eighth place at the Talis Park Challenge to help pace the Tigers to another team title this spring.

While heading into NCAA Regional play as the No. 64-ranked player nationally by Golfweek and No. 81-ranked player nationally by Golfstat, Jolly is fresh off his best career finish at the SEC Championships when he tied for fourth place overall with a score of 5-under par 205 to lead LSU to the team title. It’s a performance that dropped his scoring average to an impressive 72.07 strokes per round to rank fourth on the team.

Jolly fired out of the blocks in the 2014 fall season with a third-place finish at the Carpet Capital Collegiate Classic before defending his individual title with a win at the Golfweek Conference Challenge for his second win of his collegiate career. Jolly’s tie for fourth place at the SEC Championships was his third top-10 finish of the season to seal his All-SEC status once again.

Jolly also looks to add the title of All-American to his name for the second-straight season after being honored as a Third-Team All-American by both PING and Golfweek following his junior season a year ago.

Like Jolly, Taylor was recognized as an All-American in his debut season with the program in 2013-14 while helping lead the Tigers into the NCAA Semifinals of match play after tying for sixth place individually at the 2014 NCAA Division I Men’s Golf Championships. He was announced as a PING Honorable Mention All-American in 2014, and looks to add even more honors to his resume in his final season.

While featuring in nine tournaments in his senior season, Taylor rounds out the lineup with the fifth-best scoring average on the team at 72.11 strokes per round while earning two top-five and three top-10 finishes on the season. That includes his first tournament victory as an LSU Tiger at the David Toms Intercollegiate during the 2014 fall season. The England international has also cracked Golfweek’s Top 100 player rankings for 2015 as the No. 95-ranked player in NCAA Division I heading into regional play.