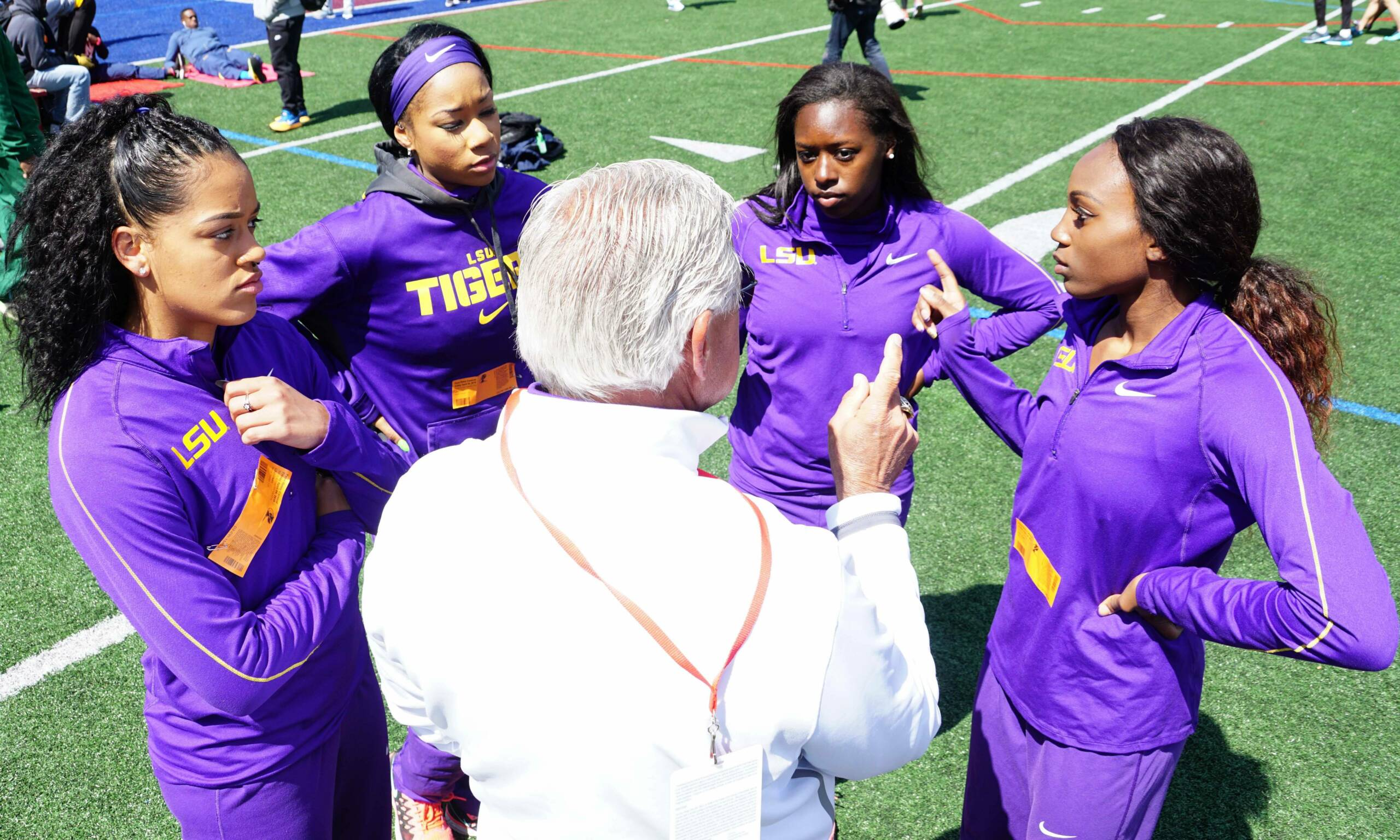 BATON ROUGE – The LSU Track & Field teams have arrived in Starkville, Mississippi, and are ready to kick off their championship season this weekend as they join their Southeastern Conference rivals in competing at the 2015 SEC Outdoor Track & Field Championships beginning Thursday at Mississippi State’s Mike Sanders Track Complex.

The multi-events resume Friday at 10 a.m. with the decathlon and 11 a.m. with the heptathlon, followed by the day’s first field events at 2 p.m. and the opening events on the track at 3:45 p.m.

This year’s SEC Outdoor Championships will conclude with a furious afternoon of competition at the Mike Sanders Track Complex on Saturday as events get underway at 1 p.m. in the field and 3 p.m. on the track. It will run through the 4×400-meter relays beginning at 6:25 p.m. with this year’s SEC team champions being crowned in a special award’s ceremony at approximately 6:45 p.m.

Live streaming video of the 2015 SEC Outdoor Track & Field Championships will be available online at ESPN3.com and through the SEC Network+ on the WatchESPN app on Friday from 3:40-6:50 p.m. CT and on Saturday from 2:50-6:50 p.m. as fans can watch their Tigers and Lady Tigers in action this weekend. ESPNU will also air a two-hour tape-delay highlight show of the championship on Thursday, May 21, from 7-9 p.m.

Mississippi State University in conjunction with Branch Sports Technology will provide live results throughout the weekend at the SEC Outdoor Championships events are available at http://branchsportstech.com. Fans can also receive live updates and behind-the-scenes coverage of the Tigers and Lady Tigers with liking LSU Track & Field on Facebook at http://facebook.com/lsutrackfield and by following @LSUTrackField on Twitter at http://twitter.com/lsutrackfield and Instagram at http://instagram.com/lsutrackfield.

“Our athletes have done a tremendous job to this point of preparing themselves to compete at the highest level in the championship season,” said LSU head coach Dennis Shaver ahead of the start of the SEC Outdoor Championships. “They have really bought into what we as a staff have asked of them over the course of the season, and they are now prepared to compete at their very best.

“This is a special group of young men and women that now has the opportunity to make their mark on this program, and that all starts this weekend as we look forward to another SEC Championship.”

The Tigers are the No. 2-ranked men’s team nationwide for the third-straight week as they trail only No. 1-ranked Texas A&M in the latest USTFCCCA Top 25 power rankings. In what will surely be the most competitive conference championship across the country this weekend, nine of the 14 men’s teams competing at the SEC Championships are among the NCAA’s Top 25 teams as No. 3 Florida, No. 8 Arkansas, No. 9 Georgia, No. 12 Alabama, No. 18 Mississippi State, No. 22 South Carolina and No. 24 Tennessee follow LSU and Texas A&M.

The women’s field this weekend also feature nine of the nation’s Top 25 teams, including six of the Top 10 programs in this week’s USTFCCCA Top 25 power rankings. The Lady Tigers are the No. 8-ranked squad for the women’s side for the third-straight week as they join No. 1 Arkansas, No. 3 Georgia, No. 4 Florida, No. 6 Kentucky, No. 9 Texas A&M, No. 16 Alabama, No. 19 Mississippi State and No. 25 Missouri.

The Lady Tigers have been crowned SEC Outdoor Champions a league-leading 13 times in their history, including five conference titles in the 10 previous seasons in which Shaver has been the head coach. They claimed the women’s team title five times in 2007, 2008, 2010, 2011 and 2012. The Florida Gators follow well back in second with five women’s team titles all-time at the SEC Outdoor Championships.

The Lady Tigers scored 65.5 points in four days of competition at the University of Kentucky a year ago to claim sixth place overall in the final women’s team standings at the 2014 SEC Outdoor Championships. Arkansas, which has now won four SEC Outdoor titles on the women’s side, took home the women’s team title last spring with a winning total of 123 points during the meet.

The Tigers will look to improve upon their eighth-place finish when they tallied 43 points a season ago. The Texas A&M men claimed their first ever SEC Outdoor title with a winning score of 155.5 points for the meet.

The Tigers have captured 22 SEC Outdoor Championships on the men’s side in the program’s storied history with their last victory coming 25 seasons ago in 1990. Under Shaver’s tutelage, they have finished runners-up a total of four times while coming up just one spot short of adding to their total of men’s team titles in 2007, 2008, 2010 and 2012.

LSU Track & Field saw its streak of 32-straight years of winning at least one event title at the SEC Outdoor Championships come to an end at the University of Kentucky a season ago, but they arrive at Mississippi State’s Mike Sanders Track Complex with plenty of firepower in their arsenal to open up a new streak this weekend. The Tigers and Lady Tigers had won at least one SEC event title in each season from 1982-2013 prior to their appearance at the SEC Outdoor Track & Field Championships a season ago.

Brown looks to be crowned an SEC Outdoor Champion for the second time in his collegiate career as he steps into the circle as the nation’s leading discus thrower for the 2015 season. The SEC Champion in the event as a sophomore in 2013, Brown boasts an SEC-leading and NCAA-leading throw of 213 feet, 5 inches, and has eclipsed the 200-foot mark while taking the title in all seven discus events he has entered in 2015.

Brown threw a seasonal best of 213-5 to defend his Penn Relays title back on April 25, breaking his own Penn Relays meet record of 210-10 and LSU school record of 212-2 that he set as a junior a season ago.

Norwood has also been one of the most talked about athletes nationwide during the 2015 outdoor season after opening his campaign with his NCAA-leading personal best of 44.44 seconds to win the men’s 400-meter dash at the LSU Alumni Gold back on April 18. It’s a performance that made Norwood the No. 8-ranked collegian outdoors in NCAA history in the one-lap event.

Norwood’s season-opening 44.44 remains his only 400-meter race of the campaign as he sets his sights on Derrick Brew’s 15-year-old school record and SEC Championship meet record of 44.29 set back in 2000. It’s also the first time an LSU sprinter had broken 45 seconds over 400 meters in nine years since Xavier Carter was crowned the 2006 NCAA Outdoor Champion with a time of 44.53 in the national final.

Norwood remains the No. 2-ranked 400-meter sprinter worldwide in 2015 as he trails only the time of 44.22 run by Grenada’s reigning Olympic Champion Kirani James in 2015. The 2015 NCAA Indoor Champion eyes the first SEC Outdoor title for the Tigers in the event since Carter in 2006. Two other Tigers have also been crowned SEC Outdoor Champions in the event, including Brew (1999, 2000) and Kelly Willie (2004, 2005).

On the strength of their performance as seniors with the Tigers this season, both Brown and Norwood are now receiving votes for The Bowerman Award Men’s Watch List identifying the top athlete in the sport.

Bliss has already enjoyed one of the most prolific seasons by a thrower in the history of the Lady Tiger program after being crowned the SEC Indoor Champion and NCAA Indoor Silver Medalist in the women’s shot put. In fact, Bliss set the SEC Indoor Championships meet record in winning her first career SEC title this season when she opened with a throw of 60-1 on her very first attempt.

Bliss raised her indoor school record twice more at the NCAA Indoor Championships when she threw 60-1 ¼ in the fifth round and 60-7 ¼ in the sixth round to score her second career NCAA silver medal and take home All-America honors in the event. She became the No. 8-ranked shot putter indoors in collegiate history with her performance in the national final.

She has taken her performance to yet another level in her final outdoor season as a Lady Tiger as she owns the NCAA’s leading shot put mark this spring with a winning throw of 60-8 in her last appearance over the LSU Invitational on May 2. It’s a mark that ranks her No. 9 on the NCAA’s all-time outdoor performance list in the event.

Like Brown and Norwood, Bliss has certainly been one of the most dominant athletes in collegiate track and field throughout the 2015 season with wins in 10 of the 11 shot put competitions in which she has entered on the campaign. She looks to dethrone Missouri’s defending SEC Outdoor Champion Jill Rushin and become just the fourth Lady Tiger to win the SEC Outdoor shot put title in the program’s history.

Acy, Ernest and Norwood also join senior Joshua Thompson in forming the SEC’s second-fastest 4×100-meter relay team in 2015 as they have run the second-fastest time nationally at 38.93 on the campaign.

After competing at the SEC Outdoor Track & Field Championships this weekend, the Tigers and Lady Tigers will make the trip to Jacksonville, Florida, to compete at the NCAA East Preliminary Rounds being held May 28-30 at North Florida’s Hodges Stadium. The semifinal and final rounds of the 2015 NCAA Division I Outdoor Track & Field Championships will then be held June 10-13 at Hayward Field in Eugene, Oregon.