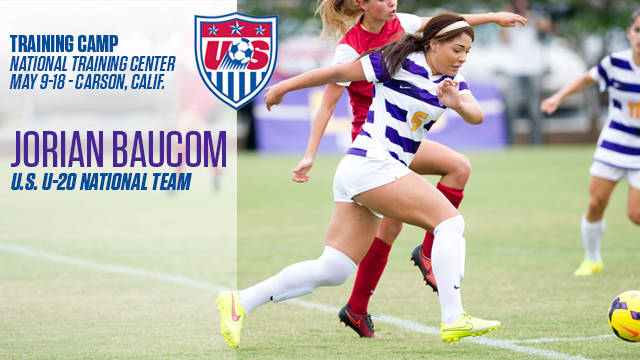 Baucom, who recently trained with the U.S. U-19 team from April 11-18, is among 24 U-20 standouts nationwide who will take part in the latest national camp that will run through May 18 in Carson.

According to the official training camp announcement posted to USSoccer.com on Thursday morning, U.S. U-20 head coach Michelle French will use the 10-day camp to make her final roster selections for the upcoming 2015 U-20 Women’s National Training Center Invitational that will be held at U.S. Soccer’s training center in Carson from June 2-6. Matches during the tournament will be streamed live at USSoccer.com.

Along with the United States, the four-team U-20 Women’s NTC Invitational will feature national sides from Brazil, Japan and Mexico as the tournament will attract many of the world’s top U-20 stars for the event.

Baucom is now part of the U.S. Women’s National Team in the U-19 and U-20 divisions that will soon focus on qualifying for the 2016 FIFA U-20 Women’s World Cup that will be held in Papua New Guinea. She is among 12 current college stars taking part in the latest U.S. U-20 WNT training camp beginning Saturday, while the remainder of the 24-player pool features high school stars that will soon be joining the college ranks.

“Jorian has had a tremendous offseason and has taken big strides in her game,” said LSU head coach Brian Lee. “She’s a huge talent, and I am excited to see her continued progression this summer and into the fall. We couldn’t be happier for Jorian. It’s always satisfying to see a player who puts in the time and effort that she has to be rewarded with these kinds of opportunities.”

A native of Scottsdale, Arizona, and product of Pinnacle High School, Baucom has made her return to the U.S. Women’s National Team setup this season after taking part in national training camps in the U-15, U-16 and U-18 divisions during her youth career before her arrival in Baton Rouge. She signed with the Tigers as a consensus five-star recruit and one of the top strikers nationally in the Class of 2014.

Baucom wrapped up her rookie season as LSU’s leading goal scorer with eight goals while also dishing out four assists for a team-best 20 points in 2014. She carried that form into the 2015 spring season in which she scored a team-leading three goals in the four matches in which she featured, helping the Tigers post an unbeaten 3-0-1 mark while on the pitch. Baucom actually missed LSU’s spring season finale against the defending national champion Florida State on April 11 as it was the first day of her recent camp with the U.S. U-19s at the U.S. Soccer National Training Center.