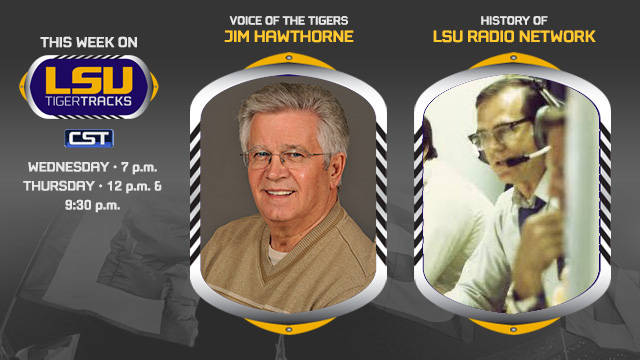 BATON ROUGE, La. – LSU Tiger Tracks, a program highlighting various aspects of the university and its athletic department, can be seen at 7 p.m. CT Wednesday and at 12 p.m. and 9:30 p.m. CT Thursday on Cox Sports Television.

LSU Tiger Tracks begins with a visit to the studio from “The Voice of the Tigers,” Jim Hawthorne, who will broadcast his final regular-season baseball series in Alex Box Stadium, Skip Bertman Field this weekend when the top-ranked Tigers take on Missouri. Hawthorne, who will retire from LSU at the end of the 2015-16 men’s basketball season, has served as the radio voice of LSU Baseball since 1984.

The show also features a special report by correspondent Garrett Walvoord on the long and distinguished history of the LSU Sports Radio Network, which has broadcast the greatest moments in Fighting Tiger athletics for decades.