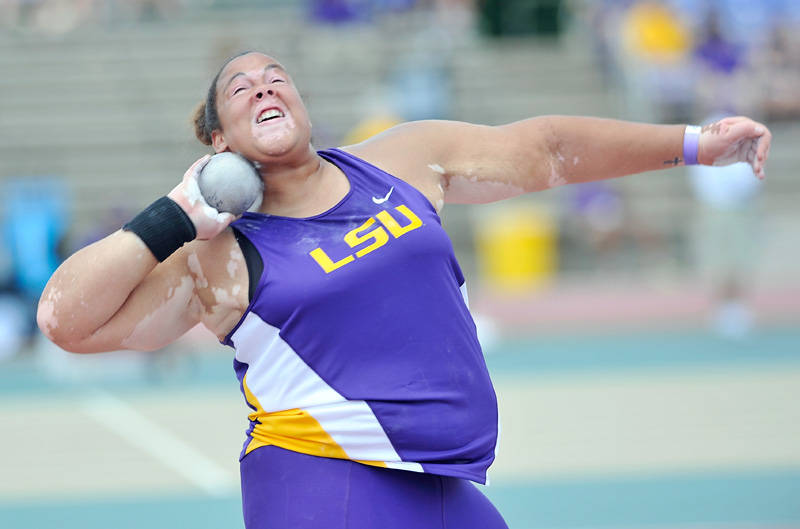 BATON ROUGE – After leading the No. 8-ranked Lady Tigers to a successful defense of their team title at the LSU Invitational on Saturday, senior shot put standout Tori Bliss and freshman sprint star Aleia Hobbs have each earned Southeastern Conference Athlete of the Week honors with the release of the SEC’s weekly awards on Tuesday afternoon.

Bliss has been recognized as the SEC Women’s Field Athlete of the Week for the second time this season thanks to her NCAA-leading throw of 60 feet, 8 inches to win the women’s shot put title at the LSU Invitational, breaking her own school record in the event and smashing the 32-year-old Bernie Moore Stadium record in victory.

Hobbs has picked up her first career SEC weekly honor as the SEC Women’s Freshman of the Week after sprinting to a wind-legal personal best of 11.39 seconds to win the 100-meter title in Saturday’s meet.

The No. 8-ranked Lady Tigers defended the team title they won at the inaugural LSU Invitational a year ago while racking up 146 points in 18 events contested during the meet. The No. 20-ranked Alabama Crimson Tide finished runner-up with 134 points, followed by the No. 3-ranked Florida Gators in third place with 93 points, the Miami Hurricanes in fourth place with 87 points and Ole Miss Rebels in fifth place with 84 points.

Bliss, who was last honored as the SEC Women’s Field Athlete of the Week back on Jan. 13 during the indoor season, went out with a bang in her final appearance as a Lady Tiger at the Bernie Moore Track Stadium this past Saturday as she smashed her own outdoor school record and the 32-year-old stadium record with an NCAA-leading throw to headline this year’s LSU Invitational.

Already well in the lead with a top throw of 57 feet, 1 inch in the second round of qualifying, Bliss put the title out of reach with a lifetime personal best of 60-8 on her fifth attempt to eclipse the school record of 57-5 ½ she set at Arizona’s Jim Click Shootout back on April 11 and take down the Bernie Moore Track Stadium record of 59-2 set by Arizona’s Meg Ritchie during the 1983 season.

Bliss overtook Southern Illinois’ Raven Saunders (59-9 ¾) and Missouri’s Jill Rushin (58-1 ¾) for the NCAA’s No. 1 ranking in the women’s shot put in 2015 while emerging as an NCAA-title threat in the event.

By throwing a lifetime best of 60-8 on Saturday, she also became the No. 9-ranked shot putter outdoors in NCAA history. Bliss set her previous lifetime PR of 60-7 ¼ in the event for a silver-medal-winning performance at the NCAA Indoor Championships back in March. She has now eclipsed the 60-foot mark on four occasions indoors and outdoors in 2015.

A native of Portage, Indiana, Bliss has certainly been one of the most dominant athletes in collegiate track and field between the 2015 indoor and outdoor seasons. She has won 10 of the 11 shot put competitions she’s entered this season, including all four outdoors with wins at the Jim Click Shootout (57-5 ½), LSU Alumni Gold (57-2) and Penn Relays (56-5 ¾) already under her belt before Saturday’s victory.

Hobbs has been recognized as the SEC Women’s Freshman of the Week after winning her first collegiate title in the 100-meter dash when she sprinted to the finish line with a wind-legal personal best of 11.39 (-0.5) on Saturday to also headline a team-title defense by the Lady Tigers at the second-annual LSU Invitational. Hobbs raced to a personal record in her second-straight 100-meter race as she eclipsed her previous best of 11.40 (+0.1) set in a runner-up finish at the LSU Alumni Gold meet back on April 18.

Hobbs took the tape over freshman teammate Mikiah Brisco, who equaled her wind-legal PR in the race with a time of 11.47 for second place. She also beat the likes of Ole Miss freshman standout Shannon Ray with a time of 11.49 for third place and Florida All-American Shayla Sanders with a time of 11.63 for fourth place to the finish line for her first collegiate victory outdoors.

By running a wind-legal PR of 11.39, Hobbs ran the third-fastest 100-meter time collegiately for the weekend, and cracked the Top 20 nationally as the nation’s No. 18-ranked 100-meter sprinter among all classifications in 2015. She also became the No. 3-ranked freshman in the women’s 100-meter dash nationwide for the 2015 season.

Not only did Hobbs win the 100 meters with a personal-best time, but she also ran the second leg on LSU’s 4×100-meter relay team that clocked its second-fastest time of 2015 with a run of 43.41 to finish runner-up to Florida’s 43.22 in the first final on the track to open the afternoon session at the LSU Invitational.

With the selection of both Bliss and Hobbs as SEC Athletes of the Week on Tuesday afternoon, eight different Tigers and Lady Tigers have accounted for 12 SEC weekly awards between the indoor and outdoor seasons in 2015. Bliss is LSU’s third athlete to win multiple awards this season as senior Rodney Brown has been named the SEC Men’s Field Athlete of the Week three times and freshman Daeshon Gordon has been picked the SEC Women’s Freshman of the Week twice between the indoor and outdoor seasons.