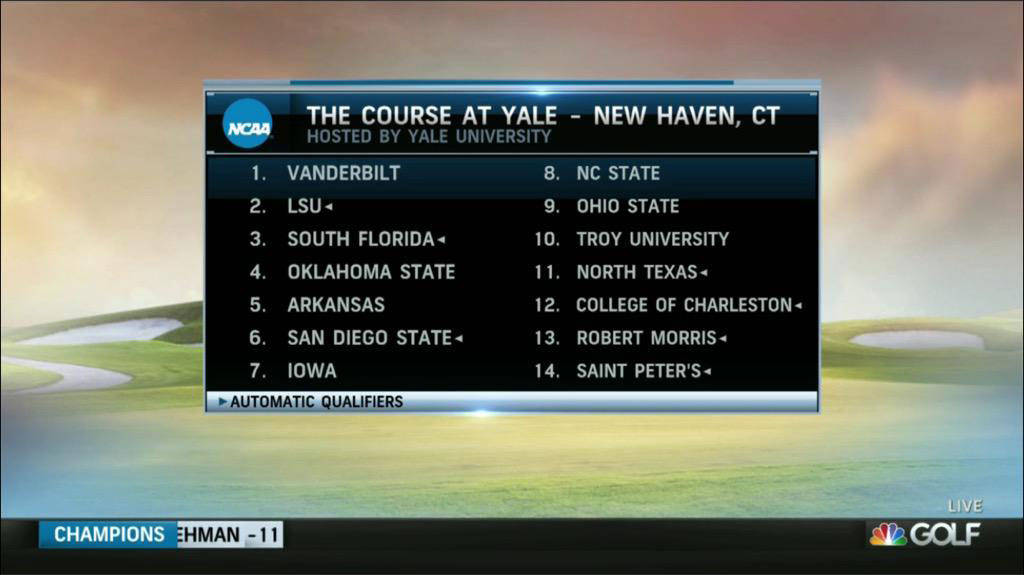 BATON ROUGE – After being crowned the SEC Champions with their victory at the SEC Men’s Golf Championships just two weeks ago, the No. 7-ranked LSU Tigers were awarded the No. 2 seed at the NCAA New Haven (Conn.) Regional on Monday morning as they will tee off as part of the 14-team field in the event being held May 14-16 at The Course at Yale.

The fields for each of the six NCAA Regional Championships to be held next week were announced Monday morning during the Golf Channel’s Morning Drive show from 9-10 a.m. CT.

Each of the 14 teams in the field at the NCAA New Haven Regional will be competing for five qualifying spots into the 2015 NCAA Division I Men’s Golf Championships that will be held May 29-June 3 at Concession Golf Club in Sarasota, Florida. Five teams will qualify from each of the six NCAA Regionals across the country to make up the 30-team field at this year’s NCAA Championships.

LSU made program history last spring by qualifying for the eight-team match-play tournament for the national championship for the first time in the six seasons of the current format of the NCAA Championships. After tying for second place in stroke play and securing the No. 3 seed in match play, the Tigers advanced to the NCAA Final Four with a 4-1 defeat of No. 6-seeded UCLA in the national quarterfinals before falling to eventual national champion Alabama by the same scoreline in the semifinal round of match play.

By officially tying for third place as a team a year ago, the Tigers picked up their best finish at the NCAA Championships in 47 years when they last earned a third-place finish in the championship way back in 1967.

The Tigers have carried that momentum into the 2014-15 season in which they have captured four team titles in their 10 tournament appearances, including a three-shot victory at the SEC Championships to claim LSU’s first conference crown in 28 years since 1987 and their 16th SEC team championship in program history to rank second among all Southeastern Conference programs all-time.

The Tigers have also taken home the team title at the Golfweek Conference Challenge (Sept. 14-16), David Toms Intercollegiate (Oct. 4-5) and Talis Park Challenge (March 15-16) during the 2014-15 season. It marks just the sixth time in program history and the first time since 2010-11 that the Tigers have won four tournament titles in a single season.

“This is always an exciting time of the year for our team,” said LSU head coach Chuck Winstead of his team’s regional selection for the eighth-straight season. “We will continue to seek improvement and look forward to the challenge of competing at Yale next weekend.”

While the Tigers have earned their highest regional seed in 10 seasons under Winstead’s direction, they will be joined in the field at the NCAA New Haven Regional by No. 1 seed and No. 5-ranked Vanderbilt, No. 3 seed and No. 16-ranked South Florida, No. 4 seed and No. 20-ranked Oklahoma State and No. 5 seed and No. 29-ranked Arkansas. Also making up the 14-team field are No. 6 seed San Diego State, No. 7 seed Iowa, No. 8 seed NC State, No. 9 seed Ohio State, No. 10 seed Troy, No. 11 seed North Texas, No. 12 seed College of Charleston, No. 13 seed Robert Morris and No. 14 seed Saint Peter’s.

Six NCAA Regionals will be played across the country as teams will look to finish in the Top 5 of the final team standings to make up the 30-team field at the 2015 NCAA Division I Men’s Golf Championships.