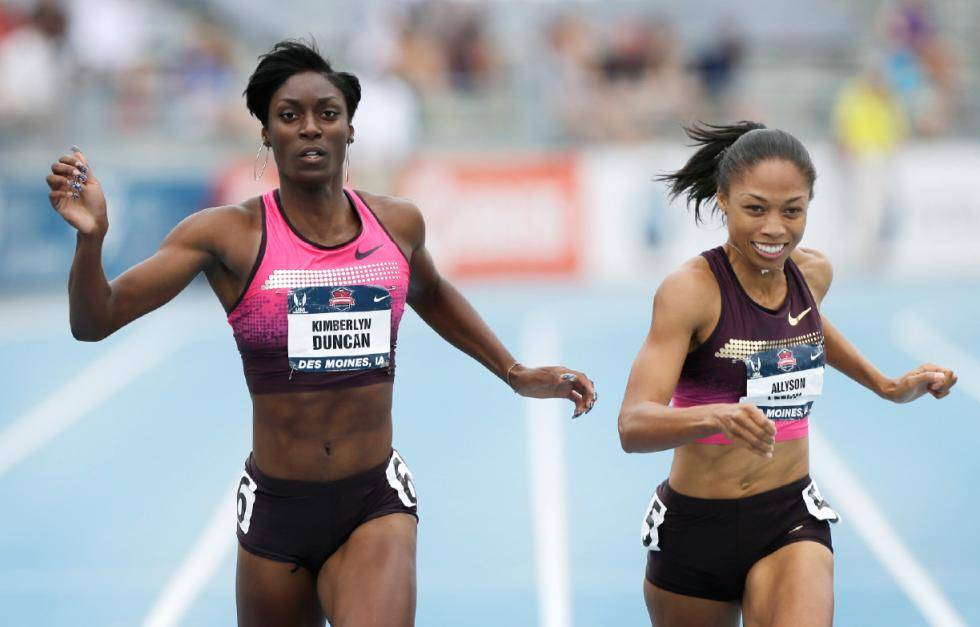 NASSAU, Bahamas – Two former Lady Tigers lined up at the IAAF/BTC World Relays Championship at Nassau’s Thomas Robinson Stadium this weekend and took their place on the award podium as silver medalists as Samantha Henry-Robinson ran the 4×200-meter relay on Saturday and Kimberlyn Duncan lined up in the 4×100-meter relay on Sunday in the meet finale.

Running the leadoff leg for the Jamaicans, Henry-Robinson teamed with Veronica Campbell-Brown, Shericka Williams and Sherone Simpson in scoring the silver medal in the women’s 4×200-meter relay final with a run of 1 minute, 31.73 seconds to finish runners-up to Nigeria’s world-leading 1:30.52 in Saturday’s final.

Germany bagged the bronze medal in 1:33.61, followed by China (1:34.89) in fourth place and Ireland (1:36.90) in fifth place. France and the United State did not finish the race, while Bahamas was disqualified.

Henry-Robinson, who recently won an Olympic silver medal as part of Jamaica’s 4×100-meter relay pool at the London Games in 2012, continued added to her post-collegiate honors this weekend at the second-annual IAAF/BTC World Relays Championship after wrapping up her four-year collegiate career in 2010 as a 15-time NCAA All-American, four-time SEC Champion and eight-time All-SEC performer as a Lady Tiger.

Duncan climbed the medal podium at the IAAF/BTC World Relays Championship for the second-straight season as she helped lead the United States to the silver medal in the women’s 4×100-meter relay on Sunday for her performance. Running the third leg, she combined with fellow Americans Tianna Bartoletta, Allyson Felix and Carmelita Jeter to cross the finish line in 42.32 behind Jamaica’s winning 42.14.

A gold medalist in the women’s 4×200-meter relay during the inaugural event in 2014, Duncan medaled on the international stage for the second time in her career while making a third international appearance for the United States. She made her IAAF World Championships debut in the red, white and blue in Moscow, Russia, in 2013 following her final collegiate season at LSU.

Duncan is one of the all-time great Lady Tigers as a seven-time NCAA Champion, 12-time SEC Champion and 14-time All-American in her collegiate career, as well as the women’s Bowerman Award winner for 2012.

A team from Great Britain & Northern Ireland trailed Jamaica and the United States across the finish with a time of 42.84 to take home the bronze medal in the women’s 4×100-meter relay. Rounding out the field were Canada in fourth place at 42.85, Trinidad & Tobago in fifth place at 42.88, Brazil in sixth place at 42.92, Nigeria in seventh place at 42.99 and Switzerland in eighth place at 43.74.

Medals for LSU’s Athletes at the IAAF World Relays Championship