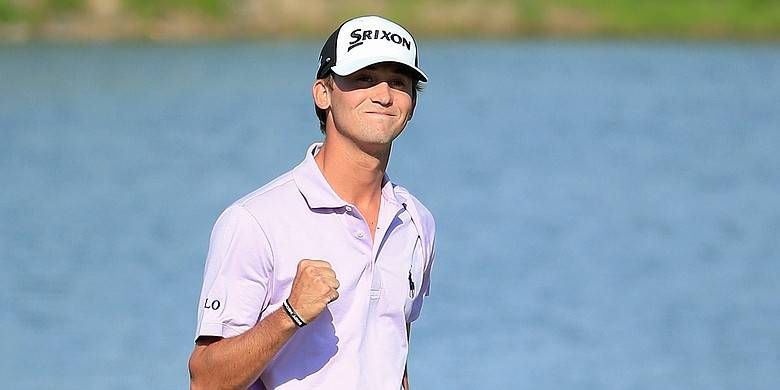 NEWBURGH, Ind. – After seizing the lead while matching Victoria National Golf Club’s course record with an 8-under par 64 in Saturday’s third round, LSU alumnus Smylie Kaufman surged to a five-shot victory with a 1-over par 73 in Sunday’s final round to claim his first professional title at the Web.com Tour’s United Leasing Championship presented by PTI.

Kaufman teed off in the final round with a four-shot lead at the top of the leaderboard thanks to a brilliant round of 8-under 64 on Saturday in which he carded nine birdies and just one bogey for his round.

After also opening the championship with an even-par 72 in the first round on Thursday and dipping into red figures with a 3-under par 69 in the second round on Friday, Kaufman scored a five-shot victory with his final round score of 1-over par 73 to finish clear of the field with a winning 72-hole score of 10-under par 278.

Adam Long, Jonathan Randolph and Ryan Spears finished five shots back in a three-way tie for second with a final tournament score of 5-under par 283 to wrap up the weekend as Kaufman’s nearest challengers.

“I’m blown away. Shocked. I still can’t comprehend it all, but I’m so excited about getting the win,” Kaufman said in a recap posted to the Web.com Tour’s page on PGATOUR.com. “It wasn’t perfect. I made mistakes all week. I just stayed composed and believed in what I was doing. You always hear the television announcer talk about not playing to lose. I wasn’t going to do that. I was going to leave it all out there.”

A native of Birmingham, Alabama, Kaufman has caught fire in recent weeks while competing on the Web.com Tour as his victory at the United Leasing Championship presented by PTI on Sunday comes on the back of a pair of tie for fourth-place finishes at the Chitimacha Louisiana Open presented by NACHER on March 29 and El Bosque Mexico Championship on April 19.

Like each of his fellow competitors on the Web.com Tour, Kaufman is looking to finish in the Top 25 of the final money list this season to earn official membership on the PGA TOUR for the 2015-16 season. Kaufman has racked up his $159,535 in total earnings this season in just his last three starts after missing the cut in his first three Web.com Tour appearances of the 2014-15 season.

Kaufman was joined in the field at the United Leasing Championship presented by PTI this weekend by two other former Tigers as All-Americans Andrew Loupe and Curtis Thompson ended up 11 shots off the pace for a tie for 20th place on the final leaderboard with matching scores of 1-over par 289 during the tournament. Thompson cracked the Top 20 in the end thanks to his best round of the weekend with a 5-under par 67 in the final round, while Loupe fired a 2-under 70 in the first and third rounds for his best scores of the weekend.