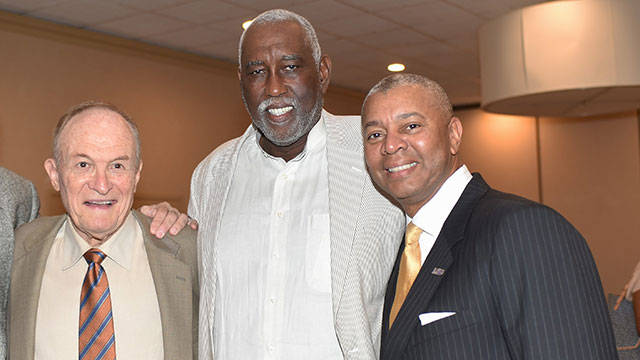 BATON ROUGE — The star who helped re-launch the Tulane University basketball program in 1989 and the player who broke racial barriers at LSU in the early 1970s were the major honorees at Saturday’s 41st Annual Louisiana Association of Basketball Coaches Awards Banquet.

Inducted into the Louisiana Basketball Hall of Fame was Tulane’s Anthony Reed.

The other major honoree was former LSU great Collis Temple, Jr., who received the LABC’s Mr. Louisiana Basketball award. This award is given annually to someone who has made a significant, long-term contribution to the game of basketball at any level in the State of Louisiana.

Also honored at the banquet were Louisiana’s major college, small college, junior college and high school basketball players and coaches of the year, along with the top pro player from the state.

Temple played at LSU for coaches Press Maravich and Dale Brown from 1971 to 1974, where he broke racial barriers and went on to earn All-Southeastern Conference honors, finishing his career as the eighth leading rebounder in LSU history. In 1995 he was inducted into the Louisiana Basketball Hall of Fame.

Following his college and professional basketball playing career, he began assisting others through the Baton Rouge Sports Academy program he created, which over the years has developed many young players (including his own sons) to have the ability to earn a college education through basketball.

The LABC also presented the Pete Maravich Memorial Award, honoring Louisiana’s Major College Player of the Year, to sophomore forward Jarell Martin of LSU. This season Martin was an honorable mention Associated Press All-American and a first team All-Southeastern Conference, All-Louisiana and USBWA All-District selection. He averaged 16.9 points and 9.2 rebounds and had 15 double-double games. He scored in double figures in 28 of 33 games, including ten 20-point games, and had single game highs of 28 points, 16 rebounds and 6 blocks.

Coach Johnny Jones of LSU received the Tommy Joe Eagles Memorial Award as Louisiana’s Major College Coach of the Year. In his third season, he led the Tigers to a third place finish in the Southeastern Conference and to its first NCAA Tournament appearance since 2009 with a 22-11 record. The 22 wins were the most in a season at LSU since 2009.

The Bob Pettit Award, which is given to Louisiana’s Professional Player of the Year, was presented to forward Paul Millsap of the Atlanta Hawks. In his ninth year in the NBA, the former Louisiana Tech star averaged 16.7 points and 7.8 rebounds. Millsap had 15 double-double games and single game highs of 30 points, 17 rebounds, 7 assists and 5 steals. He was also selected to play in the NBA All-Star Game for the second straight season.

Also honored for his play was LSU signee Brandon Sampson of Madison Prep, who was named the LABC’s top player in Class A this past season.