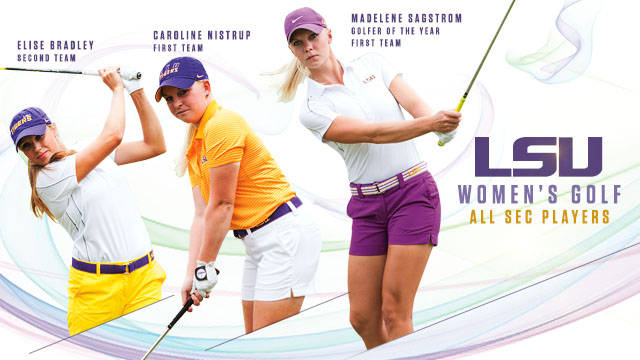 BATON ROUGE – LSU senior Madelene Sagstrom, ranked No. 2 in the nation in women’s college golf by both Golfweek and Golfstat, has been named the 2015 Southeastern Conference Women’s Golfer of the Year on the Coaches All-SEC team announced Friday by the league office.

Sagstrom and the seventh-ranked Lady Tigers will go for a spot in the NCAA Championships starting next Friday (May 7) in Raleigh, North Carolina, when they take part in one of the four NCAA Regionals.

Sagstrom also made first team All-SEC for the third straight year and was joined there for the second straight year by sophomore Caroline Nistrup of Denmark. Louisiana native Elise Bradley of Mandeville was named to the league’s All-SEC second team.

Sagstrom is the third LSU women’s golfer to earn SEC Player of the Year honors, joining Jenny Lidback in 1986 and Kristi Coats in 1991.

The native of Sweden is in the process of a record-breaking season as the active leader in the SEC in stroke average at 71.07 for 27 rounds. She is on pace to be the first LSU women’s golfer to average below 72 for a season of golf in the 36-year history of the LSU program. Megan McChrystal, in 2010-11, averaged the present school record for single season stroke average at 72.35.

Sagstrom becomes the sixth LSU women’s golf to be named on the All-SEC team three times and joins Megan McChrystal (08-11), Ashley Winn (95-98) and Meredith Duncan (99-02) as the only golfers to be named to three All-SEC first teams in their careers. Duncan like Sagstrom did it in her final three seasons, while McChrystal and Winn had one second team and three first team citations as LSU women’s golf only four-time All-SEC selections.

With a total of 17 top 10 finishes (7 this year), which is seventh most in school history, Sagstrom has finished no worse than fourth in each of the last six tournaments while posting a combined total of 25-under par over the last 19 rounds dating back to a 3-under 69 in the final round of the Lady Tar Heel tournament in October.

Sagstrom finished T4 at 6-under in The Alamo, T3 at -1 at the Lady Puerto Rico, T1 with teammate Nistrup in the Allstate Sugar Bowl Intercollegiate, second after losing in a playoff in the Darius Rucker Intercollegiate at 6-under, third at even par in the LSU Tiger Golf Classic and third after a 5-under score in the SEC Championships.

Sagstrom’s win at the Allstate was the second of her career and made her the ninth golfer in LSU women’s history to win multiple individual titles during their career.

Nistrup had a second straight outstanding year in earning her second straight first-team citation, averaging 72.30, which entering the regional is also better than any stroke average in any previous season at LSU. Nistrup has had eight top 10 finishes in two years, four this year, and her first collegiate win came when she tied teammate Sagstrom in the Allstate Sugar Bowl Intercollegiate at 4-under 212.

Nistrup also finished in 2nd place with one of the lowest 54-hole scores in school history when she posted rounds of 66-70-69 to post 11-under 205 in The Alamo in San Antonio to close out the fall.

The Sagstrom-Nistrup first team selection marks the eighth time in program history that LSU has had two Lady Tigers on the SEC’s first team.

Bradley’s second team honors highlighted what has been one of the most improved seasons in college golf in the country this year. Bradley captured her first collegiate title in the regular season finale when she won in extra holes the title in the LSU Tiger Golf Classic at the University Club in Baton Rouge. Bradley, who had four top 10 finishes on the year, posted 74-68-72 to finish at -2, 214.

The Lady Tiger golf team has had three team wins on the season and second place finishes in three other events as it looks to return to the NCAA Championships for the first time since the back-to-back third place finishes in 2011 and 2012. LSU is the second seed in the Raleigh regional tournament and is making its 21st appearance since the regional tournaments began qualifying teams for the NCAA Championships in 1993.

The 2015 All-Southeastern Conference Women’s Golf Team as selected by the league coaches: