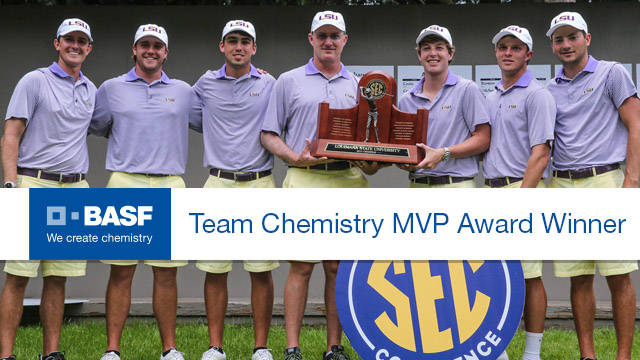 BATON ROUGE – The LSU men’s golf program captured its first SEC Championship trophy since 1987 and has been selected among the university’s athletic programs with the BASF Team Chemistry MVP Award for the month of April.

The Tigers overcame a three-shot hole during the final day at the Sea Island Golf Club’s Seaside Course in St. Simons Island, Georgia and ended up winning the event by three strokes over South Carolina and Vanderbilt.

For LSU, it was the program’s 16th SEC Championship and the program’s first since the sophomore season of the great David Toms 28 years ago. For their efforts, the Tigers also collected Golfweek’s National Team of the Week for the first time since April 2011.

The Tigers have won four tournament titles in the same season for the sixth time in program history and have garnered 21 team titles under 10th year coach Chuck Winstead.

Stewart Jolly, Zach Wright and Brandon Pierce secured Top 10 finishes, while Ben Taylor and Eric Richard tied for 31st place for the Tigers. Jolly sparked the comeback on the back nine. He holed a 4-iron from the fairway on the par-five 15th hole for eagle before he carded a birdie at the par-three 17th hole en route to a team-low round of 69.

Winstead is the third coach to earn SEC Coach of the Year honors. He joined Buddy Alexander (1986) and Britt Harrison (1989). Jolly, Pierce, Richard and Wright each came away with All-SEC Second-Team accolades. It marked the first time in program history that LSU had a quartet of golfers secure All-SEC. Jolly was an All-SEC First-Team performer last season.

LSU returns to action at the NCAA Regionals which run from May 14-16. The Tigers will find out their NCAA destination on Monday, May 4 at 9 a.m. during the NCAA selection announcement televised by the Golf Channel.