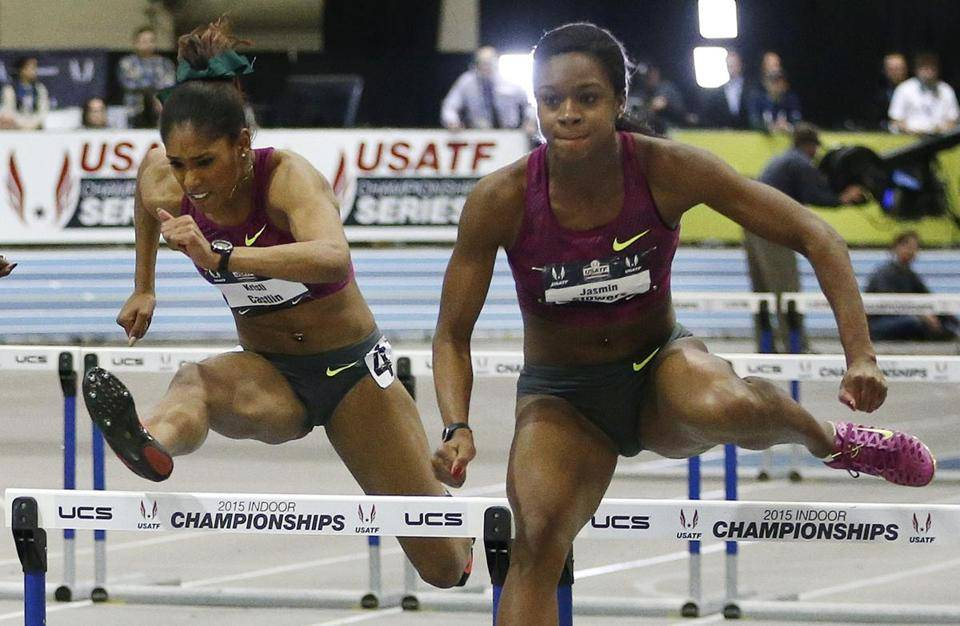 BATON ROUGE – After clocking the world’s fastest time in the 100-meter hurdles for the 2015 season with a meet record of 12.40 seconds at the 106th Drake Relays last weekend, former Lady Tiger All-American and World Championships hopeful Jasmin Stowers was honored on Thursday afternoon as the USA Track & Field Athlete of the Week.

Stowers becomes the sixth athlete with ties to the LSU Track & Field program to be named the USATF Athlete of the Week with a total of nine selections by the Tigers and Lady Tigers since the 2005 season.

Now in its 14th year, USATF’s Athlete of the Week program is designed to recognize outstanding performers at all levels of the sport in the United States. The USATF names a new honoree each week, and features the athlete on http://www.usatf.org. Selections are based on top performances and results from the previous week.

Stowers catapulted herself to the top of the 2015 World rankings in the 100-meter hurdles while shattering her own wind-legal personal best as she sprinted to the finish line in 12.40 (+1.5) for the Women’s 100-Meter Hurdles Beijing World Championships Preview title on a chilly Saturday afternoon at the 106th Drake Relays. It smashed her previous PR of 12.71 in the event she set last summer in the 2014 season.

“When I crossed the finish line, my focus was not on the time,” Stowers shared in USATF’s official announcement posted to http://www.usatf.org. “I was just happy I won and ran a clean race. When I crossed that line and realized I ran 12.40, I was stunned. The USA 100 hurdle competition is always competitive. I’m just thankful I was able to compete with some of the best hurdlers in the world.”

Perhaps an underdog to Dawn Harper-Nelson, the 2008 Olympic Champion and 2012 Olympic Silver Medalist, and Brianna Rollins, the reigning World Champion, when taking her mark at the start line in the event, LSU’s former hurdle star took flight in her first outdoor season as a professional with a resounding victory.

Running out of lane No. 7, Stowers fired out of the blocks and held steady with the rest of the field before taking the lead over the third hurdle of the race. She never looked back, surging ahead over both the seventh and eighth hurdles before extending her lead over the ninth and 10th hurdles to cross the finish line more than three tenths of a second ahead of her nearest competitors.

Stowers’ victory was sealed when her winning time of 12.40 flashed on the scoreboard ahead of Harper-Nelson (12.71) in second place, Kristi Castlin (12.72) in third place and Rollins (12.75) in fourth place.

In a race that was run with a legal tailwind of +1.5 meters per second, Stowers (12.40) smashed the previous Drake Relays meet record of 12.58 set by defending champion Castlin just one year ago. Her 12.40 is also the fastest hurdle time ever run this early in a season in the history of the sport, and makes Stowers the 12th-fastest hurdler in World history and the fifth-fastest American of all-time.

Rounding out the field were Queen Harrison (12.76) in fifth place, Sharika Nelvis (12.86) in sixth place, Tiffany Porter (12.90) in seventh place and Jacqueline Coward (13.20) in eighth place overall. Porter of Great Britain actually entered the race as the previous world leader in the event with a seasonal-best time of 12.56 before Stowers smashed it with her 12.40 on Saturday.

It has already been an outstanding debut season as a professional for Stowers as she has already been crowned the 2015 USA Indoor Champion in the 60-meter hurdles this season with an indoor personal best.

The 2014 NCAA Outdoor Silver Medalist and former seven-time All-American and five-time SEC Champion in four seasons with the Lady Tigers from 2011-14, Stowers claimed her first career national championship with a PR of 7.84 in the final of the 60-meter hurdles at the USA Indoor Championships held at the Albuquerque (N.M.) Convention Center earlier this year. It was a performance made Stowers the second-fastest hurdler in the world rankings for the 2015 indoor season, trailing only the world-leading time of 7.83 run by Nelvis this season.