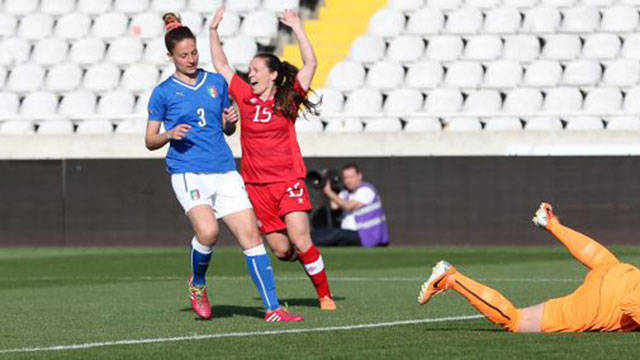 BATON ROUGE – Allysha Chapman’s dream of representing her native Canada in a World Cup will soon come true as the former LSU Soccer standout has been named to head coach John Herdman’s 23-player squad that will wear the Maple Leaf at the 2015 FIFA Women’s World Cup to be held on Canadian soil later this summer from June 6-July 5.

LSU Tigers have littered the national team rosters of such nations as the United States, Canada, Colombia, England, Mexico and New Zealand while competing in various age group World Cups over the past decade, but Chapman will be the first LSU Soccer star to feature at the highest level of women’s soccer worldwide when she competes at the FIFA Women’s World Cup.

Herdman named Chapman among the 23 players making up the Canadian Women’s National Team that will take on China PR in the opening match of the 2015 FIFA Women’s World Cup on June 6.

“Today marks the culmination of three years of dedicated work from the team, and we are pleased with the final selection,” Herdman said Monday in the official announcement of Canada’s World Cup squad posted to CanadaSoccer.com. “After the Olympics, we challenged the players to shed an old skin and strive to be even better as a team and as individuals. They all committed wholeheartedly to this vision, and competition for each position was fierce. Ultimately, we feel that this group of 23 makes us the best team we can be across our four corners of the game. They fully deserve this honor.”

A year ago I wasn’t in consideration. Today I had the honour of being named to Canada’s World Cup roster. NEVER GIVE UP! #canWNT #Canada2015

“Chappy” has gone on to earn 11 international caps with nine starts for Canada at the senior level over the past six months, highlighted by scoring her first international goal with a winner in the 51st minute for a 1-0 win over Italy in the semifinal round of the 2015 Cypress Women’s Cup back on March 10.

A three-time All-SEC performer and the 2011 SEC Defensive Player of the Year during her collegiate career, Chapman’s professional career has taken off after playing her final season with the Tigers in the fall of 2011. It is a career that saw her added to the Dash’s squad as an allocated national team player from her former club team Eskilstuna United DFF in Sweden.

Chapman actually missed the Dash’s 2015 National Women’s Soccer League season opener on April 10 making her last international appearance with Canada as she started in defense and played the full 90 minutes in a friendly match against France played in front of 11,441 fans at the Stade Robert-Bobin Evry in the French city of Bondoufle. Canada dropped the match by a 1-0 scoreline to the powerful French side.

Before reigniting her international career at the senior level, Chapman was a two-year member of Canada’s Under-20 Women’s National Team, even appearing at the 2008 FIFA U-20 Women’s World Cup in Chile.

“We’ve got a fantastic group of players here that are ready to step up and proudly represent their country on the biggest stage,” Herdman added in the official announcement of the team posted to CanadaSoccer.com on Monday. “It’s now up to Canadians to show them they are not alone in this journey and that they’ve got the strength of an entire country with them.”