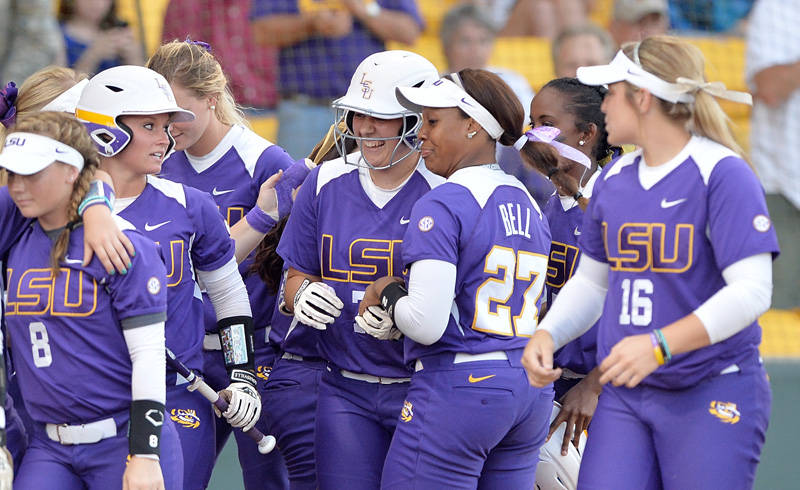 BATON ROUGE, La. – The No. 6 LSU softball team opens a four-game stretch of home games leading to the end of the 2015 regular season on Wednesday evening, hosting the Southeastern Louisiana Lady Lions in a mid-week clash at 6 p.m. in Tiger Park.

Fans unable to attend Wednesday’s game can listen to the game online on ESPN 104.5/104.9 locally in Baton Rouge through the Geaux Zone on LSUsports.net with Patrick Wright as there will be no live video stream available.

The contest against the Lady Lions is also the final “Louisiana Purchase” game of the year, as fans who need that final stamp on their card upon arrival on Wednesday will receive an LSU duffel bag.

LSU enters the week with an overall mark of 42-8 with four games remaining, coming off a series loss to No. 9 Missouri over the weekend, but taking the finale 9-0 in five innings for the team’s 17th run rule victory of the year in the process. At 14-7 in the Southeastern Conference, the Tigers are tied for third in the league standings with Alabama, but remain in one of those coveted top four spots that receive a bye in the SEC tournament.

Although LSU dropped the series, the team fell just three spots in the new NFCA Top 25 to sixth, while falling just two positions in the USA Softball Top 25 poll to fifth. When the new RPI rankings came out on Monday the Tigers were still second, continuing to help secure a possible top eight national seed two weeks from now when the NCAA tournament selections are announced.

Hours before taking to the field in the finale on Monday, it was announced by USA Softball that junior infielder Bianka Bell was selected to join for the USA Women’s National Team and will be participating this summer with the nation’s best beginning at the World Cup of Softball X in June in Irvine, California, before making the trip to Japan for the 2015 Japan Cup.

Bell then proceeded to go out and hit her 15th home run of the season and second of the weekend later that night to aid in the win, earning a new individual season high number while extending her all-time program lead to 41. She currently leads the team with a .474 batting average.

The swing of the day and the only person to earn multiple hits was fellow junior Sandra Simmons, who’s three-run home run in the third capped a five-run frame and helped give the offense the shot it needed to break out of its three-game slump. The Fountain Valley, California, native earned her ninth multi-hit game of the season and sixth game with multiple RBIs by going 2-for-3 with a double, as she is currently batting .302.

Although she suffered the loss in the series opener, Carley Hoover may have helped give the pitching staff the shot it needed as she pitched her fourth shutout of the season on Monday, striking out four and scattering four hits to earn her staff-leading 13th win of the season. That win helped silence a hot-hitting Mizzou squad that combined for 17 runs and 16 hits in the first two games alone.

The Tigers have been a nearly unflappable group at home, becoming the seventh team to have 30 wins at home in a season, while this week they will try to become the first team to surpass the 30-win plateau since 2006. That team won a program best 34 games that season, while the last team to do so came in 2010 when that group won 31.

Southeastern Louisiana comes into the series against LSU with a 20-25 overall record after splitting a doubleheader with Nicholls over the weekend. The Tigers are 19-1 all-time against the Lady Lions, earning that 19th win last season in Hammond with an 11-3 victory in six innings.