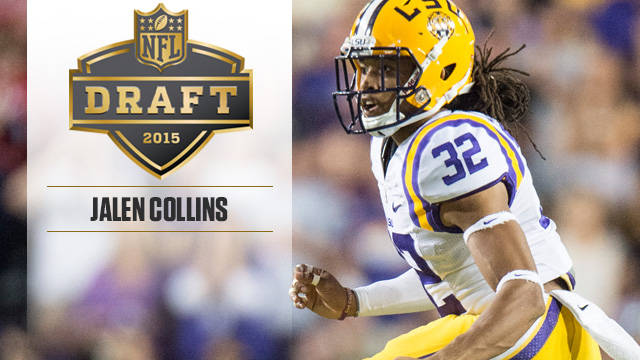 CHICAGO – The LSU football program had three of its defensive standouts in Jalen Collins, Danielle Hunter and Kwon Alexander along with running back Kenny Hilliard selected during the 2015 NFL Draft.

The four players brought LSU’s total to 64 which ranks second nationally during the Les Miles era and only behind USC since 2006.

Collins was the first LSU player off the board during Friday’s second round. The Atlanta Falcons used the 42nd pick on Collins.

Collins played in 39 games and was a key component of LSU’s secondary with seven of his 10 starts coming last season. He posted 38 tackles and a team-leading nine pass breakups in 2014. Collins collected a career-high six tackles during the Wisconsin and Alabama games in addition to five stops versus Notre Dame at the Music City Bowl. He secured an interception in the closing minutes of the fourth quarter at Texas A&M to secure LSU’s 23-17 victory.

The Minnesota Vikings traded up to select Hunter with the 88th pick during the third round.

Hunter started in 23 games at defensive end over his final two seasons for the Tigers. He finished fourth on the team with 73 tackles highlighted by 30 solo stops last season. Hunter paced LSU’s defense and ranked 10th in the SEC with 13.0 tackles for loss in 2014. He set a career-high with 12 tackles at Auburn and was the first LSU defensive lineman since Glenn Dorsey during the 2006 season to record double digit tackles in a game. Hunter scooped up and scored on a 25-yard fumble return to open the second half of the Mississippi State game.

Alexander was the 124th overall pick, 25th in the fourth round, by the Tampa Bay Buccaneers.

Alexander was a two-year starter for LSU at outside linebacker and earned All-SEC Second-Team accolades from ESPN.com and the Associated Press last season. He racked up a team-leading 90 tackles sparked by 7.5 tackles for loss and 1.5 sacks in 2014. Alexander posted 10-plus tackles in four games which included a season’s best 13 stops against Mississippi State and capped his career with 11 tackles versus Notre Dame at the Music City Bowl.

The Houston Texans drafted Hilliard with the 235th pick during the seventh round.

Hilliard, the nephew of former LSU and New Orleans Saints great Dalton Hilliard, amassed 1,547 yards and 27 touchdowns in his LSU career. The 27 rushing TDs are tied for eighth place in the LSU record book. He tallied a quartet of 100-yard rushing yards which included 93 of his 110 yards and a 28-yard TD which ended up being the game-winning score versus Wisconsin during the fourth quarter of LSU’s comeback 28-24 victory. He also scored a career-best three TDs against Georgia during the 2011 SEC Championship game.