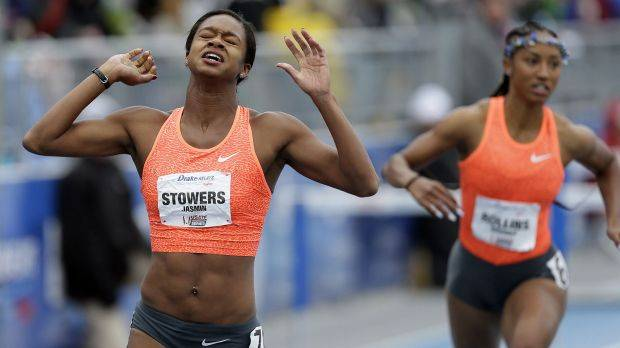 BATON ROUGE – Former Lady Tiger All-American Jasmin Stowers burst onto the international stage on a chilly Saturday afternoon in Des Moines, Iowa, when she hurdled to a world-leading time of 12.40 seconds in blitzing the field in the Women’s 100-Meter Hurdles Beijing World Championships Preview at the 106th Drake Relays held at Drake Stadium.

Perhaps an underdog to Dawn Harper-Nelson, the 2008 Olympic Champion and 2012 Olympic Silver Medalist, and Brianna Rollins, the reigning World Champion, when taking her mark at the start line in the event, LSU’s former hurdle star took flight in her first outdoor season as a professional with a resounding victory.

Running out of lane No. 7, Stowers fired out of the blocks and held steady with the rest of the field before taking the lead over the third hurdle of the race. She never looked back, surging ahead over both the seventh and eighth hurdles before extending her lead over the ninth and 10th hurdles to cross the finish line more than three tenths of a second ahead of her nearest competitors.

Stowers’ victory was sealed when her winning time of 12.40 flashed on the scoreboard ahead of Harper-Nelson (12.71) in second place, Kristi Castlin (12.72) in third place and Rollins (12.75) in fourth place.

In a race that was run with a legal tailwind of +1.5 meters per second, Stowers (12.40) smashed the previous Drake Relays meet record of 12.58 set by defending champion Castlin just one year ago. Her 12.40 is also the fastest hurdle time ever run this early in a season in the history of the sport, and makes Stowers the 12th-fastest hurdler in World history and the fifth-fastest American of all-time.

Rounding out the field were Queen Harrison (12.76) in fifth place, Sharika Nelvis (12.86) in sixth place, Tiffany Porter (12.90) in seventh place and Jacqueline Coward (13.20) in eighth place overall. Porter of Great Britain actually entered the race as the previous world leader in the event with a seasonal-best time of 12.56 before Stowers smashed it with her 12.40 on Saturday.

“I was definitely nervous. These are the top hurdlers in the world here, but I knew I had to remain focused and hit my start. Once I hit the start, I knew I had a good chance of winning,” Stowers shared in speaking with the media following her victory. “Once I crossed the finish line, I couldn’t believe I won, and the time I ran was crazy to see. Everyone out there are great competitors.”

It has already been an outstanding debut season as a professional for Stowers as she has already been crowned the 2015 USA Indoor Champion in the 60-meter hurdles this season with an indoor personal best.

The 2014 NCAA Outdoor Silver Medalist and former seven-time All-American and five-time SEC Champion in four seasons with the Lady Tigers from 2011-14, Stowers claimed her first career national championship with a PR of 7.84 in the final of the 60-meter hurdles at the USA Indoor Championships held at the Albuquerque (N.M.) Convention Center earlier this year. It was a performance made Stowers the second-fastest hurdler in the world rankings for the 2015 indoor season, trailing only the world-leading time of 7.83 run by Nelvis this season.

“It shows me that I can run well at World Trials and make the World (Championship) team, and possibly even the Olympics next year,” Stowers continued. “It’s kind of hard right now to sink in because I just ran it, but it is great, and I know I have a lot more to do at practice to get it down from there.”

Running her first race over the 400-meter hurdles in more than a month, Tate outlasted 2012 U.S. Olympian Georganne Moline over the finish line in a seasonal best of 55.68 to rank No. 3 in the 2015 World rankings this spring. Moline, formerly of the University of Arizona, finished runner-up to Tate in 55.74 in a tight finish between two former college rivals.

Tate actually took the tape in the end with a late charge as she went over the eighth hurdle in fifth place behind the likes of Tiffany Williams in first, T’Eara Brown in second, Moline in third and Lashinda Demus in fourth with little more than 100 meters to go. Tate powered into fourth past Demus after going over the ninth hurdle, and took advantage of a trip by Williams over the last hurdle to move two-personal battle with Moline for the title. The former Lady Tiger national champion overtook Moline in the end with a winning seasonal-best time of 55.68.

“Just coming down and clearing (the hurdles) to the best of my ability, and coming off the last hurdle, I just gave it all I had,” Tate said of the key to her finish when speaking with FloTrack.org following the event. “It’s a good confidence booster to come out here against these great ladies, a lot of them are Olympians. I’m just grateful to be able to compete with these ladies and come out with a victory.”