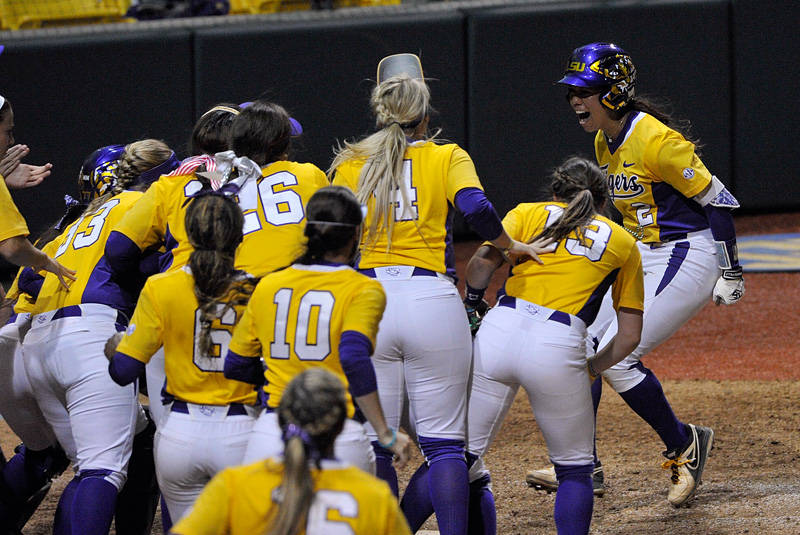 BATON ROUGE, La. – The No. 3 LSU softball team hits the road for the final time in the 2015 regular season this weekend, traveling to take on the No. 15 Missouri Tigers at University Field in Columbia this Saturday-Monday.

For the second consecutive week the Tigers will participate in the alternate weekend series schedule with first pitch slated for 2 p.m. Saturday, 3 p.m. Sunday and 6 p.m. Monday. The first two games of the series will be streamed online on SEC Network+, with Monday’s primetime clash set for the SEC Network with Adam Amin and Amanda Scarborough.

Fans can listen to all three games of the series on ESPN 104.5/9 locally in Baton Rouge or in the Geaux Zone with Patrick Wright, as the pregame show starts 15 minutes before first pitch.

Not since the early pre-conference schedule has LSU had a week go by without a midweek game, but it couldn’t have come at a better time for the Tigers as they enter what could be considered one of the more grueling parts of the season, as beginning this week the squad will play its final seven games over the course of the next nine days beginning with Missouri, before returning home to take on Southeastern Louisiana next Wednesday and an epic home finale against Auburn next weekend.

With just two weekends remaining before 11 visiting teams descend upon Tiger Park for the 2015 SEC Softball Tournament, the Tigers are in prime position to earn a high seed for the championship, sitting a half game behind Florida along with Auburn for the top spot in the regular season title race. The top four teams at the end of next Sunday will play on Thursday, as the eight below will all open the festivities on Wednesday with the opening round.

LSU is coming off of a 2-1 weekend that saw the team claim its fifth conference series of the season over the Texas A&M Aggies at home, a place where the team has racked up 30 of its 41 wins so far this season. With a true home field advantage, the Tigers are looking to complete the task of staring down postseason opponents in its own back yard, currently holding down the No. 2 RPI position and No. 3 in each of the major Top 25 polls with Selection Sunday just weeks away.

“I think everybody is proud of this team, proud of what they’ve been able to accomplish and has made the atmosphere really great this year,” head coach Beth Torina said. “Everyone has been great and the energy they bring is tremendous, and I hope they continue throughout the postseason and showing up big in those moments.”

The Tigers have won seven of their last 10 games overall going into the series, looking to improve its road record which stands at just 6-5. However, the team has been able to play its best when going against top-flight competition, earning 13 wins against ranked teams so far, the most since 2006.

Currently on a tear and putting up some career numbers through this latter half of the season has been junior catcher Kellsi Kloss. Currently on a 10-game hitting streak which is the longest for her career, the Cypress, California, native is hitting a career-best .353 at the plate in 2015, smashing her tenth home run of the year over the weekend to give LSU three double-digit home run producers for just the second time in program history along with teammates Bianka Bell and Sahvanna Jaquish.

Kloss, along with the rest of the middle and bottom of the order has only enhanced the overall team output for a squad hitting .352 collectively led by Bell’s .477 average and seven total starters hitting over .300.

Hours before the finale on Monday, the league honored pitcher Allie Walljasper with the SEC Freshman of the Week award for the second time this season after earning two wins last week in wins over McNeese State and A&M, allowing just two earned runs in 11 innings. Walljasper leads the LSU pitching staff with a 1.37 earned run average, while Carley Hoover’s 119 strikeouts is a staff-high.

As a group along with Baylee Corbello and Kelsee Selman, the Tigers have only given up 98 runs, with only 72 of those being earned. They’ve only issued 90 free passes with a .205 opponent batting average.

Although too young to be a true rivalry just yet, LSU and Missouri have had some exciting clashes in the recent series history, even before they joined the league in 2013. First was the Super Regional in Columbia in 2012 which the Tigers upset Missouri to go to the Women’s College World series, Missouri officially joining the league and taking two from three from LSU in Baton Rouge.

Just last year, LSU held nothing back in a 6-0 drubbing of Missouri in the SEC tournament at South Carolina, earning its first win in the tournament since 2010 while Mizzou was ranked No. 14 at the time. This will be the first series in Columbia with both as SEC members since that Super Regional, with Missouri on a hot streak after sweeping Arkansas on the road last weekend.

“Missouri has two very talented pitchers and I think we’ll have our work cut out for us,” Torina said. “Their offense is really solid and consistent. They run and can swing for power, so we’ll have to show up because we’re expecting a battle.”