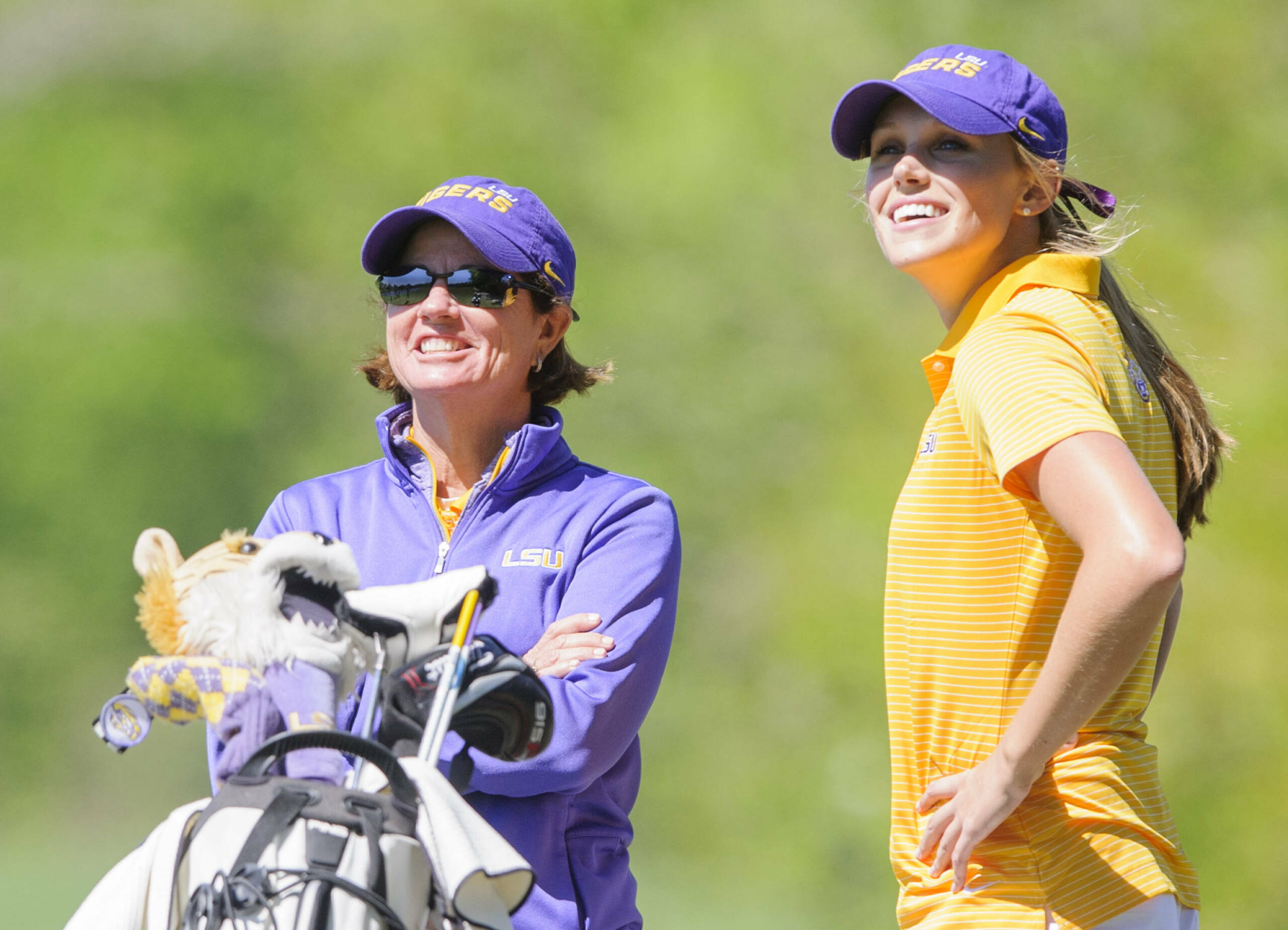 Editor’s Note: On Thursday evening, LSU women’s golf coach Karen Bahnsen will be inducted as part of the 2015 class for the Mobile Sports Hall of Fame at a dinner in Mobile. With this induction, Bahnsen becomes part of the first mother-daughter combination to go in to the Hall of Fame. Her mother, June Mayson, a champion golfer in her own right, was inducted in 1999. Bahnsen grew up in Mobile, played at McGill-Toolen High School, and was the first recruit of the new LSU women’s golf program prior to the 1979-80 season. She is now in her 31st season as the LSU women’s golf program’s Head Coach and has the Lady Tigers ranked in the top seven in the country in two major performance polls and heading to its 21st NCAA regional tournament May 7-9. Thanks to the Mobile Hall of Fame and Al.com, here is their story about inductee Karen Bahnsen.

Courtesy of AL.com and the Mobile Press Register

MOBILE, Ala. — The Mobile Sports Hall of Fame will induct the class of 2015 this evening. Karen Bahnsen is one of the members of the newest class.

A regular day for Karen Bahnsen is pretty much like so many other wives. A little shopping. Maybe a trip to the grocery. Cook dinner. All crunched in and around work. You know, regular kind of stuff.

What is completely un-regular about Bahnsen’s day, though, happens when she turns attention to her true passion: transforming young ladies into world-class champion golfers.

“I’m about as normal as anybody can be,” said Mobile native Bahnsen, who for the last 31 years has been head coach of LSU’s astoundingly successful women’s golf team. “There’s more to life than golf, but I do love what do.”

That love for what she does has earned the former McGill-Toolen star a place in the 2015 Class of the Mobile Sports Hall of Fame.

She will be formally inducted during this year’s MSHOF banquet on April 23 at the RSA Battle House.

Her success in Baton Rouge reads like a fairy tale of unparalleled proportions:

And this woman still has time to be a wife and mother?

“That’s the best part,” she says with laugh. “I love family.”

The 1984 grad and first woman to ever receive a golf scholarship to LSU is the wife of Tigers’ Associate Athletic Director David “Bo” Bahnsen. They have children, Darren (26) and Devin (23).

She credits what she’s been able to accomplish in her home and on the links to a great foundation laid for her in Mobile a long time ago.

“I was raised with a strong influence from my mom. I had a great relationship with both her and dad,” she said.

Her mother, June Buckholtz-Mayson, was herself an Alabama women’s golf champion, former women’s head golf coach at the University of South Alabama and is also a member of the Mobile Sports Hall of Fame.

“I learned from her early on not to be goal-oriented, but simply worry about what you can control.”

Bahnsen controlled the girls high school golf circuit during much of her time at McGill, and in 1979 was not only state champion, but also national high school champion.

She took that championship pedigree with her to LSU and was a driving force in the development of several young women.

Jenny Lidback, the No. 1 player in college golf in 1986 and winner of a record seven tournaments in one year. She went on to win an LPGA Major and was the first women’s golfer in the LSU Athletic Hall of Fame.
Jackie Gallagher-Smith played for LSU in the 1980s and had a long, steady career on the LPGA Tour that included an LPGA victory.
Ashley Winn, Michelle Louviere and Laura Moore led LSU to a series of NCAA appearances, a No. 1 ranking and 9 tournament titles.

How does Bahnsen do it?

“There is no such thing as a secret weapon,” she says. “We run the program like a family and I delegate a lot. They have their own swing coaches, but I’m just like a second set of eyes.”

Just another set of eyes? A normal person?

Karen Bahnsen is anything but.