Four Tigers to See Off at PGA TOUR's Zurich Classic 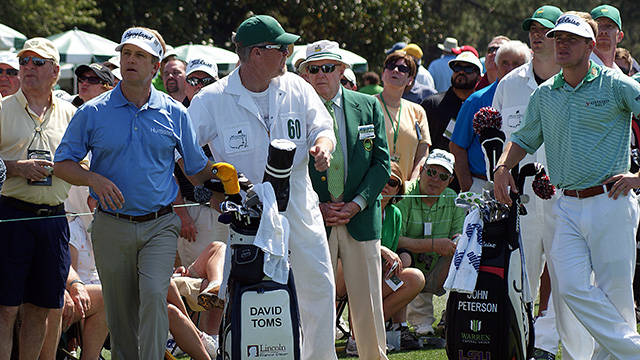 BATON ROUGE – A sprinkling of purple and gold can be seen in the field at the PGA TOUR’s Zurich Classic of New Orleans this weekend as four Tiger alums will take to the course at the TPC Louisiana for the event with former All-Americans David Toms, John Peterson, Andrew Loupe and Curtis Thompson teeing off in Thursday’s opening round.

Thompson, a PING and Golfweek Honorable Mention All-American in his final season in Baton Rouge a year ago, will be the first Tiger on the course as he tees off from No. 10 at 8:50 a.m. CT.

Thompson made his PGA TOUR debut earlier this season when he appeared in the field at the Sony Open in Hawaii that was held Jan. 15-18. A rookie on the Web.com Tour, Thompson also claimed his first professional top-10 finish in his tour debut at the Panama Claro Championship in February before cracking the Top 20 by tying for 13th place at the Cartagena de Indias in March.

Loupe is set to make his seventh start on the PGA TOUR this season when he tees off from the first tee at 9 a.m. CT in Thursday’s opening round. He has made the cut in three of his previous six appearances, earning a seasonal-best finish of a tie for 41st place at The McGladrey Classic in his 2014-15 season debut back in October.

Toms, a 13-time tournament winner and the 2001 PGA Champion during his illustrious career on the PGA TOUR, joined Loupe in the field for The McGladrey Classic where he broke into the Top 20 overall in a tie for 13th place on the final leaderboard before earning his first Top 10 of the PGA TOUR season at the Sanderson Farms Championship where he tied for ninth place. Toms will tee off from hole No. 1 at 12:50 p.m. CT.

Peterson is enjoying his best season on the PGA TOUR since leaving Baton Rouge following the 2010-11 season as he has made the cut in 13 of his 14 PGA TOUR appearances in 2014-15, earning his single-season career high of $594,447 to-date. He has earned four top-20 finishes on the year, including each of his last two events by tying for 11th place at the Valero Texas Open and tying for 18th place at the RBC Heritage.

The 2011 NCAA Champion and former three-time All-American during his career at LSU will be the last Tiger to take to the course when he tees off in Thursday’s opening round at 1:30 p.m. CT from the first tee.