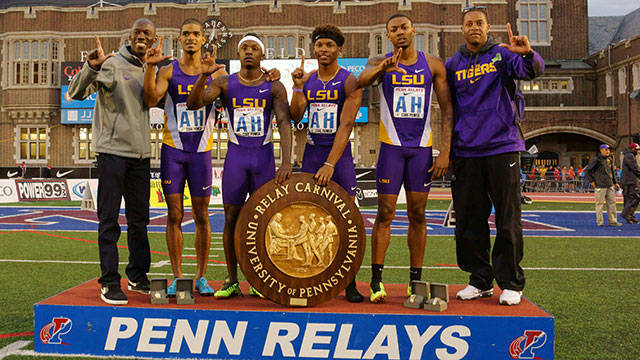 BATON ROUGE – With the end of the 2015 regular season and the dawn of the championship season now in sight, the LSU Track & Field teams will make their annual trip to historic Franklin Field in Philadelphia this weekend to compete in the 121st running of the Penn Relay Carnival as they will line up for the first time on Thursday at the University of Pennsylvania.

NBC Sports Network will televise Saturday’s “USA vs. The World” events at the Penn Relays live from 11:30 a.m.-2 p.m. CT as part of the 2015 USA Track & Field Championship Series. Flotrack will provide live streaming video of all events on the track not featured during NBC Sports Network’s “USA vs. The World” broadcast through its “Flo Pro” premium service at www.flotrack.org.

The 121st Penn Relays will come to an end Saturday afternoon with the running of the Championship of America 4×400-meter relays as the Lady Tigers will run at 4:50 p.m. CT followed by the Tigers at 5 p.m.

LSU is among the most successful programs all-time at the Penn Relays as the Tigers and Lady Tigers are winners of 68 Championship of America relay titles and 66 individual event titles in the meet’s history. LSU’s Lady Tigers are by far the most successful women’s program in meet history with a total of 45 Championship of America relay wins all-time at the Penn Relays.

LSU is looking to continue an impressive streak as either the men’s or women’s team has won at least one Championship of America relay title in 24-straight seasons dating back to the 1991 season. The Tigers captured the men’s sprint medley relay a year ago to extend LSU’s streak to 23 years in a row as they have won the event three times in seven years at the Penn Relays, including others wins in 2008 and 2010.

Two LSU athletes made history while winning their events in the University division at the Penn Relays a season ago when former Lady Tiger All-American Jasmin Stowers broke 13 seconds to win her third career sprint hurdles title at the Penn Relays and Tiger senior Rodney Brown set the Penn Relays meet record and a new LSU school record to take the men’s discus throw to highlight his junior season.

Brown was honored as the College Men’s Individual Athlete of the Meet award winner when he smashed the meet record with a throw of 210-10 to become the third LSU Tiger all-time and the first since Alex Forst for the 2000 season to win the men’s discus title at the Penn Relays. His winning mark of 210-10 also eclipsed the 25-year-old school record of 209-1 set by LSU’s former NCAA Champion John Nichols in 1989.

Brown returns to defend his Penn Relays title this weekend as the NCAA’s leading discus thrower in 2015 as he owns a seasonal-best mark of 209-8 set in a victory at the 88th Clyde Littlefield Texas Relays in March.

Stowers’ victory in the women’s 100-meter hurdles with a time of 12.99 in the 2014 final marked the ninth time in program history that a Lady Tiger has won the sprint hurdles in the University division at the Penn Relay Carnival. She actually made history as the only hurdler in meet history to win the event three times at the Penn Relays, surpassing the two titles earned by Arizona State’s Lynda Tolbert (1988, 1990), Pittsburgh’s Allison Williams (1993, 1994) and Texas A&M’s Anjanette Kirkland (1995, 1997).

The Tigers also feature the reigning Men’s NCAA Division I National Athlete of the Week as they make the trip to the Penn Relays this weekend after senior sprint star Vernon Norwood clocked a season-opening 44.44 to win the 400-meter title at the LSU Alumni Gold on Saturday. The 2015 NCAA Indoor Champion ran the fastest 400 meters in collegiate history in the month of April and became the ninth-fastest collegian to line up on the oval outdoors in NCAA history with his season-opening performance in Baton Rouge this past weekend.

LSU’s athletes have certainly earned their share of recognition with their efforts at the Penn Relays over the years as 10 athletes have taken home a coveted Athlete of the Meet honor with their performance.

In fact, LSU has seen five athletes honored in just the last seven seasons alone as Brown took home the title of College Men’s Individual Athlete of the Meet award a season ago in the wake of his school-record setting and meet-record setting performance in the discus throw. After throwing 210-10 to win the 2014 Penn Relays title in the event, he later raised his school record to 212-2 during the summer.

After competing at the 121st Penn Relays this weekend, the Tigers and Lady Tigers will wrap up their 2015 regular season next week when they play host to the second-annual LSU Invitational as they welcome the likes of Auburn, Florida, Miami and Ole Miss to Baton Rouge for a five-team scored meet being held on May 2, at the Bernie Moore Track Stadium.