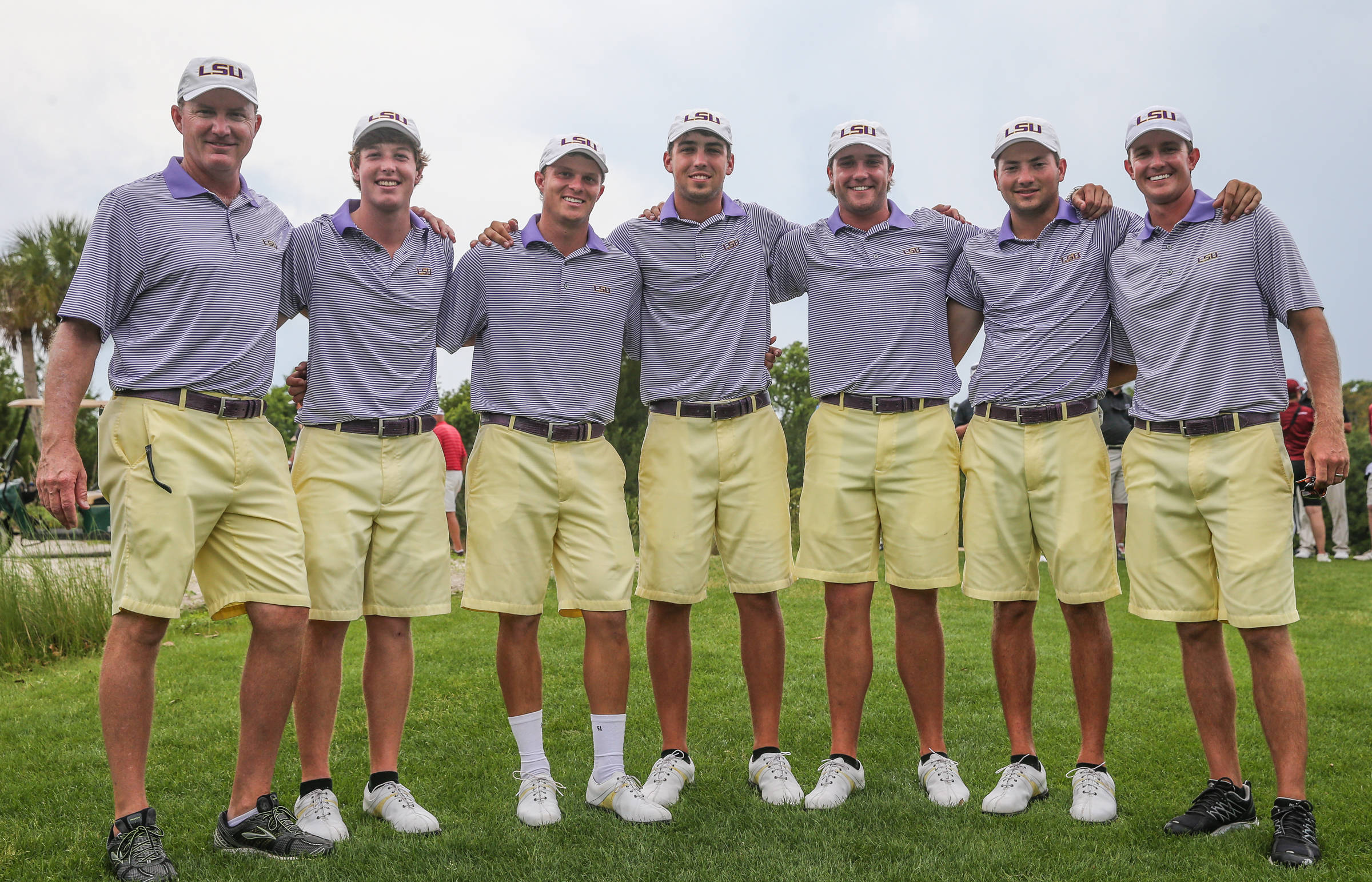 BATON ROUGE – After being crowned the 2015 SEC Champions with a three-shot victory in Sunday’s final round at the SEC Men’s Golf Championships this weekend, the LSU Tigers have been honored as Golfweek’s National Team of the Week in the wake of winning their first conference title since 1987 and the 16th SEC crown in program history.

The Tigers have earned the title of Golfweek’s National Team of the Week for the first time in four years since they were last honored on April 5, 2011. That week, they picked up two tournament wins ahead of their appearance at the SEC Championships that season as winners of the Hootie at Bulls Bay Intercollegiate and LSU National Invitational in successive starts.

Not since the sophomore season of the great David Toms in 1986-87 had the Tigers been crowned SEC Champions on the links, but the team of seniors Stewart Jolly and Ben Taylor, junior Zach Wright and sophomores Brandon Pierce and Eric Ricard earned their place in history as the SEC Champions for the 2014-15 season.

They claimed the 16th SEC Championship in the program’s history to rank second all-time behind the 26 titles won by the Georgia Bulldogs while snapping Alabama’s run of three-straight wins from 2012-14.

With Jolly leading the way with a 1-under par 69, Taylor and Wright both firing matching scores of even-par 70 and Pierce adding a 2-over par 72 toward LSU’s team score in the final round, the Tigers took home the title with a total of 1-over 281 in the final round and winning effort of 13-under 827 in 54 holes played at the Seaside Course. The No. 5-ranked Commodores and No. 6-ranked South Carolina Gamecocks trailed three back in a tie for second place at 10-under 830 as each ended with an even-par 280 in the final round.

Rounding out the Top 5 of the final team standings as this year’s SEC Men’s Golf Championships were 15th-ranked Auburn and 25th-ranked Alabama in a tie for fourth place at 7-under par 833.

Jolly proved to be a catalyst in LSU’s charge on the back nine as he was the only Tiger to break par in the final round, firing a 1-under 69 on Sunday to tie for fourth place overall at 5-under par 205 for the weekend.

Jolly was among three Tigers to break into the Top 10 of the final leaderboard following Sunday’s final round at the SEC Championships as Wright followed in a tie for sixth place at 4-under par 206 to claim his best finish in three career appearances and Pierce wrapped up the weekend in a tie for ninth place at 3-under par 207 while making his championship debut with the Tigers.

After firing the lowest round of the weekend for the Tigers with his 4-under 66 on Saturday, Wright closed out a top-10 finish with two birdies and two bogeys for an even-par round of 70 on Sunday to improve his two prior finishes of tying for 36th place at the SEC Championships as a freshman in 2013 and as a sophomore in 2014. Pierce’s 2-over 72 was the final counting score for the Tigers in securing the team title.

Both Taylor and Ricard tied one another for 31st place on the final leaderboard with matching tournament scores of 3-over par 213 for the championship. Like Wright, Taylor canceled out two birdies with two bogeys for an even-par 70 in the final round to match Saturday’s output after opening the tournament with a 3-over par 73 in Friday’s first round.

While making his SEC Championship debut alongside Pierce, Ricard counted a score of 1-under 69 on Friday before adding rounds of 1-over 71 on Saturday and 3-over 73 on Sunday to finish the event at 3-over 213.

Their victory at the 2015 SEC Men’s Golf Championships marked the fourth time during the 2014-15 season that the Tigers have been crowned team champions in their 10 tournament starts on the year. They have also claimed team titles at the Golfweek Conference Challenge (Sept. 14-16) and David Toms Intercollegiate (Oct. 4-5) in the 2014 fall season and the Talis Park Challenge (March 15-16) earlier this spring.

It also marks the sixth time in program history and the first time since 2010-11 that the Tigers have won four tournament titles in a single season. They have now claimed 21 team titles in Winstead’s 10 seasons.

With their 16th SEC Championship now in the history books, the Tigers will await their eighth-straight NCAA Regional selection as the field for the 2015 NCAA Men’s Golf Regionals will be announced in just over two weeks on Monday, May 4, from 9-10 a.m. CT on Golf Channel’s Morning Drive program. The 2014 NCAA match play semifinalists look to qualify for the 30-team field at the NCAA Division I Men’s Golf Championships for the fifth time in six seasons by earning a top-five team finish in NCAA Regional competition.