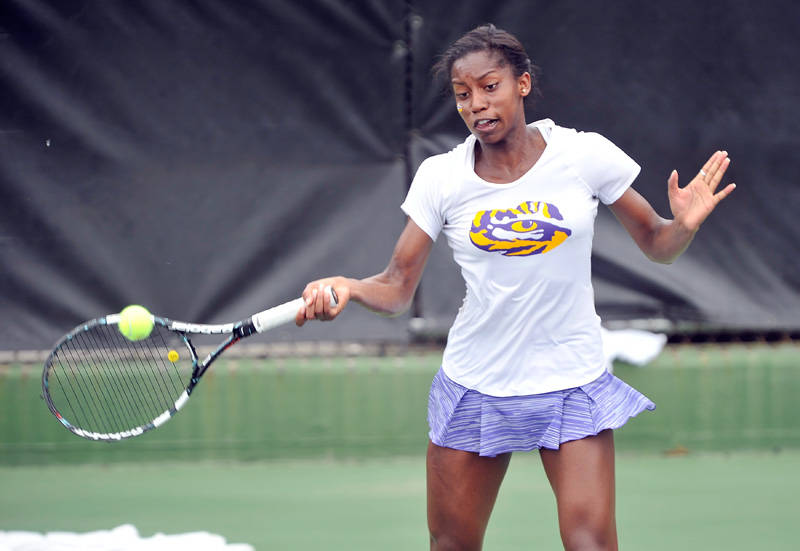 COLUMBIA, S.C. — Sophomore Skylar Holloway was named to the SEC All-Tournament Team after her come-from-behind win that clinched the Lady Tigers’ 4-3 win over No. 7 Texas A&M and a berth into just the third semifinal in school history.

The Washington, D.C. native was down 5-2 in the third set with elimination in the SEC Tournament hanging in the balance, Holloway reeled off four of five games to push the match into a winner-take all tiebreaker. Holloway trailed trailing 4-3 in the tiebreaker and won four straight points to seal the semifinal berth 7-6 (8-6), 1-6, 7-6 (7-4).

Holloway became the first Lady Tiger to be named to the team after finishing the tournament with a 2-1 record in singles play. Holloway also defeated Brittany Lashway 6-2, 6-4 in LSU’s win over Missouri in the second round of the tournament.

The win by Holloway secured the program’s highest win over a ranked opponent since the 2000 season. It was also the first top-10 win under third-year head coach Julia Sell.

The Lady Tigers await their 2015 NCAA Tournament destination. The bracket will be announced Tuesday, April 28 at 5 p.m. on NCAA.com