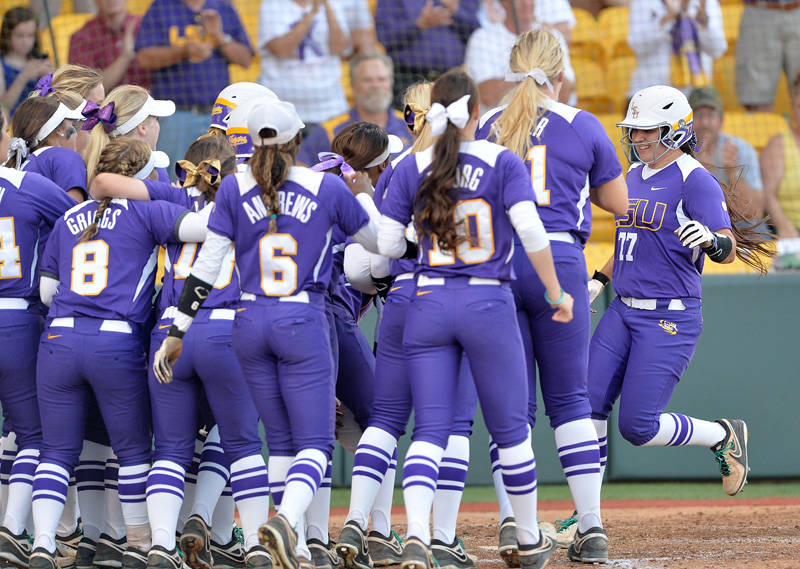 BATON ROUGE, La. – Looking to claim its fifth Southeastern Conference series of the year after winning on Saturday, the No. 3 LSU softball team scored in each of the first four innings, while holding off multiple rallies by the visiting No. 24 Texas A&M Aggies late to record a 6-3 victory Sunday night at Tiger Park in Baton Rouge.

Holding a four run lead with three innings remaining, LSU (41-5, 13-4 Southeastern) withstood two consecutive comeback attempts from TAMU (33-14, 8-9) in the fifth and sixth with multiple runners on base, allowing just one run over that span as the Aggies stranded seven runners on Sunday after leaving eight on Saturday. The Tigers only scored multiple runs in one frame, plating three in the third, while Texas A&M earned only one in the second, fourth and sixth.

Freshman outfielder Emily Griggs was the only LSU player to earn multiple hits on the night, but was one of seven players in the lineup to garner at least one. Griggs went 2-for-2 with an RBI and run scored, while Bailey Landry drove in three with a triple mixed in and Kellsi Kloss earning her 10th home run of the season to go 1-for-3 with an RBI and run scored, and extending her career-record hitting streak to nine games.

“I’m telling myself to be very patient, and just wait for a pitch that I know I can handle,” Kloss said. “I guess at the beginning of the season I just got a little impatient and anxious and was trying to swing out my shoes on pitches that weren’t really mine. Right now I just feel like I’m seeing the ball really well.”

Earning her 12th win and 11th complete-game effort of the season, Allie Walljasper (12-2) turned it on when the stakes were at their greatest, earning the win by allowing three runs, two earned, on nine hits with four strikeouts to just one walk. The freshman, who is also a candidate for the national freshman of the year award, tossed 130 pitches, 87 for strikes.

“I was focusing on hitting my spots really well and relying on my defense. Our defense was really good all game,” Walljasper said. “Knowing that, I just needed to pitch ground balls, and I had my defense at my back the whole time.”

Katie Marks (12-2) suffered the loss, allowing four runs on five hits with a walk and a strikeout in two innings. The Aggies tossed three pitchers in the contest, with all three seeing no more than two innings of work as Lauren Ainsley pitched two and allowed two runs on two hits, while Kayla Ober allowed just one. Breanna Dozier and Ashley Walters had two of A&M’s nine hits on the night, with each having an RBI.

After drawing a full count, A.J. Andrews led off the LSU inning with a walk to reach first. After stealing second base and now with one out on the board, Bianka Bell also went long into the count, seeing a host of pitches before looping one into short right center to score the LSU outfielder to give LSU a 1-0 lead.

The Aggies came back in the top of the second, as the visitors got two hits that put runners at the corners, but with two outs it looked like LSU was going to get out of the inning without giving up a run, but on a bunt to third, the ball came out of the glove on the back end, allowing the tying run to cross on the error to knot the game at 1-1.

A single by Sandra Simmons up the middle of the defense opened the LSU second for the Tigers, as Jenna Kreamer hit a dribbler through the right side to put two on for the home team. After a fly out to right, a wild pitch advanced the runners to second and third, as Griggs chopped one through to score Simmons from third to make it 2-1 with runners now on the corners.

Griggs would wind up stealing second base, and it just limited her total steps home as Landry skied one to the warning track in deep center, garnering a triple to bring in two to give LSU a 4-1 lead.

With an out in the third, Kloss reared back and took the first pitch of her at-bat to the highest point on the berm in left for the solo home run to put LSU up 5-1 over the Aggies.

Texas A&M got one back via a solo home run from Dozier in the top of the fourth, cutting LSU’s lead to just three at 5-2.

Constance Quinn reached base after an error at first to open the bottom of the fourth. After stealing second, Griggs earned an infield single, keeping Quinn at second to put two on for the Tigers. A sharp liner to second looked to be a double play ball for the Aggies, but the resulting throw to first was low and allowed Quinn to move to third on the error. Landry chopped one to short, turning home to throw out Quinn but she slid in safe under the tag on the fielder’s choice to make it 6-2 LSU.

TAMU threatened again in the top of the fifth, as consecutive singles put two quickly on for the Aggies. A deep fly to center allowed the runner at second to tag up to put runners at the corners for the first out. Kreamer made a diving, run-saving stop at third, throwing out the runner at first for the second out, but putting two in scoring position for Texas A&M. A walk loaded the bases for the visitors, but Walljasper used an over-the-head reaching grab on a weak fly to end the threat.

The Aggies weren’t done putting the pressure on LSU, as after two singles to open the sixth was followed by a double to plate one cutting the team’s lead to 6-3 with two runners in scoring position. Walljasper came back with a strikeout, then a grounder to short to keep the runners at bay, with a grounder to third ending the frame on the third-straight out.

A&M would get a runner on with a single in the opening at-bat of the final frame, but a strikeout and a bang-bang double play by Kreamer to Simmons at first ended the game to clinch the win for the Tigers.

“I liked how Allie continued to fight throughout the game. I was really impressed with how she continued to do that,” Torina said. “I thought she battled and they did a good job too with their offense making some adjustments. Allie just continued to battle and let her defense play and they were able to keep us in the game.”

LSU goes for the series sweep of the Aggies at 6 p.m. Monday at Tiger Park. The game will be televised on the SEC Network.