Teal, Texas A&M on Tap for Softball This Weekend 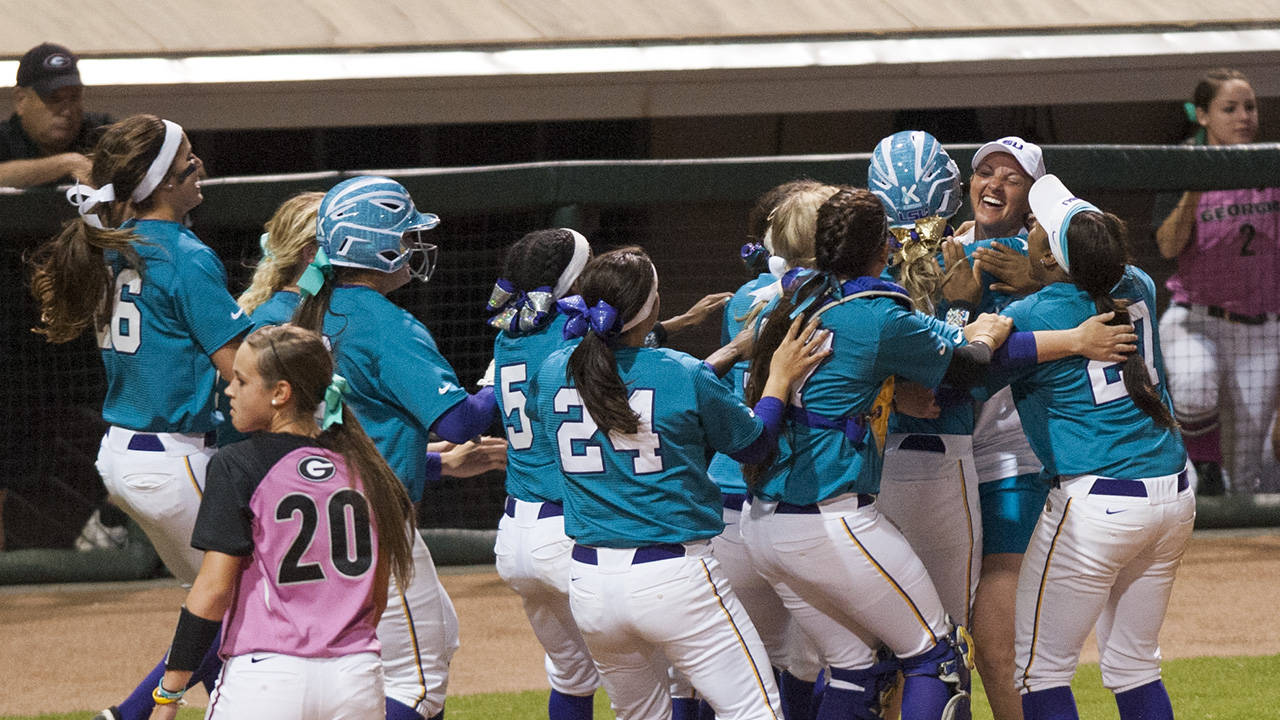 BATON ROUGE, La. – The No. 3 LSU softball team returns home after more than a week away to host the No. 24 Texas A&M Aggies for a three-game series beginning on Saturday evening at Tiger Park in Baton Rouge.

The series opener for both teams on Saturday will be streamed live on SEC Network+ through WatchESPN. Games two and three on Sunday and Monday will both be televised live on the SEC Network with Adam Amin and Amanda Scarborough. The radio home of LSU softball on ESPN 104.5/9 will carry all three contests and every contest for the remainder of the season locally in Baton Rouge and in the Geaux Zone on LSUsports.net.

It’s one of the biggest weekends of the year for the Tigers, as Saturday is the fourth-annual “Strikeout Ovarian Cancer” game, following the third-annual Geaux Teal walk earlier that morning. Nearly 700 people have signed up and donated to walk in the event that raises money for local women battling ovarian and other GYN cancers that morning, as fans are encouraged to wear teal to the game later that night and pay just $2 for general admission, with the first 1,000 fans through the Tiger Park gates receiving a “Strikeout Ovarian Cancer” roller banner.

On Sunday, the team will have its annual “Bark in the Park” day, where fans can bring their dogs out to the park. There will be $1 hot dogs at the concession stands at the field, as fans who bring a dog toy or other item can get in the game for just $2, with dog-themed promotions throughout the night.

Monday is the annual “Gold Game”, with fans wearing anything gold receiving entry for $2, as it is also a Tiger and Student Point night. The game will also start a week of appreciation for the various student workers around campus, as the athletic department will honor theirs with a pizza party on one of the decks for those who signed up prior to the weekend. The giveaway for that night will be gold LSU softball koozies.

When the season started in February, the team was hoping to show its growth from a 2014 year filled with youth and promise, to one of capitalizing on the talent it acquired to get into a position of playing for something meaningful by the end of the year. With three weeks remaining in the season at 39-5 overall and 11-4 in the SEC, LSU is one game back of first place in the league standings, while hoping to hold on to its solid RPI ranking at No. 2 to possibly have the road to Oklahoma City run through the Red Stick.

With 10 games left, nine against league opponents and current Top 25 teams, the Tigers are using the last days of the regular season reflecting on their historic accomplishments, while remaining focused on what lies ahead in the coming weeks.

“When you’re enjoying something it seems to go by quickly, and I’ve really enjoyed this group particularly because we have a group of really great kids,” head coach Beth Torina said. “They’ve done some exceptional things and it’s been a historic season. Hopefully we have some more history to make in front of us.”

The Tigers are coming off of a solid, 13-4 win over the McNeese State Cowgirls on Wednesday to end their longest road trip of the season with a victory in Lake Charles, their third during the five-game stretch. LSU will just have one more remaining non-conference regular season game against Southeastern Louisiana in two weeks at home, their final against a Louisiana school as well.

LSU had been searching to put a complete, balanced offensive effort together again after their raucous start to the season, getting that on a 12-hit team performance and scoring all 13 of their runs in just three innings. LSU has not lost this year when scoring double-digit runs in a game, while falling only once in 19 games when earning double-digit hits. The Cowgirls had no answer, even after attaining a 2-0 lead on some defensive Tiger miscues, being held to just two hits in the game.

The usual names came through offensively, as Bailey Landry, Bianka Bell, Sahvanna Jaquish and Sandra Simmons each had two hits for the team, but the show-stopper came in the second-to-last frame from the bat of Alayna Falcon.

In her seventh career start, Falcon drew a walk before grounding out to first to drive in a run. With the bases loaded and a 3-2 count in the fourth, she blasted one over the scoreboard in left, capping her night with a new career-high five RBIs and two runs scored. Along with that, Taylor Lockwood earned her first collegiate hit, while Kailey McCasland took to the designated player role and got a hit and run scored to complete the total team effort.

Allie Walljasper earned the win by allowing one hit and two unearned runs in four innings to improve to 11-2 on the season, while Baylee Corbello came on in relief to pitch in front of the hometown faithful and allowed just two runs on one hit. The pitching staff as a whole comes into the weekend with a 1.68 earned run average which is still one of the lowest in the league.

The Aggies come into the weekend after defeating the Lamar Cardinals 13-0 in five innings in their midweek contest, while dropping two of three to Auburn at home last weekend. Texas A&M is batting .286 as a team with a 3.17 earned run average, led by mostly underclassmen that has carried the group to 33 wins so far this year.

It’s the first meeting as SEC counterparts in Baton Rouge for both sides, as LSU holds a 6-3 advantage in all-time meetings after taking two of three in College Station back in 2013.