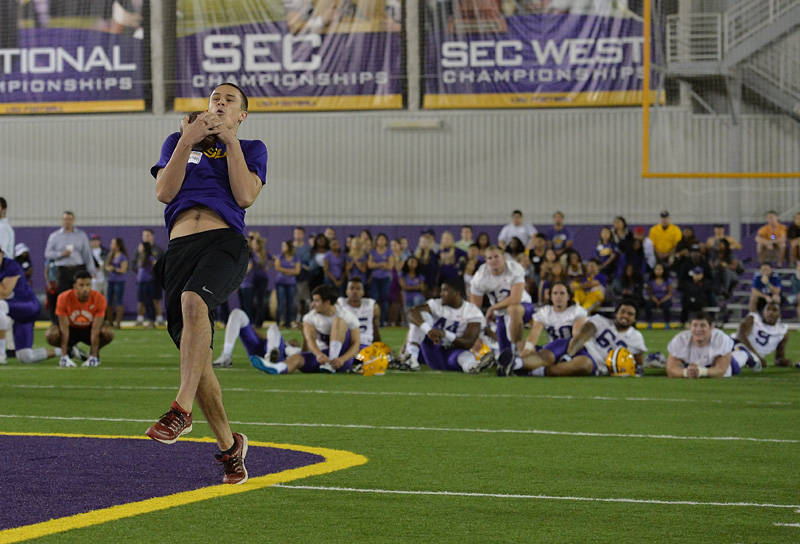 Despite the rain, over 300 LSU students watched the Tigers go through and shorts and helmet workout. The Tigers used a portion of Thursday’s practice to prepare the Purple and White teams for Saturday’s spring game.

The SEC Network, along with former Tiger great Marcus Spears and studio host and Baton Rouge native Peter Burns, were on hand on Thursday for an inside look at the LSU football program.

Following Thursday’s workout, head coach Les Miles with help from several players, put the LSU students through a series of drills to conclude the day. The drills included the passing gauntlet with quarterbacks Anthony Jennings and Brandon Harris, fielding punts, the passing tree, and an obstacle course.

“This was a lot of fun,” Miles said. “We had a productive practice and then wrapped it up by having some fun with the students. I think the players enjoyed having their fellow students come out and watch practice. A day like today gives the students who came out to watch a glimpse inside of what goes on at a football practice. I think everyone had a good time.”

After practice, the players and Miles signed autographs and took pictures with students.

LSU wraps up spring drills on Saturday at 1 p.m. in Tiger Stadium with the annual National L-Club Spring Game. Admission to the game is free.

The spring game will be game-like in the first half with a running clock in the second half. The roster breakdown for the Purple and White teams will be released on Friday morning.