After Break, Football Back to Spring Work 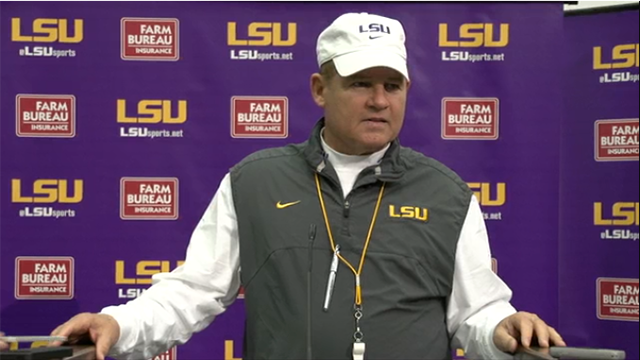 BATON ROUGE – The LSU football team got back to work after a 10-day spring break layoff on Tuesday as the Tigers held their 13th workout of spring drills here at the Charles McClendon Practice Facility.

The Tigers have two practices remaining this spring, one on Thursday in shorts and helmets followed by the National L-Club Spring Game at 1 p.m. on Saturday in Tiger Stadium. Admission to the spring game is free and will be preceded by the Rock N’ Roar Block Party at 11 a.m. on North Stadium Drive on Saturday.

“(Today’s) practice certainly wasn’t a perfect practice after a 10 day break, yet there was some real improvement,” LSU coach Les Miles said. “I think we are improving. What has to come is our second team guys going onto the field and playing big roles. That is what we are really looking at. We like our first team. Our first team is good on offense, defense and special teams. We just need to build up some depth that allows us to substitute the same style of performance from the first-team even though he might be a little younger.”

After opening Tuesday’s practice with a walk-thru and special teams, Miles immediately went to contact as he put the Tigers through the popular Big Cat Drill, the one-on-one exercise that pits an offensive player against a defensive player.

“We had a long Big Cat drill which was fun to watch,” Miles said. “The players really got after it and had some sincere contact on both sides. It was a great way to get this last week of spring ball started.”

As far as Saturday is concerned, Miles said that he and the staff haven’t decided how to split the teams for the spring game, but the format will be game-like in the first half with a running clock in the second half. Miles said the Tigers will also work on all phases of special teams, however that portion of the game will not be “live”.

“We have yet to decide if it will be 1s vs. 1s or 2s vs. 2s,” Miles said. “We will make that decision based on our players’ health and the matchup against the No. 1 defense and offense and the 2s to make sure it will be competitive. It will be interesting to see how things go.”

No matter how the teams are split, one area that that Tigers will be looking at will be the play of quarterbacks Anthony Jennings and Brandon Harris. Miles said that both players will split reps with the first team offense on Saturday.

“We just want to see them run the team and use the tools at hand,” Miles said of Jennings and Harris. “We want them to run the offense for us, let it work, take care of the ball and move it aggressively. All of those things.”

As the Tigers wind down the final week of spring, Miles is pleased with the progress the Tigers have made.

“There are some things I would like to see done better,” Miles said. “For example, our scrimmage before we left for break. I thought there were plays that were not perfect. Those things wear on me, but that’s the way it always is. I like this team. This team works hard. They improve. They’re talented. If they do the right things and continue down this path, we will be a really good football team.”