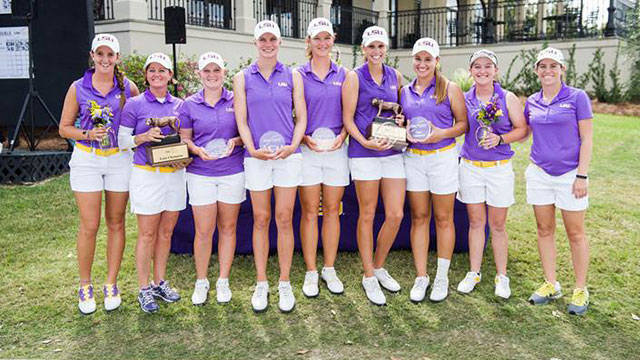 BATON ROUGE – The LSU women’s golf team heads to Birmingham Wednesday for the 2015 edition of the Southeastern Conference Women’s Golf Championship with three players ranked in the top 20 golfers in the country.

The SEC Tournament will be played for the third straight year at the Greystone Golf and Country Club, but for the first time on the Legacy Course.

Entering the event in the latest Golfweek/Sagarin Performance Rankings, LSU senior Madelene Sagstrom remains No. 2 in the country behind only Leona McGuire of Duke. Sagstrom has posted a 38-14-7 record against Golfweek’s top 25 players and 58-20-8 versus the Top 50. She is also on the watch list of Golfweek for the Annika Award which will be presented at the end of the season and she is also second in the Golfstat Cup standings.

Sophomore Caroline Nistrup is ranked 15th in the nation and she also has a positive record against the top 25 of 30-26-3. Nistrup is No. 17 in the Golfstat Cup rankings.

Junior Elise Bradley is ranked 19th presently in the Golfweek rankings, posting a 92-68-11 mark against the top 100 players in the country. She is 23rd in the Golfstat Cup rankings.

In all, eight SEC golfers are in the nation’s top 20 in the Golfweek rankings.

As a team, LSU is remains No. 6 in the rankings going to the tournament, and the No. 2 team in the performances charts behind only South Carolina which is at No. 5. LSU is an impressive 28-12-1 against the top 25 teams in the country with three team wins this year and 61-19-1 versus the top 50.

Washington, Southern Cal, UCLA and Duke are the teams ahead of South Carolina and LSU presently with Arizona, Arkansas, Mississippi State and Oklahoma State rounding out the top 10.

The SEC championship is scheduled to begin on Friday and run through Sunday.