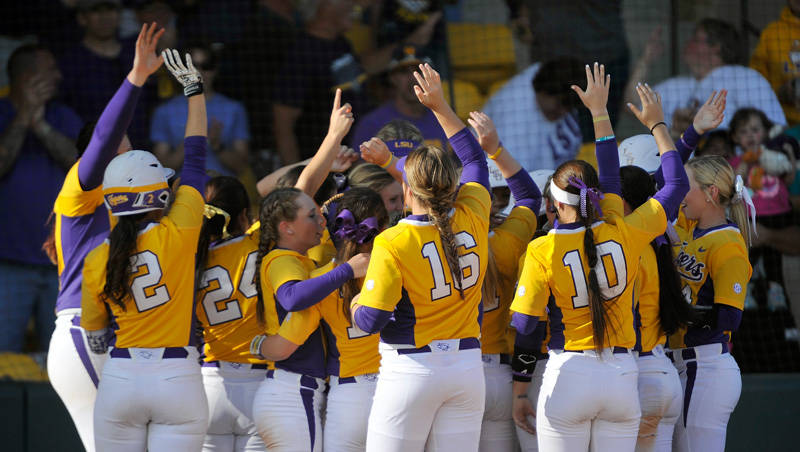 BATON ROUGE, La. – Due to inclement weather that has plagued the South for much of this week, the originally scheduled doubleheader between the No. 3 LSU Tigers softball team and the McNeese State Cowgirls on Wednesday has been changed to a single game with first pitch scheduled for 6 p.m. at Cowgirl Diamond in Lake Charles.

With scattered showers predicted at various points throughout the day, McNeese and LSU officials opted to play just one game instead of two, pushing back the start time in the hopes of getting at least one played in the only midweek game for both sides this week.

Cox Sports Television will still broadcast the contest, with a live stream available on ESPN3 to fans outside of the CST broadcast coverage map.

Stay tuned to LSUsports.net for further updates as well as the team’s social media pages on Facebook and Twitter.

BATON ROUGE, La. – The No. 3 LSU softball team returns to action on Wednesday afternoon by closing out a string of six consecutive games away from Baton Rouge with a doubleheader against the McNeese State Cowgirls at 4 p.m. at Cowgirl Diamond in Lake Charles.

Both games of the doubleheader will be televised live on Cox Sports Television with Lyn Rollins and former LSU head coach Yvette Girouard calling the action and Kelsey Wingert as the game’s sideline reporter. Each of the games will be streamed live on ESPN3 through WatchESPN online to markets outside of the CST broadcasting area, as fans living in the affiliate map of coverage on TV (http://southland.org/documents/2015/4/14/Affiliate_List_Feb192015.pdf) will have the game blacked out online.

LSU hits the home stretch of the season with three weeks remaining, looking to stay on pace for not only a high seeding as the host for the approaching SEC tournament in May, but locking down one of those coveted top eight national seeds for the NCAA postseason which begins in four weeks. The Tigers remained at No. 2 in the latest RPI rankings, falling just two spots to No. 3 in each of the weekly polls.

At 38-5 overall and 11-4 in the Southeastern Conference, the Tigers step out of non-conference play against the Cowgirls having dropped only one game to a non-conference opponent this season, that coming last week against Mississippi State in Starkville. The Tigers will be looking to avenge last year’s 2-1 defeat to McNeese at home last April, even though LSU holds the all-time series lead at 23 wins to just three losses to the Cowgirls.

Although the weekend ended with a loss for the squad, this history-making 2015 team still came away with another highlight moment as LSU earned its first-ever series win over the Tennessee Volunteers in Knoxville at Lee Stadium in program history. The Tigers had never won a series in Big Orange Country, as LSU has now taken two consecutive series against the Vols in back-to-back seasons. LSU took the first two wins by a 5-1 and 7-4 margin, before dropping the finale 8-5.

Thanks to her performances in all four games last week, Sahvanna Jaquish was named the SEC Player of the Week on Monday, pulling in LSWA Co-Player of the Week later that afternoon. The Highland, California, native had seven hits and drove in seven runs on the week, including a perfect 3-for-3 game, as well as hitting two home runs in a contest for the second time this year, increasing her team lead to 16 just one off of her record-breaking performance that earned her All-American honors as a freshman last year.

Bianka Bell still leads the team with a .485 average, 66 hits and .545 on-base percentage, while Bailey Landry has earned a hit in 12 consecutive games and reached base in 40 straight contests. Where the lineup has really began to produce is towards the bottom, with the charge led by Kellsi Kloss who hit three home runs last week, as homers were half of her total hits all week. Constance Quinn had a home run and tied her career high in RBIs with three in game two of the series against the Vols, while Sandra Simmons, Dylan Supak and Jenna Kreamer all produced hits at various key times for LSU this weekend.

The LSU pitching staff went up against two teams that came into the week hitting over .320 and didn’t come away completely unscathed, as the staff had their earned run average increase to 1.66, which still is the second lowest in the league.

Earning wins for the team during the series was Carley Hoover and Kelsee Selman, as Hoover struck out a career-best 12 in the opener against UT, while Selman came on in relief in game two and earned the win by holding off a Vol rally with runners on base and looking to mount a comeback.

While the pitching staff took the brunt of some solid offenses, the defense as a whole will look to clean up some miscues in the field to help in the total effort, as the squad has committed at least one error in each of the last five games, adding up to nine total.

McNeese State is coming off of a rain-shortened series loss to the Northwestern State Lady Demons in two games over the weekend, in a battle of teams contending for the Southland Conference regular season crown. Although the Cowgirls have lost their last three, McNeese is 11-7 at home in Lake Charles, owning a 26-17 record for a team that at one point was receiving votes in one of the top 25 polls.

LSU has already earned six wins over SLC schools already this season, and is 5-0 against Louisiana teams this year, with all of those games coming at home.