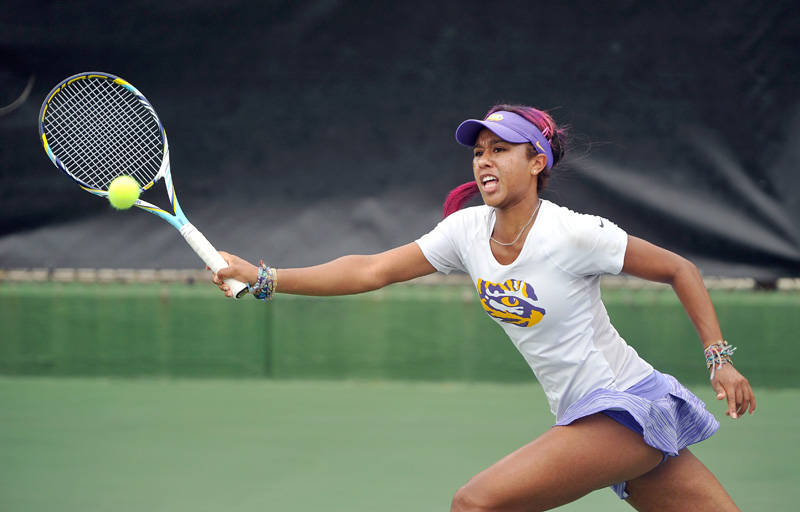 Sun., 10:25 a.m. Update: The match has been delayed to noon CT due to rain. Updates to be posted as necessary.

BATON ROUGE — No. 27 ranked LSU (17-8, 7-5) wraps up the regular season against eight-ranked Vanderbilt (15-6, 10-2) at 10 a.m. Sunday at W.T. ‘Dub’ Robinson Stadium. The match against the Commodores is the final home match for seniors Noel Scott and Mary Jeremiah as well as the final match ever at the ‘Dub’.

“I’m excited to go out and celebrate seniors Noel (Scott) and Mary (Jeremiah),” head coach Julia Sell said. “Vanderbilt is another top-10 team and we have to be ready to play. I like the way we’ve improved over the past couple weeks and it should be a great match.”

The Lady Tigers are coming off of another win over a top-30 opponent. LSU defeated No. 21 Kentucky on Friday, 4-0. In the process, the team secured a top-six seed at next week’s SEC tournament. This marks only the sixth time since 1991 that the Lady Tigers have finished in the top six of the conference.

Vanderbilt is coming off of a 4-3 loss at the hands of Texas A&M. The Commodores are led by Sydney Campbell on court one. Campbell is ranked seventh in the country in singles. Astra Sharma (44), Courtney Colton (80) and Marie Casares (88) are also featured in the latest singles ranking.

LSU is led by Joana Vale Costa, Skylar Kuykendall and Abby Owens on the top three courts. Vale Costa is 35th and Kuykendall is 76th in the ITA ranking.

Vale Costa is 13-7 and 7-4 in SEC play so far this season. The sophomore is 5-5 against ranked singles players on court one.

Kuykendall leads the nation in wins at 22 and is on an 11-match winning streak. The junior out of Jasper, Alabama is just the second Lady Tiger in the last 14 years to win more than 20 matches in a season.

Noel Scott, Ella Taylor and Skylar Holloway round out courts four through six for LSU. Taylor is 17-7 and 6-5 in conference this season. The Hampshire, England native is 7-3 in her last 10 matches.