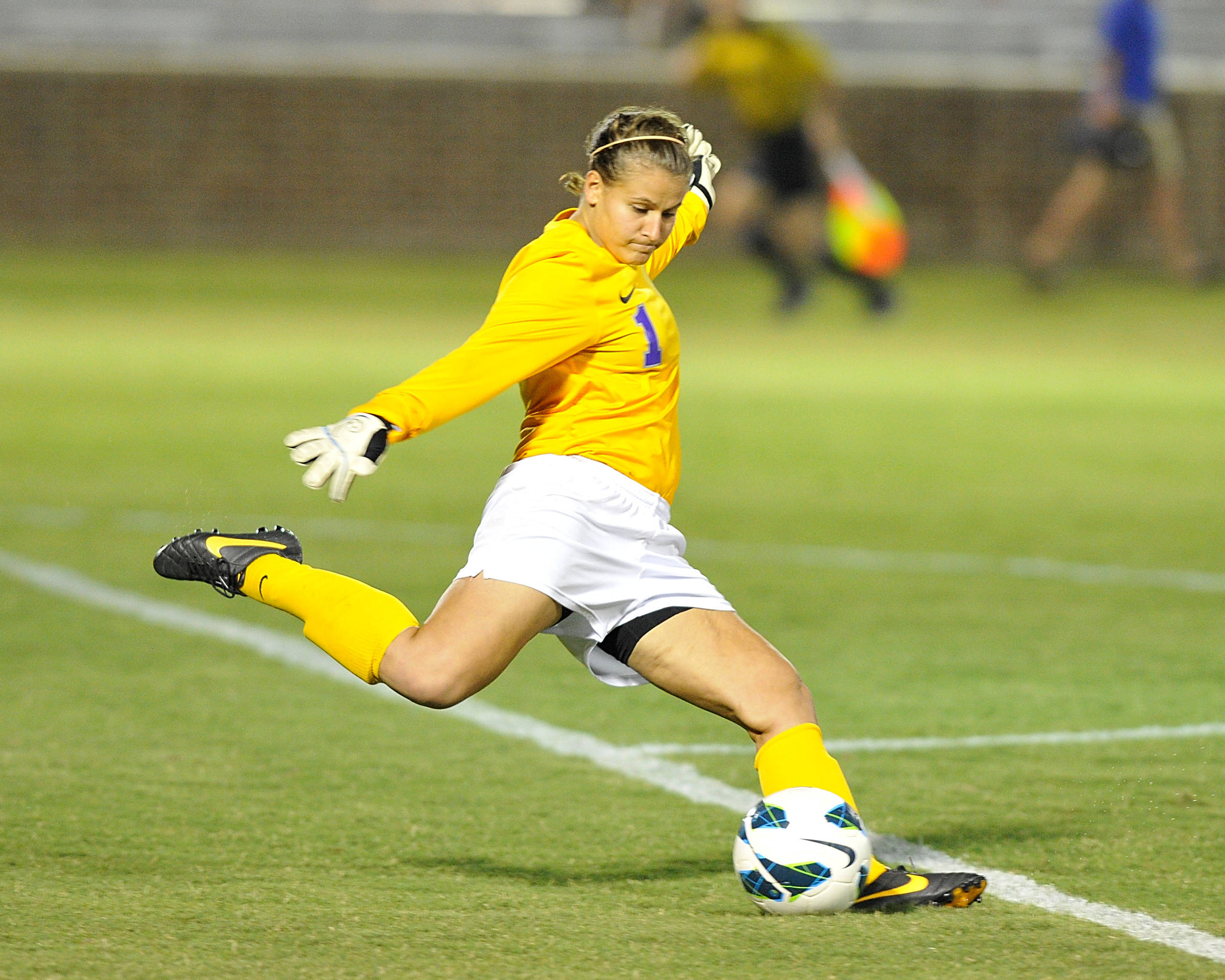 BATON ROUGE – Friday is officially Opening Day of the 2015 regular season for franchises in the National Women’s Soccer League, and former LSU Tiger goalkeeper Megan Kinneman will be named in the squad for the Houston Dash when they welcome the Washington Spirit to Houston’s BBVA Compass Stadium tomorrow night at 7:30 p.m. CT.

Kinneman is set to feature on the bench in the Dash’s season opener as she serves as the deputy to the team’s starting goalkeeper Bianca Henninger when they kick off against the Spirit on Friday night.

A standout goalkeeper with the Tigers for four seasons from 2010-13, Kinneman left Baton Rouge as one of the most decorated shot stoppers in the program’s history as the school-record holder with 284 saves during her collegiate career. She also ranks No. 2 among goalkeepers in team history with 17 clean sheets and No. 3 in school history with 24 wins and a 1.22 goals against average in her four seasons.

Not only that, but Kinneman also owns the single-season school record with a 0.66 goals against average during her rookie season with the Tigers back in 2010 when she was named to the SEC All-Freshman Team.

“Megan was an outstanding goalkeeper for our team and a great representative of our program throughout her time with us,” said LSU head coach Brian Lee. “We’re very proud of Megan that she has taken a big step up in her career and wish her the best of luck in the opportunity she has to compete at the highest level in this country while playing with the Houston Dash.”

Kinneman is not the only former LSU Tiger standout affiliated with the NWSL’s second-year franchise with three-time All-SEC defender and Canadian Women’s National Team standout Allysha Chapman being selected Monday by manager Randy Waldrum as one of the team’s seven defenders that will feature in Houston’s 18-player squad throughout the upcoming NWSL campaign in 2015.

Chapman will actually miss the Dash’s season opener on Thursday after starting in defense and playing the full 90 minutes for the Canadian Women’s National Team in a friendly match against France contested in front of 11,441 fans at the Stade Robert-Bobin Evry in the French city of Bondoufle. Canada fell by a 1-0 scoreline to the powerful French side on the night before returning to their home North America.

She has gone on to earn 12 international caps with 10 starts for Canada at the senior level in the past six months, highlighted by scoring her first international goal with the game-winner in the 51st minute in a 1-0 defeat of Italy in the semifinal round of the 2015 Cypress Women’s Cup back on March 10.

A three-time All-SEC performer and the 2011 SEC Defensive Player of the Year during her collegiate career, Chapman’s professional career has taken off after playing her final season with the Tigers in the fall of 2011. It is a career that saw her added to the Dash’s squad as an allocated national team player from her former club team Eskilstuna United DFF in Sweden.

“You could even see during her time with us that Chappy always had everything it takes to succeed at the highest level of this sport,” Lee said. “Not only is she a brilliant defender, but she also puts in the work, both on and off the field, to be the very best player she can be. That hard work is now paying off in a big way as she has firmly established herself with Canada as a full international and will soon continue her pro career with an up-and-coming Houston Dash team in the NWSL this season.”