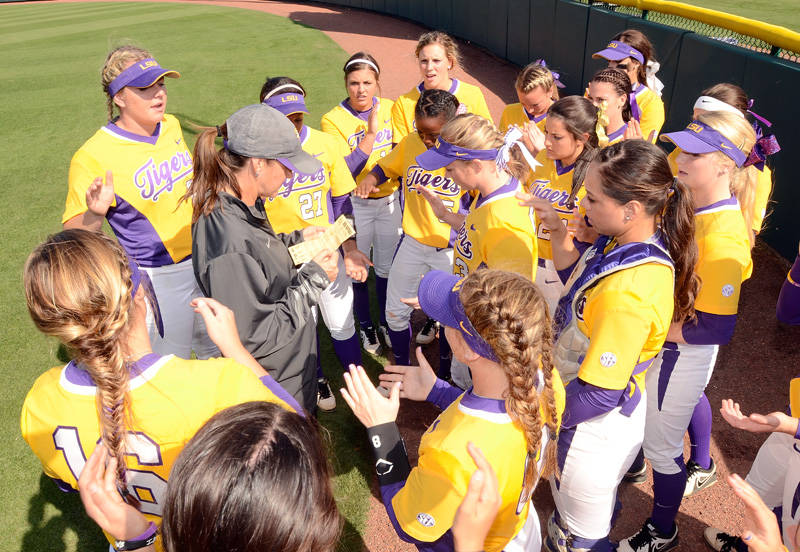 STARKVILLE, Miss. – The LSU softball team steps back into SEC play this weekend, opening a three-game series against Tennessee on Friday at 5:30 p.m. CT in Knoxville.

The Tigers and Volunteers kick off the three-game set on Friday as radio coverage on ESPN 104.5/9 locally in Baton Rouge picks back up with Patrick Wright. Saturday’s game at 4 p.m. at Sherri Parker Lee Stadium will be televised on ESPN with Beth Mowins and Jessica Mendoza, as Sunday’s finale at 1 p.m. will be streamed live on SEC Network+.

LSU will be looking to bounce back after suffering its first non-conference loss of the season on Wednesday night to Mississippi State, falling 9-4 to the Bulldogs at the MSU Softball Field in Starkville. The Tigers had won their previous 27 before the setback, heading into a big showdown with the 11th-ranked Vols as four weeks of the regular season will remain after.

“I think we have a group of players that came to LSU to play in games like this,” head coach Beth Torina said. “You come to play in the best softball conference in the country and against some of the best players in the world. Tennessee is a great team and they play well on their field, so we are going to need a complete team effort this weekend.”

Even with the loss, the Tigers sit at 36-4 on the season and 9-3 in the SEC, just a game back of Auburn in the league standings who are 10-2. LSU has been solid so far taking three of their four league series’ of the year, with two coming via sweep to keep pace in the top four, as LSU will be looking for its first road series win of the year in Knoxville.

Although LSU dropped the game the team didn’t drop its fight as the Tigers finished the game outhitting the Bulldogs 13-11 over the course of the contest, earning double-digit hits for the second consecutive game, and third time in their last five. However, LSU dug a hole too deep to eventually climb out of, and after making it a 9-4 game, left the bases loaded in the top of the seventh and left 10 total on base over the course of the game.

The reigning SEC Co-Player of the Week in Bailey Landry continued her torrid streak as she finished 3-for-4 with an RBI and two runs scored for the Tigers, as the Prairieville, Louisiana, native has earned multiple hits in four of her last five, with three games of at least three hits, while driving in a run in three of the four.

Also finishing with three hits was Sahvanna Jaquish, who went 3-for-3 with two RBI’s, including a double and a walk for LSU. In the process she set the single-season record for multi-RBI games in a season with 18, increasing her RBI total to 57. The last Tiger to finish with multiple hits was Dylan Supak, as the senior went 2-for-4 to extend her hitting streak to four games which is now the longest of her career.

What has been nearly automatic this season has been the pitching staff, but the core group ran into a hot MSU hitting team and the three pitchers the team used all gave up runs, as the Bulldogs tagged the group for an opponent season-high 11 hits, while giving up the second highest run total for an opponent this year as well.

Allie Walljasper suffered the loss to fall to 10-2 on the year, giving up three runs on five hits, while Carley Hoover gave up four on four hits in 3.1 innings, while Baylee Corbello gave up two runs on two hits in one inning. While giving up nine, only six of the runs were earned due to three LSU errors by the defense that allowed innings to continue.

LSu will face a Tennessee team that has won its last two after a midweek doubleheader earlier this week, but dropped a series at Auburn last weekend. The Vols have been an up-and-down team since the season began, as at 29-9 and 7-5 in the league, the season has seen the group sweep Georgia, while giving South Carolina its only two league wins this year.

Tennessee currently leads the series 26-22 with one tie, as LSU will be looking for its first series win in Knoxville in team history this weekend.